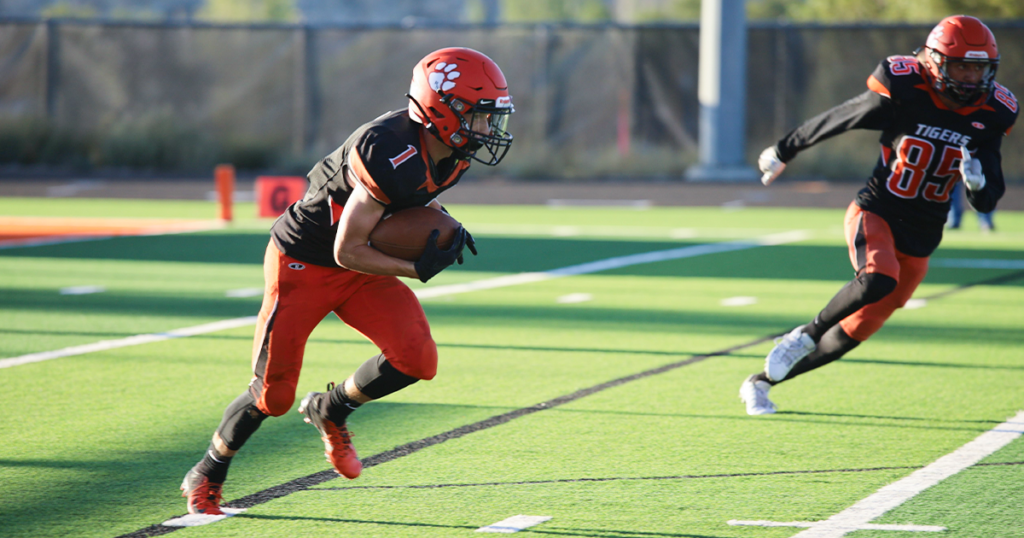 CASPER —  For the first time in 19 years, the Rock Springs Tigers beat the Natrona County Mustangs on their home turf on Friday night.

Rock Springs secured the victory late in the game with an interception by Jake Eddy to go up 21-7 in the fourth quarter.

The Tigers improve to 2-3 on the season, ending a two game losing streak.

It’s been a rough few weeks for the Rock Springs defense. From a heartbreaking loss in the final seconds against Kelly Walsh, to a blowout loss at home against Thunder Basin, the Tigers’ defense has had a lot thrown at them.

But to no avail, the Tigers responded on the road against a similar team in Natrona County. Up until the fourth quarter, Rock Springs held the Mustangs to a whopping zero on the scoreboard.

The defensive line had great success getting pressure on the quarterback and taking care of business up front. This was by far the best night the Tigers front line has had all season.

In addition, we saw Eddy’s interception late in the fourth quarter result in a turnover that was cashed in for six points. Turnovers have been inconsistent for this defense, but to have the interception for six points tonight was a nail in the coffin.

No doubt this game will serve as a huge confidence boost as the back half of the season is played. Until tonight, Rock Springs had not won a game at Natrona County since 2001 when they beat the Mustangs 21-7. That’s a big deal and a streak-ending win like this can provide the type of confidence that changes the way players and coaches think.

Each week the Tigers have improved in different ways regardless of what the scoreboard reads. Tonight, the Tigers played an entire game of football from start to finish, something they haven’t been able to put together this season. To do so in the middle of the season on the road against a team that has historically dominated you is no easy task.

This game could be a turning point in the season and the very game we look back at when the season comes to an end.

This week, my game ball goes to the big man AJ Kelly.

Kelly had an incredible game, leading the way on both the offensive and defensive lines. He had a huge sack in the backfield putting Natrona in a difficult fourth-and-long situation in the final minutes of the game.

You love to see the big guys make big plays. Tonight, Kelly did just that.