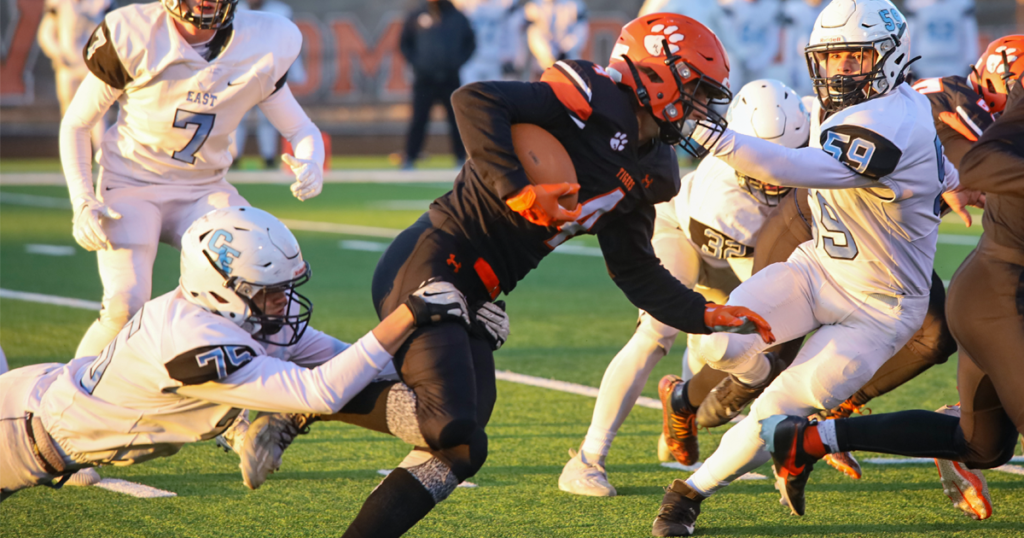 Jake Eddy makes his way down the field against Cheyenne East on Friday night. Photo by Brayden Flack

The top three matchup between the Tigers and Thunderbirds was about as close to a playoff game at home that Rock Springs will get. With both Natrona County and Sheridan winning their football games, the Tigers secured the fifth seed, earning a trip to Sheridan next Friday for the first round of the playoffs.

Rock Springs finished the regular season with a 5-4 record, winning four out of the last five games on the schedule.

Prior to Friday night’s action, the Tigers had committed five turnovers all year — an impressive statistic for a high school football team.

However, the Tigers had a sloppy game against Cheyenne East, turning the ball over three times. Two interceptions and a fumble did nothing but hurt an offense that struggled to play catch-up with the Thunderbirds.

Quarterback Brock Bider has played clean and made smart decisions throughout the season. The first interception of the night was uncharacteristic of Bider and simply put — a mistake. Rock Springs was in scoring position and good coverage on a pressured throw resulted in a costly turnover.

Jake Eddy also fumbled the ball in the second half, though he appeared to be down before the ball popped loose.

Turnovers happen. I wouldn’t stamp tonight’s performance in terms of possessions as what we’ll see next week in Sheridan.

My game ball goes out to the offensive line who dominated the trenches in the second half.

Rock Springs opened up the second half with an impressive drive that only saw one pass play. Smash mouth football was the game plan in that opening drive and Cheyenne East couldn’t get off blocks. The entire offensive line opened up holes big enough for two-lane traffic.

If there was one takeaway I had from this game, and maybe it’s been obvious throughout the season, it’s that the Tigers have one of the best offensive lines in the state. Their size and mobility have allowed their team to take it to the next level.

Touchdowns win games and the Tigers didn’t have enough of them tonight, despite throwing up 26 points aginst the best team in the state. Even though Captain Obvious knows touchdowns matter, we saw the difference between a team that can score touchdowns at will and one that can’t.

Give Cheyenne East credit, they can do it all. From running the ball to throwing the deep ball, this offense clicks. It’s impressive and fun to watch.

Although Rock Springs isn’t Cheyenne East quite yet, the Tigers have taken steps towards transforming into the type of offense that can score at will. We’ve seen flashes of that in the Cheyenne South, Cheyenne Central and Natrona games.

But tonight we saw a spectacular performance from Cheyenne East, and perhaps, a glimpse of the future for this Rock Springs Tigers offense.

One touchdown at a time.