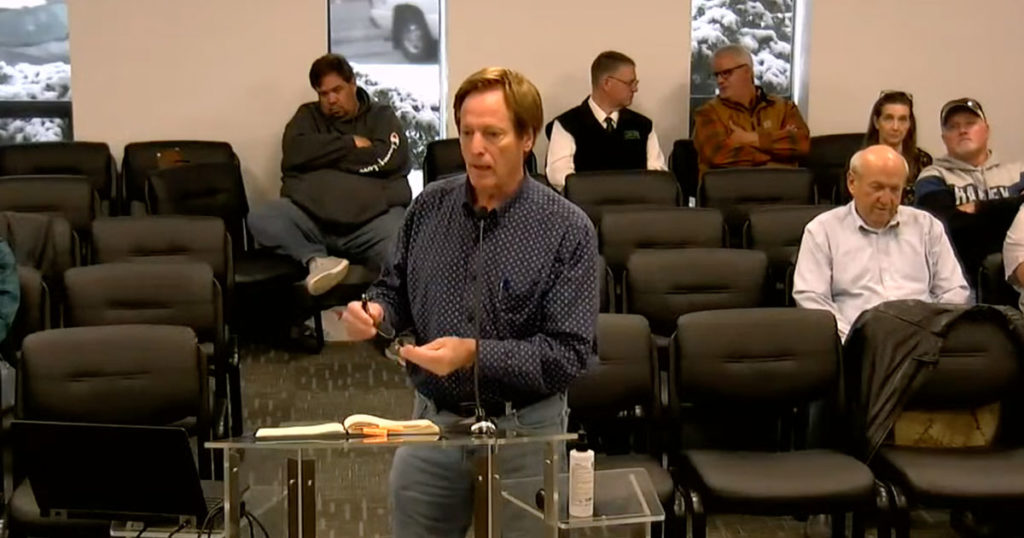 SWEETWATER COUNTY — Love’s Travel Stop has been hauling its sewage to Green River’s wastewater treatment plant for over a year due to a faulty septic system, and now they are proposing a new system that would discharge sewage into the Green River.

Due to the cost of hauling the sewage, Love’s is now proposing to amend their existing Conditional Use Permit to change from an underground injection sewage disposal system to a sanitary sewage treatment system. The sewage would be treated with an activated sludge wastewater treatment system, and the treated effluent, or sewage, would be sent to the Green River.

The existing system includes a septic tank and leach field, in which the leach field failed and is non-functioning. Scott Huismann, Director at Apex Companies, LLC, the designer for the new proposed system, explained that the new system would use the existing septic tank for solids separation. The waste would then go through a tertiary treatment system before being discharged into the river.

The primary concern is how the treated sewage going into the Green River would affect the water quality for local residents since the proposed treatment system will only be four miles upstream of the city.

“I can understand the rationale for the proposed WWTP (wastewater treatment plant) and the need for improvement at the site. My biggest concern is that its effluent is monitored closely and frequently so that our drinking water source is not impacted,” said Brian Seppie, Joint Powers Water Board (JPWB) General Manager in a letter to the Planning & Zoning Commission.

The Planning & Zoning Commission echoed this concern, noting that currently Rock Springs and Green River have some of the best water in the state.

“Green River and Rock Springs are the very first point of contact for the Green River for our supply of water. We don’t get any pollutants from anything upstream. We have the Fontenelle Reservoir to stop anything that we have. We have some of the cleanest water in the state so for us as a community, this is a hard pill to swallow,” Planning & Zoning member Jon Doak said.

Eric Bingham, Sweetwater County Land Use Director, noted that $9 million of the recently-approved Special Purpose Tax is dedicated to a sewage line that would run from Jamestown to Green River.

“Our best option for economic growth right now is west of Green River. A sewage line would provide great opportunities for that.” Bingham said.

Bingham, as well as the member of the Planning & Zoning Commission, said the proposed system cannot be a long-term solution. He added that since the proposed treatment plant at Love’s is a private one, rather than a public one, maintenance is a concern.

This is our drinking water, we need to protect it.

Kym Van Dyke, Real Estate Development at Love’s, said that they would prefer to hook into Green River’s sewer system instead of installing their own treatment plant, however they need an “interim fix” until that sewage line is built and completed.

He said that while he understands the concerns of drinking water quality, the Wyoming Department of Environmental Quality (WDEQ) has already approved this system.

Jason Thomas, WDEQ Wyoming Pollutant Discharge Elimination System (WYPDES) Program Manager, said that the state does require monitoring for phosphorus. However, he said that, “the state does not have a numeric criteria for phosphorus so there’s really no limit to be had at this point in the permit.”

Seppie noted in his letter that, “this concern is made worse by the drought conditions experienced in the Green River basin.”

Doak asked if Love’s could wait a couple years until the sewer line is built, and whether that would save them any money. He said the community would more than likely support hooking up to an existing sewer line rather than building a packing plant, considering the plant would be just four miles upstream.

“If they can wait a year and a half to tie into a trunk line, more people are going to be in favor of that than you putting a packing plant in,” Doak said.

Van Dyke said that ever since he started working with the county on Love’s Travel Stop, there has been talk of the Jamestown sewer line. However, even now that the Special Purpose Tax passed, there is still no timeline for when it will be built.

We’re going to look at anything that it takes to get out of the situation we’re in and not be harmful to the local citizens. That’s the last thing that we want to do.

While everyone seemed to agree that hooking into the sewer line once it is built is the long-term solution, Angela Wilson, Planning & Zoning Chairperson, said that it could be five to 10 years until that project is completed.

The Planning & Zoning Commission asked what worst case scenarios could look like if the water was contaminated. Michael Tardoni, engineer for the Joint Powers Water Board (JPWB) said that they do tests every few hours to ensure the community’s water quality is good. He added that water flow rates and droughts affect measurements and pH balances.

“In those cases, if we saw something that was significant, we would actually go to the reservoir,” Tardoni said.

In a worst case scenario in which the community is experiencing high droughts and the river was contaminated, Tardoni said the water supply would have to be shut down until they could remedy the issue. This would mean that Rock Springs and Green River would be limited to water existing in their tanks.

However, Huismann said their system comes with an extensive alarm system that would immediately alert Apex, the utilities services, and Love’s of any issues. JPWB Chairman Terry Leigh said that he would like to add a stipulation that the board is notified immediately upon any upset conditions so they can respond as well. He added that he would also like to delay this system until more details are developed on hooking up to a public system. Leigh believes that is the solution and this proposed system is a “temporary bandaid”.

Due to the undetermined timeline for the Jamestown sewer line, the Planning & Zoning Commission voted to recommend the proposed treatment system to the Sweetwater County Commission for approval. This recommendation comes with a list of conditions that aim to protect the water supply and adjacent properties. Part of those conditions is to have the system monitored regularly and consistently.

To listen to the entire discussion that took place at the Planning & Zoning Commission’s meeting, click here. The discussion begins at 56:55.