Reliance is in the dark, while across US 191 North lights are burning.

UPDATE – Electrical service was restored to Reliance around 12:50 a.m. after going out around 8:05 p.m.

RELIANCE — The lights are out in Reliance; the outage began around 7:00 p.m. and appears to be impacting the entire town.

According to Rocky Mountain Power as of around 8:05 approximately 450 scattered customers were without power in the Rock Springs area total.

That number may or may not include the outage in Reliance, which has 249 households according to the 2010 census.

Margaret Oler with Rocky Mountain Power said that crews are working to restore power to the scattered customers. She explained that as the major problems are resolved the smaller issues become apparent. 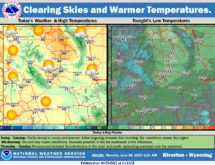