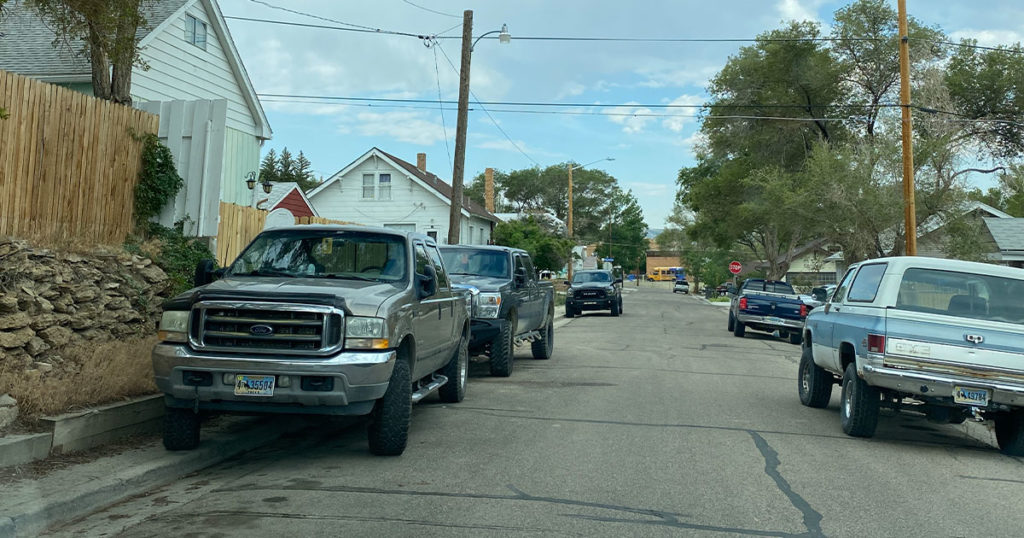 Some residents on New Hampshire Street have been parking on the sidewalks so there is enough room for vehicles to drive down the narrow street. SweetwaterNOW photo by Stephanie Thompson

ROCK SPRINGS — After a resident asked the city why his neighborhood was no longer allowed to park in right of ways or on sidewalks, the city decided it will look at the narrow streets in that area and see if something can be done to improve the parking issues and safety concerns.

During a recent Rock Springs City Council meeting, Rock Springs resident David Nowland, who lives on Connecticut Avenue, approached the Council to find out what to do about constant parking-related issues on New Hampshire Street.

Nowland said he recently received a letter from the City of Rock Springs informing him he could no longer park in the city’s right of way, which is nothing more than a dirt lot. Nowland brought a copy of the letter he received to the meeting.

The letter states “The City of Rock Springs would like to remind you for the safety of the citizens and the community the following are ordinances. We have received complaints regarding these ordinances which are becoming a hazard.” The letter then provides a list of all the ordinances currently being violated, including Wyoming State Statute 31-5-504 -Specific places where parking prohibited, State Statute 31-5-512 Parking alongside curbs or on the edge of roadways, and City of Rock Springs ordinance 5-305 parking in certain locations prohibited.

The following is a photo of the letter Nowland and that entire neighborhood received from Rock Springs Police Department nuisance and parking officer Julia Nieto.

Nowland said the street is so narrow that residents in the area don’t have any choice but to park on the sidewalks or in right of ways. According to Nowland, the lack of space has contributed to recent accidents in that area. He wanted to know if he is no longer allowed to park in the city’s right of way, where else is he going to park.

“As it is right now you couldn’t get an ambulance, a fire truck, or a snow plow down it,” Nowland said.

Paul Kauchich, Director of Engineering & Operations, said the city does have quite a few very narrow streets in that area and parking has always been an issue. Some of them have been changed to one-way streets to help with parking and traffic flow issues. However, when determining which streets should become one-way streets always brings residents’ concerns on who can park on the side where parking is allowed. On top of the narrow streets, a lot of these homes do not offer residential parking, which only contributes to the problem.

“We can look at this New Hampshire area again and see if there’s something that could be done,” Kauchich said.

Rock Springs Fire Department Chief said they as for as not being able to access this area it hasn’t necessarily been a problem, however it could become an issue very easily.

Rock Springs Mayor Tim Kaumo said New Hampshire Street, Connecticut Avenue, Rhode Island Avenue, and Wyoming Street has got to be the worst part of town for narrow streets. He said it’s not a good situation and there’s not a lot of room to help because the front yards in those areas are already small. To make matters worse, on Rhode Island in particular residents have been parking fifth-wheel trailers, campers and toy haulers on the street and on top of the sidewalk. He suggested they might be able to move a portion of the sidewalk in some areas to help.

Nowland still wanted to know what can be done now to help with the situation.

“I’ve parked on this dirt for three years,” Nowland said.

Mayor Kaumo said he needs to leave his vehicle on the road while the city looks at it.

He didn’t understand why the issue was coming up now and asked the city if he could continue to park there.

RSPD interim Police Chief Bill Erspamer said the city received several complaints about parking and other issues in this area. When the parking and nuisance control officer visited the area to see what the violations were, the officer quickly discovered almost everyone parked in that area was in violation. Instead of writing everyone tickets or citations and having vehicles towed, the officer returned to the office to speak to Erspamer about it. They decided it would be best to write a letter and to inform residents in that area that they were violating Wyoming statutes and a city ordinance instead of writing citations out to everyone.

Councilor Robinson said the police department is just trying to enforce Wyoming state statutes and in his opinion made the right choice in sending out letters instead of citations. However, that doesn’t mean residents can continue to park the way they were.

“We’re not here to allow you to break the law,” Councilor Robinson said. “I think the police department is doing the best they can to mitigate it as best as they can.”

The city told Nowland they would look into this issue and see if they could come up with some solutions. In the meantime, residents must abide by the statutes and ordinance listed.