While most of the city was not impacted by the Monday storm, residents along Lionkol Road were again left scrambling due to flooding. Penny Kramer addressed the Rock Springs City Council about the issue.

Kramer said they were again left to battle flooding issues after a storm on Monday. While Kramer said city crews and city officials were on scene working after the storm, it is upsetting they continue to battle these issues. She asked the city if they had looked at the problem and what was going to be done about it.

The city had a workshop a couple of weeks ago to debrief on the issues in the city after the flooding in early July. Rock Springs Mayor Carl Demshar said since the meeting, they have started to discuss with other entities about partnering with the city to fix the issue. He said the groups agree a retention pond is the best way to go.

Demshar was again in the area Monday after the flooding issues were reported. He said he drove up near the corrals and took a closer look at the area. While a retention pond is a long-term solution to the problem, Demshar said they are looking at short-term fixes to help the residents in the area.

Director of the Rock Springs Engineering Department Paul Kauchich was asked to speak on the situation. Kauchich said the property above the area is owned by the Bureau of Land Management and the Union Pacific. He said they have talked to the BLM about retention ponds in the area and the BLM has already started doing their own research on the issue.

Kauchich said when they complete the research they will call a meeting to discuss what they have found.

Kramer said she has lived in her home in the area for 27 years. She explained the earliest flooding issues she could remember started happening in 2007. She said since the flooding in 2007, they have flooding in 2013 and twice this year. She asked the council if something had been done in the area which is now causing these problems.

Both Kauchich and Demshar said they thought the BLM had done some work up by the horse corrals but had no idea if that would have changed anything.

Councilman Rob Zotti noted that when he was out there in 2013 when issues arose, he noticed up by the horse corrals water was running across the road from the north side to the south side. He said there was much more water running down on the south side of the road.

During the July 6 flooding, residents from the mobile home park down from Desert View School spoke to the council about the incredible amount of damage and water they dealt with. Demshar said when he was in the area on Monday assessing Lionkol, he also was curious to see what was going on up that way and drove over.

Demshar explained he was amazed at how spotty these flooding issues really are. He said while he watched the flooding down by Ponderosa and Lionkol there was nothing coming down above the school on Monday.

Overall, Demshar said since the major flooding in early July the city has identified and started investigation the problem areas in the city. He said Kauchich and his crews have worked extremely hard and deserved recognition. 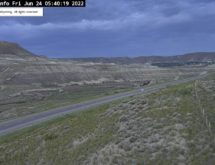 Mostly Sunny a High Near 76