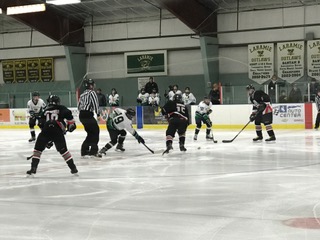 LARAMIE – After dropping two to Laramie to open the season, the Rock Springs Miner Bantam squad got a little revenge this past weekend.

After a hard week of practice, the young bantams headed to Laramie looking to get wins. The hard work paid off as the second round of games against Laramie both went to the Miners.

In the first game, the teams played even in the opening period. At the four-minute mark in the second, Shane Johnson put the Miners on the board first. Two minutes later, Rock Springs added to its lead. Israel Maestas scored on assists from Isaiah Maestas and Brody Costigan to put the Miners up 2-0. Laramie added a goal late in the second period to cut the lead in half.

The third period was played even as neither team added to the score giving the Miners their first win.

The second game between Laramie and Rock Springs was even through the first two periods as neither team could break through. Finally at the seven-minute mark in the third, Maestas punched it in again. The Miners added an insurance goal as Johnson scored his second of the day with Costigan adding another assist.