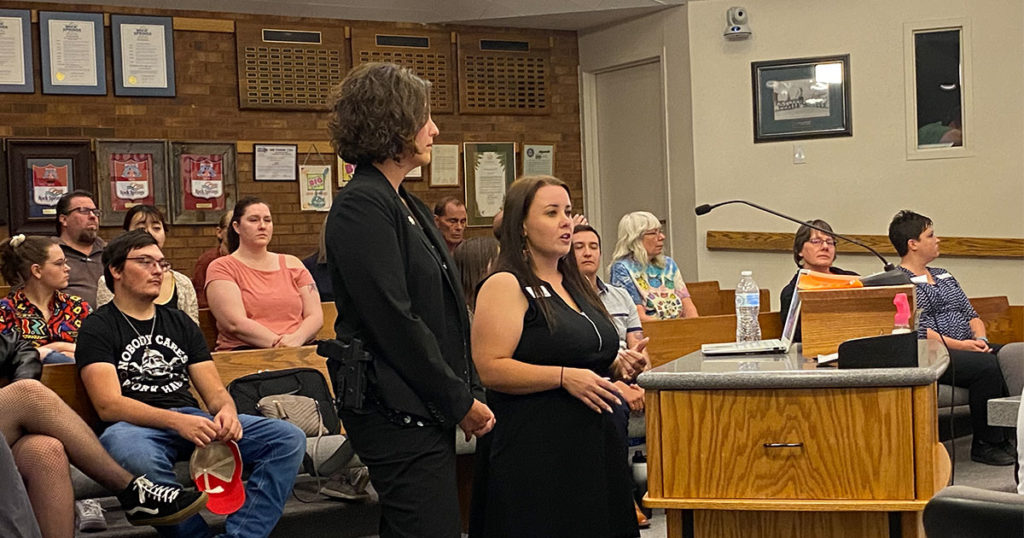 ROCK SPRINGS — Uprising, a nonprofit group that educates communities about human trafficking, is asking the City of Rock Springs for help in the fight against sex trafficking in Rock Springs.

During a recent Rock Springs City Council meeting, Uprising Cofounder and Executive Director Terri Markham said Uprising’s mission is to educate communities about what human trafficking is, what to look for, and what communities can do to fight it.

“Human trafficking is when a person is forced or manipulated into providing commercial sex acts or forced labor and a third party or employer is profiting off of the exchange,” according to Uprising.

“It’s very common, most people think it’s a stranger, but it’s actually less than 1 percent of human trafficking cases in the U.S. that are perpetuated by a stranger,” Markham said. “It’s usually someone you know and trust. We see by far the most exposures that I get are familial cases. So it’s a family member that’s trafficking them. Typically a parent, spouse, aunt, uncle or grandparent. I’ve seen all of them.”

Sweetwater County Sheriff’s Office (SCSO) Sgt. Michelle Hall said she sees a lot of pimp controlled, but familial is by far the largest. “You just don’t read about it because we can’t post it in the newspaper, but we have that all over our county.”

Markham went on to say that youth are also being marketed and the Wyoming and the Department of Criminal Investigation rescued 32 children last year.

Markham said the reason why this particular crime goes unnoticed is because often times the victims themselves don’t realize they are being trafficked. Like most people, the victims also have an idea of what human trafficking may look like, such as being locked in a basement or being sold out of one motel room to another motel room, but often times that’s not what it looks like at all.

“Most of the survivors I know, it’s 5 to 10 years after their victimization before they realize that what they experienced was actually human trafficking,” she said.

Sgt. Hall said she attended a training in December and said it completely changed her perspective on what human trafficking really is compared to what she thought it was. This has made Hall realize that a lot of cases she had investigated in the past were actually human trafficking cases, but she didn’t know it.

While Uprising has tried to change legislation, it hasn’t made any headway yet. However, they will continue their efforts and the Rock Springs Council said it would give them support in doing so and even asked for a list of legislators who need educating on the subject.

“It is a big problem in Wyoming and a big reason for that is because we really don’t have any regulation on our massage industry,” Markham said. “You can actually be a masseur here without any kind of massage license, without certification or going to school for that, so it makes it really attractive for people who are running Illicit Massage Business (IMBs) to move to areas like ours and open those kinds of businesses.”

She said surrounding states are seeing the same thing and used Billings, Montana, as an example. She said Billings had a huge IMB problem and even conducted a four-year study that showed they had more IMB trafficking per capita than New York City. Billings passed an ordinance aimed at code enforcement and since then have closed 10 of those IMBs within the last year and none of those have tried to reopen in their state.

For the last two years, the SCSO has been conducting an investigation on two Rock Springs businesses Sgt. Hall said.

“The reason why I am here to talk to you about it today is I came up against a wall and we can’t go forward with an investigation,” Sgt. Hall said.

She said she knows sex acts were being performed at two of the IMB’s, but unfortunately they do not fall under any current crimes. The sex acts being performed are known as “happy endings,” which are manual stimulation and aren’t in Wyoming statutes. Sgt. Hall said she would like the RS Council to update its ordinance to be changed to add language to include “happy endings” as a sex act. She also included sample ordinances for the Council to look at, including the City of Billings and a proposed ordinance the City of Green River is looking at now. Sgt. Hall suggested the Council come up with and ordinance that uses a combination of the two ordinances.