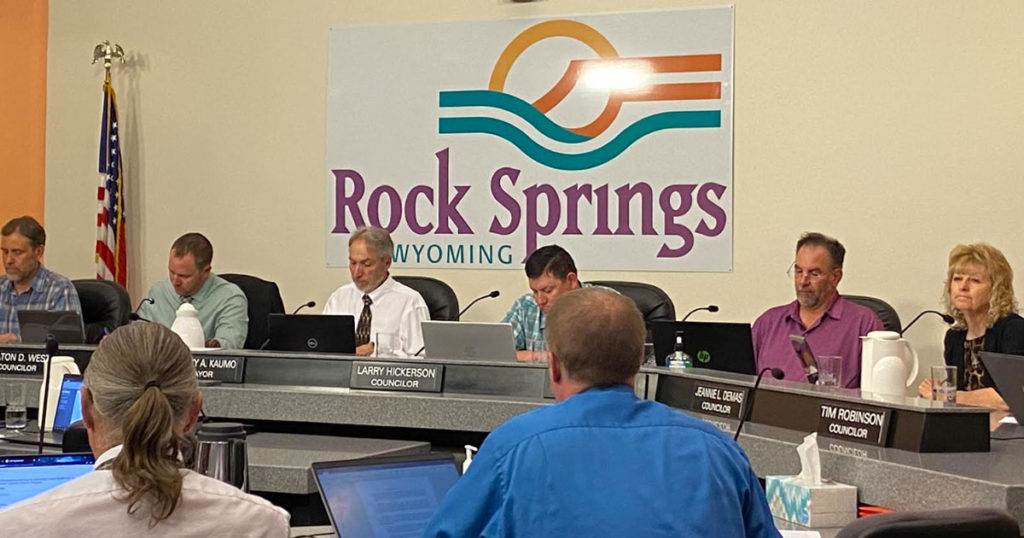 ROCK SPRINGS — After a brief discussion, the Rock Springs City Council passed a resolution allowing the one-cent specific purpose tax to be placed on the General Election ballot in November.

The resolution was added to tonight’s agenda after the Sweetwater County Commission approved a similar resolution at its meeting this morning. The Council’s vote was not unanimous with a 6-3 vote. Councilors Keaton West, Rob Zotti and Brent Bettolo voted against the resolution, while Councilors Dave Halter, Tim Savage, Larry Hickerson, Jeannie Demas and Tim Robinson and Mayor Tim Kaumo voted in favor of the motion.

The resolution approves the imposition of a one-percent specific purpose sales and use excise tax in Sweetwater County and the proposition will be placed on the November 8, 2022, General Election ballot. The total requests from the cities, towns, and the county, including the bonding costs, are around $83.5 million.

Councilor Zotti wanted to know what the plan was to educate the public about the tax because he hasn’t seen anything.

“I believe the public is still in the dark about this and how it is different from the last one,” Zotti said.

Councilor Robinson, who sits on the specific purpose tax committee, said he believes there are several local entities, such as both chambers of commerce, the Sweetwater Economic Development Coalition and the Sweetwater Travel and Tourism that will be working on this. He said they are still developing this portion of the plan.

Mayor Kaumo said there are some people out there who still believe this is a general purpose tax and it’s not.

Robinson said he understands they are bringing this forward during troubling financial times for residents, but these projects are only going to get more expensive.

“The longer we wait, the more expensive it’s going to be in the future,” Robinson said. “Unfortunately, if some of these projects aren’t completed, there will be services people will have to pay more for or it may just be eliminated completely. I don’t think that’s good for the long-term future of Sweetwater County…”

Mayor Kaumo said what all of the Councils and the Commission is trying to do is get these projects before the voters and let them decide.

“We’ve heard time and time again, ‘we’ve just voted that tax down,’ ‘what are they doing now trying to backdoor this again?,'” Mayor Kaumo said. “This is not the general purpose tax. This is very specific.”

Kaumo said all of the specific projects have costs associated with every, single, one of them. “I can’t stress that enough,” Mayor Kaumo said.

West said it’s been no secret how he’s felt about the tax. He said Commissioner Randy Wendling’s comments at the commissioner’s meeting this morning about him using this as a way to forward his political career is not true.

“This has nothing to do with seeking another office or anything of that nature. It’s doing what I believe is best for Rock Springs certainly, but also the county and what I think constituents represent,” West said.

West said he views this similar to why he wasn’t in favor of the general purpose tax because of the pandemic residents were suffering and he believes this situation is similar to what the community is facing now.

Zotti said this has been a really tough decision for him because he knows how much all of the communities need the money, however, they still don’t have a plan on how they are going to inform the public. He’s afraid if this tax doesn’t past, it may take a long time before they could try again.

“From what I’m hearing from everybody, this is going to be a tough one to pass,” Zotti said.

All of the Councilors who voted against the resolution wanted to make it clear that they do support the projects.

To review the entire resolution, see the document below.

The Council approved a request from the Rock Springs Police Department to apply for the Edward Byrne Justice Assistance Grant Program 2022. If the department is awarded the $15,427 grant, it will collaborate with police consulting services to develop and maintain policies and training. The RSPD will work with Sweetwater County to combine the JAG grant services.

The Council also approved a request from the Rock Springs Fire Department for a Wyoming Department of Transportation ARPA Radio Grant to replace radios that are past factory support.

Under resolutions, the Council approved a service agreement between the City of Rock Springs and Rock Springs Young at Heart, to provide senior services to Rock Springs residents.

A service agreement between Sweetwater County Transit Authority and the City of Rock Springs to provide public transportation to Rock Springs residents for $34,000 will also approved.