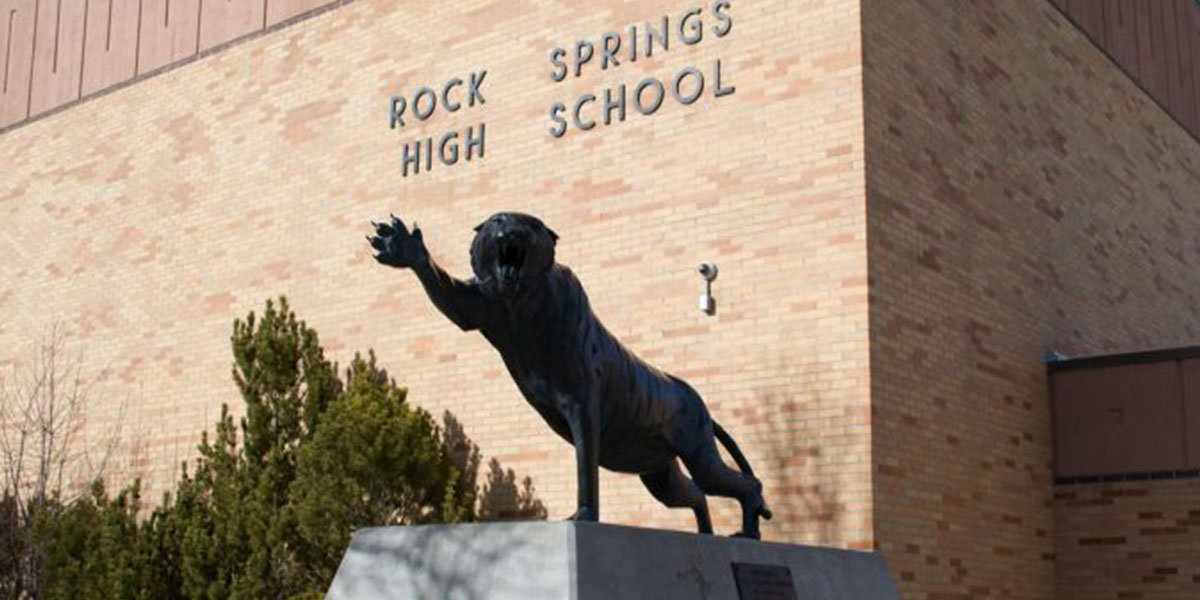 ROCK SPRINGS — On Thursday afternoon, a group of Rock Springs High School students were reported to be carrying around political flags supporting U.S. President Donald Trump. Photos of the group were posted to social media by a few students. One Facebook post said the following:

“WE DID IT!!! Might’ve taken me getting a ticket with a court date and 4 days of Out Of School Suspension but we successfully supported our president today! It was a great turnout!!!”

According to RSHS principal, Annie Fletcher, and Sweetwater County School District No. 1 Superintendent, Kelly McGovern, the school suspension was unrelated to freedom of speech.

Here is the timeline that we’ve been able to piece together.

As part of a school project to create a bulletin board for the RSHS preschool, one student made a “Trump 2020” board. After the poster was put up, students began leaving class and gathering at the board to sign and add personal comments.

According to Fletcher, students who left class were “a disruption to our learning environment.”

Another student became upset by the alleged racial nature of a handful of comments and took the board down. Other students involved have said that there were no racial remarks on the poster.

“All of these claims are being fully investigated,” Fletcher said. “The focus is not political, but about maintaining a safe and inclusive environment. No student has been disciplined for the political affiliation piece.”

On Wednesday evening, according to both Fletcher and McGovern, SWCSD No. 1 and RSHS became aware of several online group chats that were turning confrontational.

As a result of the heated group chats, Fletcher made an announcement on Thursday morning to the entire school to remind students to exercise “respect for other differences and viewpoints.”

“Before class started, an announcement was made that said we were able to wear hats, and shirts but not allowed to carry flags,” a student said.

Fletcher said that district policy says,”… within certain limits, each student’s mode of dress and grooming is a manifestation of personal style and individual preference. The Board will not interfere with the ability of students and their parents to make decisions regarding their appearance except when their choices affect the educational program of the schools or the health and safety of the student or others.”

Fletcher and McGovern also stated that the group had flags in the back of their vehicles, but the students were not asked to remove any flags.

One student was suspended, but it was alcohol-related. The suspended student had been part of a group of students that had planned to wear Trump gear and flags to school the next day to show their support for the President. Initially, the students planned to take a photo in the gym, but they were reportedly told they couldn’t take political photos on school property.

The students decided to go to Veterans Park to take the photo. They met at the Kum & Go nearby.

According to multiple sources, employees of the Kum & Go then reported to the school that there was a group of students drinking beer.

A student was given four days of out-of-school suspension and a ticket for having an empty beer can in the back of the truck when the group returned to the high school.

A screenshot of that student’s Facebook post said, “Since people jump to conclusions I would like to make it clear that the suspension was because of an empty beer can in my pickup.”

“We continually seek balance, looking for how to help students responsibly and respectfully share different ideas and view points while still continuing to create a space where students are safe and respect each each other,” Fletcher said.

More details will be reported if they become available.