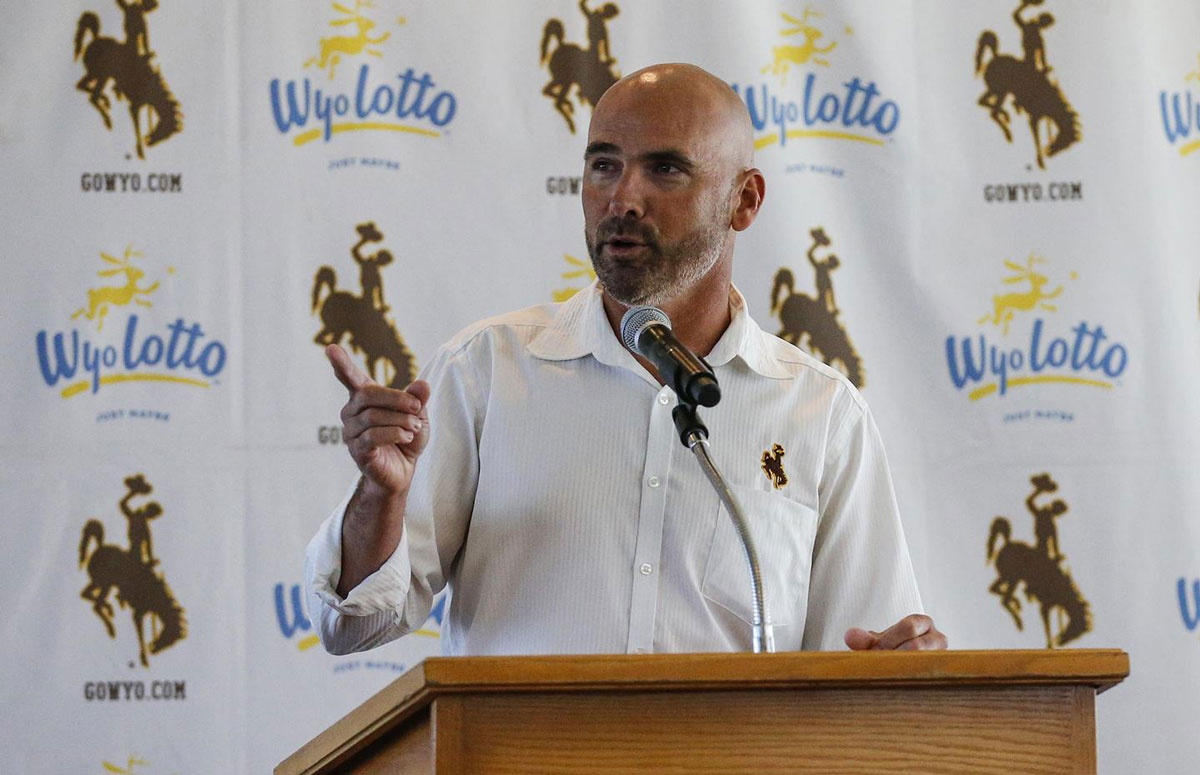 “We are very excited about the addition of this group and what they will bring to our program and the University of Wyoming,” Berryhill said. “There were specific event areas we wanted to address in finalizing this year’s recruiting class and we accomplished that goal.

High School: Competed as a thrower at Mount Vernon High School (Wash.)… As a senior, was the state champion in the shot put, breaking a school record that stood since 1975…Finished fifth at state in the discus… As a junior, placed second at state in the shot put… Was a team captain during both his senior and junior years and was first-team all-state those same seasons… Also competed in football… Was a team captain as a junior and a senior and was honorable mention all-conference as a junior and senior… Played basketball as a sophomore and was a team captain and was named the team’s MVP… Was a member of the National Honor Society and a three-time member of the honor roll… Graduated in the top-25 percent of his class.

“Danny is a gritty, explosive athlete who improved tremendously in his senior year of high school.  He will be a welcome addition to our shot put group.” – Carrie Lane

High School: Competed as a thrower for Sheridan High School, earning three letters… As a senior, was the regional champion in the shot put and discus, as well as the state champion in the shot put with a runner-up performance in the discus… Earned all-state honors as a junior, as her team finished fourth at state, and she earned her team’s “High Point Award” for scoring the most points on the team throughout the season… Also competed in soccer, volleyball and basketball… Earned all-conference honors as a junior in basketball… Earned all-conference honors in volleyball as a junior and senior and was a team co-captain both years… Was a member of the honor roll all four years of high school, was a member of the National Honor Society and finished top-10 in her class.

“Jordan’s multi-sport background and recent throwing success are a great combination. She finished her senior year as the top thrower in Wyoming and we are lucky to have her on our squad.” – Carrie Lane

High School: Earned a total of nine varsity letters in three different sports at Kelly Walsh High School… In track & field, was the region champion in the high jump and triple jump while finishing second in the long jump as a senior and was the meet’s high scorer… At the state meet, finished third in the long jump and high jump and finished fourth in the triple jump… Named the Gerdom Award winner as Kelly Walsh HS’s top male athlete… Finished third at state as a junior in the high jump, following the regional meet where he finished second in the long jump, and triple jump and third in the high jump… Was a part of three state championship teams at Kelly Walsh… In basketball, was a first-team all-conference selection as a senior and a team captain as a junior… Won state titles as a team during his sophomore and senior seasons… In football, was a team captain and a second-team all-conference selection at wide receiver as a senior… Earned Wyoming High School Activities Association Outstanding Scholastic Achievement Award for football as a senior and basketball as a junior… Was a member of the honor roll every year of high school and graduated with a 4.0 GPA.

High School: Competed for Cheyenne East High School… As a senior, won the state title in both the indoor and outdoor triple jump… During the indoor season, finished third at the state championships in the 55m hurdles and third in the high jump… During the outdoor season, finished fifth in the 110m hurdles at the state championships… Also won the triple jump state title as a junior and was the state runner-up as a sophomore.

“Mikey will join his sister, Logan, on our throws squad.  He previously played football and I like his commitment to the weight room.  I’m excited for him to spend an entire year as a thrower and hone in on his technique.” – Carrie Lane

High School: Was a four-year letterwinner in track & field, football and basketball at Enumclaw (WA) High School… In track & field, had best marks of 14-0 in pole vault, 51.51 in the 400m and 15.06 in the 110m hurdles… Competed in multiple other events as a decathlete during his high school career… Was a WIAA State qualifier in 2018 and 2019, and helped guide his team to a NPSL League Championship in 2019… In football, was named a First-Team All-League defensive back in 2017, and his team won league championships in football in 2017 and 2018… In basketball, his team qualified for state in 2017 and 2018, and he earned Defensive Player of the Year honors in 2018… Was earned the Enumclaw Scholar-Athlete Award in 2016 and 2019, the AP Scholar Award with Distinction in 2018, the EHS Junior Achievement Award in 2018 and was the Academic State Champion in track & field in 2017… Was a member of the National Honor Society.

High School: Competed in track & field for Star Valley High School… as a senior, won the outdoor state title in the 100m and the 200m, losing only four total races during the high school season… Competed at the 2019 New Balance National Outdoor meet, finishing 36th in the 100m… Was also the indoor state champion in the 55m and the 200m… During his junior season, finished third at the state meet in both the 100m and the 200m and was a part of the second-place 4x100m relay team, helping to guide his team to a state title.

Before Wyoming: Competed for one season at the University of Kentucky… During the cross country season, ran at two meets including the SEC Championships, where he placed 81st in the eight kilometer race… During the track & field season, ran at four meets between the indoor and outdoor portions of the calendar.

“He’s had good success in high school and we’re excited about the experience and background Tom brings. He has good speed and in talking to him we think there are some components in training that will compliment is ability well.” – Scott Dahlberg

High School: Competed in track & field for Rock Springs High School… As a senior, won the state title in the 400m, and placed second in the 300m hurdles before teaming to take second in the sprint medley relay… As a junior, earned points at the state meet by being a part of the third-place 4x100m relay team, the fifth-place 4x400m relay team and the third-place sprint medley relay team… As a sophomore, finished fifth at state in the 400m dash before placing second in the 300m hurdles and third in the 4x400m relay.

High School: Competed in track & field at Saratoga High School… Was the outdoor state champion in the high jump as a senior, junior and sophomore… Finished first at state in the long jump and second in triple jump during his senior season… Placed second in the triple jump at state as a junior.

High School: Ran cross country and track & field at San Pasqual High School (CA)… In cross country, was named team MVP as a freshman and junior… In track & field, was named the Boys 2019 Athlete of the Year… Was named team MVP the final three seasons of his high school career… Won the sectional finals of the 800m as a senior, one of 15 race wins during his final high school campaign… Also competed in the 1,600m, 4x400m relay and the distance medley relay.

“Noah had a fantastic senior year and showed an amazing ability to compete. He won 15 of 17 individual races during the outdoor track season in California. He has good range and work ethic which will translate well in his collegiate career.” – Scott Dahlberg