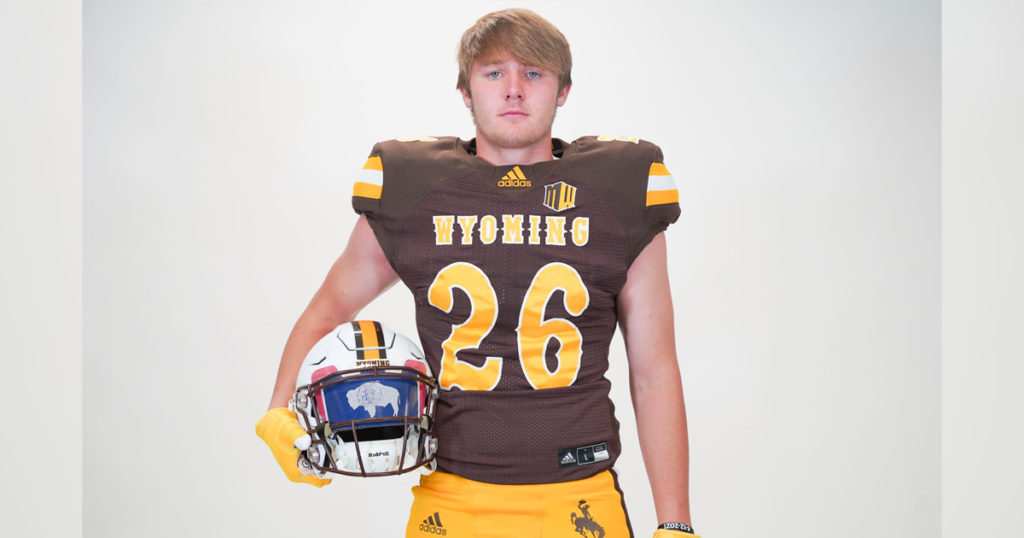 Isaac Schoenfeld remembers attending a University of Wyoming (UW) Cowboy football game as a kid, in which he recalls having a conversation with his dad where he told him that he wanted to play football for the Pokes one day.

That “one day” manifested itself on Monday night, when Schoenfeld called UW Head Coach Craig Bohl and verbally accepted a full-ride scholarship to suit up on Saturdays for the Cowboys.

The 6-foot 5-inch, 225-pound tight end will be a welcomed addition to the Cowboys who plan on using him as a flex tight end who can also serve as a running back and possible fullback. In 2020, Schoenfeld recorded 610 receiving yards, 168 rushing yards and 11 touchdowns on the season, leading the Rock Springs Tigers in scoring. His performance on the field earned him 2020 All-State and All-Conference selections.

Eventually, UW’s Tight Ends and Fullbacks Coach Shannon Moore texted Schoenfeld, which eventually led to a phone call. Moore expressed the team’s interest in him and told him they were considering offering him or another Wyoming kid a scholarship.

Schoenfeld said he and the Pokes set up an unofficial visit on Saturday which was also a workout session where he showcased his skills. He did a vertical jump, 40-yard dash, cone drill, catching drill, and route running.

“Coach Bohl cut it short and it kind of scared me,” Schoenfeld said.

However to Schoenfeld’s surprise, Bohl offered him a full-ride scholarship and told him that he would have a few days to consider their offer. After discussing the offer with his family, it was an easy decision to make.

On Monday Schoenfeld called Coach Moore and let him know he was ready to be a Cowboy. Later that night, he then called Bohl around 9 p.m. and told him he was accepting the offer. According to Schoenfeld, Bohl said he was down in California for recruiting and he told him that he hadn’t seen anyone as good as Schoenfeld.

Shoenfeld said that some of his favorite Pokes he’s looked up to are Josh Allen and the players he played against in Andrew Johnson and Caleb Driskill who he looks forward to playing with now.

“I’m just looking forward to being in that stadium on Saturdays and seeing all the people from Rock Springs in the stands,” Schoenfeld said. “Just the support Rock Springs has shown me so far has been amazing.”

“This is great for kids coming up in the community to see that they can accomplish something like that and that the coaches at Wyoming respect us enough to take a chance on one of our kids,” Lenhardt said.

Schoenfeld is the first D1 football player to come out of Rock Springs since John Wendling in 2001. The 20-year drought ends with a player that Lenhardt believes has a lot of potential moving forward.

“He’s a good fit for the kind of guy Wyoming wants,” Lenhardt said. “I know they are excited and Isaac is only going to get better over time. He has tremendous upside.”

Lenhardt said that Bohl had made the comment that Shoenfeld was “six-five, ran a good 40 and loves to bear hunt, so why wouldn’t they offer him.”

But even more impressive than signing with UW football is the story of Schoenfeld who not too long ago didn’t even know if he liked football all that much, according to Lenhardt. But because he had a little bit of success and started to blossom, that made the difference in the development of Schoenfeld.

“Sometimes we as coaches want to try and label these kids when they are eight, nine, 10 years old and we have no clue what they are going to end up being,” Lenhardt said. “It’s a good lesson for all of us coaches. Isaac was a little bit of a late bloomer, but he developed it and he’s only going to get better.”

Lenhardt said that he’s had three D1 football players he’s coached in Wyoming and Schoenfeld happens to be the one with the most upside.

“He’s going to prepare me for that next level,” Schoenfeld said. “He’s already done so much and he’s going to take that extra step.”

With his senior year ahead of him, Schoenfeld said he is looking forward to playing his senior season with the Tigers who will once again rely upon his offensive talent.

This offseason Schoenfeld has been putting in the work to become a better player all around, which is something Lenhardt has witnessed each and every week.

“Truly, honestly, I can say I’ve seen him get better each and every week,” Lenhardt said.

One aspect of Schoenfeld’s game that he hopes to improve upon is his ability to block.

Lenhardt said the expectations for him will change his senior year as he now has a target on his back and there are more than likely some kids around the state that feel like they are worthy of a scholarship from UW.

“He’s going to have to step up the level of his play even more,” Lenhardt said.

Lenhardt pointed out to Schoenfeld that he can now focus on enjoying his senior year knowing his future is set and his decision is made, which is a big advantage not many senior athletes get to have.

“This couldn’t have happened to a better kid,” Lenhardt said.