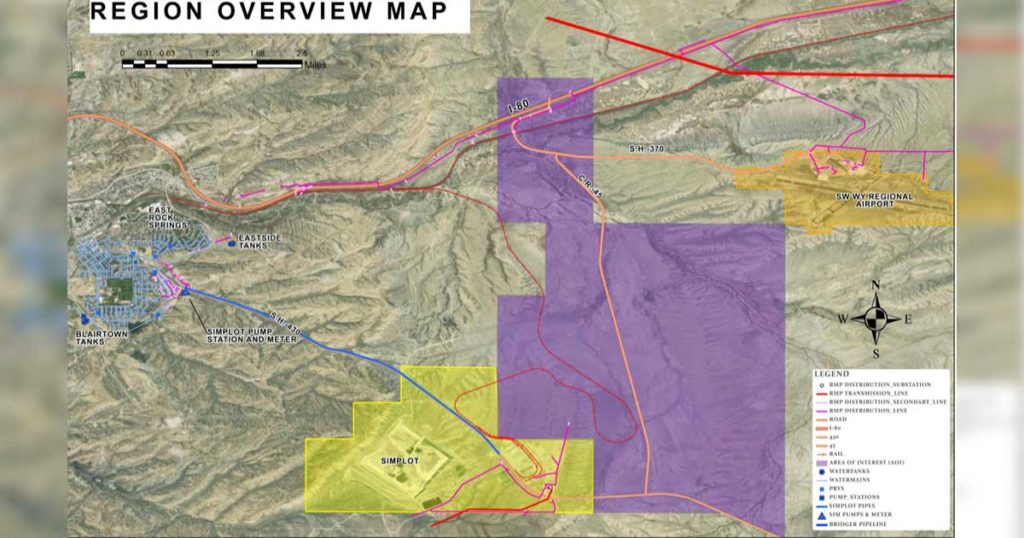 SEDC is a joint effort with the cities of Green River, Rock Springs and Sweetwater County.  The development project is being put together by William H. Smith and Associates and Thomas P. Miller and Associates through a grant that was awarded from the Wyoming Business Council in March of last year.  Sweetwater County has been following through on the analysis of development of thousands of acres near the airport along Middle Baxter Road.

Currently, it is researching the costs of infrastructure and the types of markets it wants to attract, going hand-in-hand with businesses that complement the coal and trona industries of the county.

Phase one of the project was presented earlier, which focused on the types of industry which could locate at Middle Baxter. Earlier this year, an Economic and Workforce Targeted Industries Analysis was done, which highlights different types of industry that could come to Sweetwater County and be part of the industrial complex.

The analysis pointed out a high demand for industries including computer services, electronic and catalog shopping and warehousing, metal processing, and agriculture and construction machinery.

The land in question is owned by the BLM and the Rock Springs Grazing Association and includes 13 parcels.  The board and advisors agreed to focus on two parcels on the southern end of the identified area just east of Simplot.  As the development takes off, infrastructure development could move further north towards I-80.

Water, power and natural gas infrastructure were the main focus of phase 2.  The group was informed that the largest challenge for industrial development in the area will be water.  It was suggested that a 2-2.5-million-gallon storage tank and an 8 to 12-inch water pipe will have to be installed to service the area and they discussed opportunities, costs, and possible phasing to get that started.

“In the current proposed plan, the new industrial park would connect with the existing water system that serves Rock Springs. This means that the water would be diverted from the Green River,” Sweetwater County Economic Development Specialist Kayla McDonald said.

The next step in the process includes pursuing partnerships with companies in the target industries, which will lead to a more precise and specific list of infrastructure needs.

Phase 3 of the project will be where a plan will be determined and implemented. During the third phase is when SEDC will make the decision on what industry to look to recruit.

“There is a possibility of a Phase 4 which would be hiring a site selector to help us with the recruitment process,” McDonald said.

Sweetwater County and the two cities, through SEDC, have taken the state’s ENDOW (Economically Needed Diversity Options for Wyoming) initiatives and mission and focused it to their own needs.  The size and foresight of the project stands to increase the area’s economy greatly.

SEDC has their offices in the county’s Land Use Department.  Kayla McDonald is the Economic Development Specialist and the board consists of Devon Brubaker, Reed Clevenger, Lauren Schoenfeld, Tim Kaumo, and Marty Carollo.  Advisors include Doc Wendling, Pete Rust, Kim Dale, Jenissa Meredith and ex-officio board member Eric Bingham.