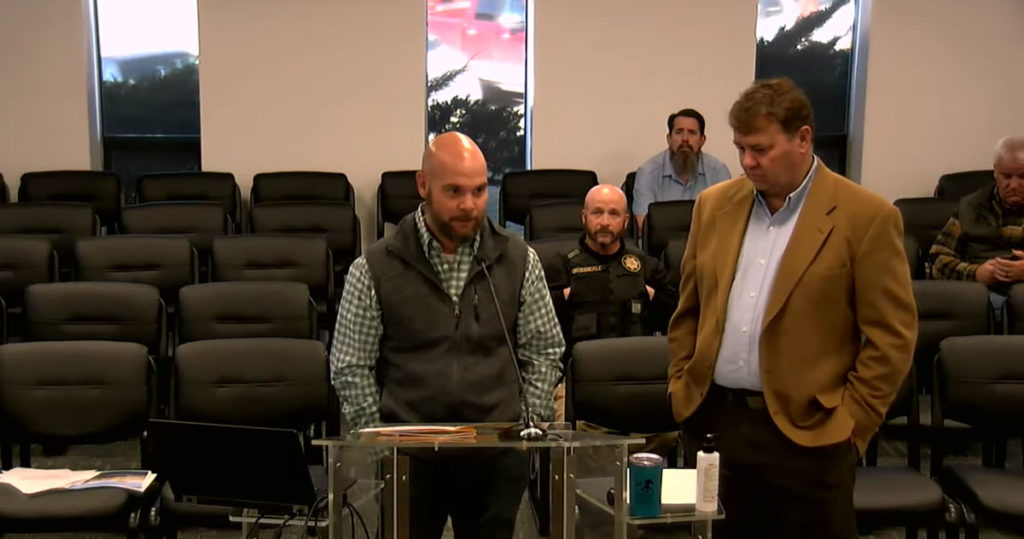 Amendments will be made to his job title that will make him available to the County Commission and other county departments to assist in both public and internal communications, as well as monitoring social media channels and other media outlets.

Sheriff John Grossnickle said that Mower has done a great job for the Sheriff’s Office and will do the same for the county.

“It is a vital role and he should do great in that,” Sheriff Grossnickle said. “Jason is a commodity to the Sheriff’s Office and he’ll be the same for the county.”

“I’ve been doing this for four years now under Sheriff Grossnickle’s leadership. It was something that I was reluctant to do because I was more of the high speed, low drag law enforcement officer for the first eight or nine years of my career. But it’s something that I’ve really come to embrace and as the Sheriff said, in this day and age, it’s a role that is critically important,” Mower said.

Commissioner Roy Lloyd said he believes having Mower fill this position is a benefit because he already has contacts in the county, and he has a Masters degree in politics. Mower also pointed to his education as a benefit to him filling this role.

“Part of why I’ve become good at this is because I keep my ear to the ground and I network with a lot of people, and I try to use my 15 years experience in law enforcement, my graduate education in politics, and more often than not, I try to head things off before they become an issue,” Mower said.

Another benefit to having Mower take on this additional role is that he already has a county salary. This means even though his salary will increase to compensate for the extra responsibilities, the county does not have to pay an additional salary.

However, both Lloyd and Mower pointed out that a negative to Mower taking on this job is that he has an entirely separate job for the Sheriff’s Office. Lloyd expressed concerns about Mower becoming over boarded with tasks for the county that take over his time for his Sheriff’s Office duties. Mower is also a law enforcement officer who has several responsibilities to maintain his training and his position.

“When I read the public relations director position job description as presented and proposal to amend my existing job description, it is exactly what I envision as a role of a county-wide, full-time public relations director who’s not also a law enforcement officer with additional duties. That’s part of my concern, and I think we can work through it, but as you mentioned, if it starts to take off and be successful and the county sees value in it and now I have the phone ringing 30 times a day… well, that was one of the concerns I had as presented. I work for the Sheriff right now, and that’s always going to take precedent,” Mower said.

Commissioner Lauren Schoenfeld said the Commission has been talking about a position like this for years, and that this a good step “to see where it goes and see how big the need actually is”.

She also suggested they follow up on how things are going with Mower in February.

Sweetwater County Human Resource Director Gary McLean said it will be the county’s responsibility to funnel critical information to Mower.

“It’s not just handing it over and going ‘you’re on your own’, it’s incumbent upon all of us to really work on that level of coordination,” McLean said.

The Commission voted 5-0 to approve the job description and the salary increase for Mower, and they will follow up with him in February. Mower’s position with the county is effective immediately. Mower will receive a 10 percent pay increase, bringing his salary from about $69,500 to $76,400.