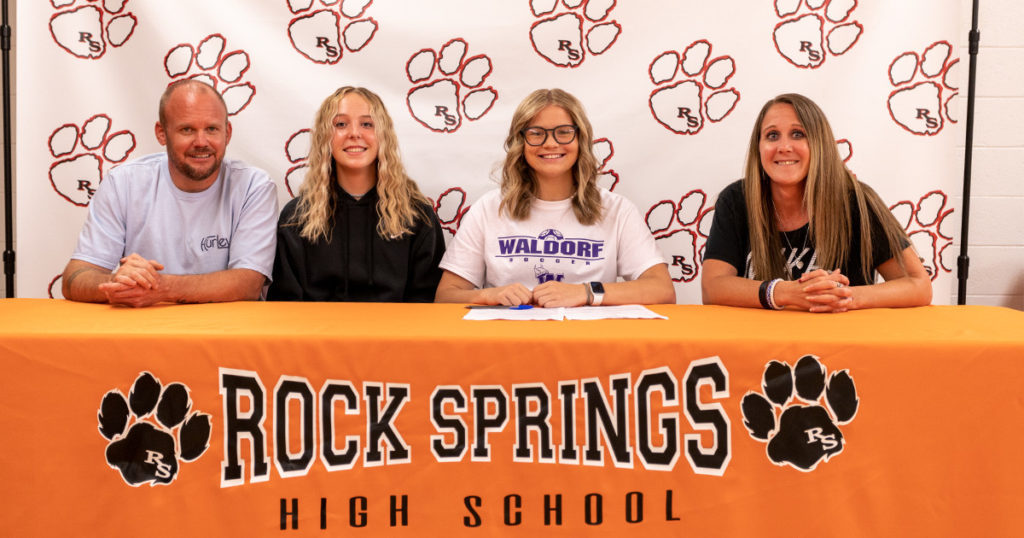 Zoe Silovich will be trading out the orange and black for purple and black as she continues her soccer career with the Waldorf Warriors.

Silovich signed her national letter of intent to play for Waldorf University, a four-year school which competes in the NAIA division of collegiate sports. She was joined by her family and coaches on Wednesday evening to celebrate her decision.

The Rock Springs High School (RSHS) soccer player was awarded All-State and All-Conference honors this year for her efforts on the field this year after helping fuel a successful state championship title run.

Initially, Silovich said that she wasn’t planning on playing soccer after high school because she wanted to focus on school. She had a family member who was a college athlete and remembered how they told her how difficult it was to balance school and athletics.

However, the temptation to play at the next level presented itself during the 4A state soccer tournament. Silovich said that she was encouraged by her head coach Stephen Pyer to look into Waldorf after they gave her a card with some contact information.

After winning the state title, Silovich listened to Pyer’s advice and did her due diligence about Waldorf’s program. She then texted the coach who told her that she was still on their wish list and there was a spot readily available for her. A few weeks went by and she went back and forth on what to do with her future, but ultimately, the All-State outside back chose to continue playing the sport she’s always loved.

“I decided that it was right for me so I committed verbally two weeks ago,” Silovich said.

Silovich will team up with the Warriors, where she will seek to earn a starting spot on the roster.

“I’m really working hard to play. I do think I have an advantage since I’m left-footed,” Silovich said.

Her favorite memory while with the Lady Tigers is winning the state title this season. Not only did she get to win it with the same group of girls she’s played soccer with since she was eight, but she was part of a historic season that will be etched in RSHS history.

Although it wasn’t an easy decision to make, Silovich reassured that it’s the perfect fit for her, even if it is 15 hours away from home. She will be studying to become a physical education teacher.