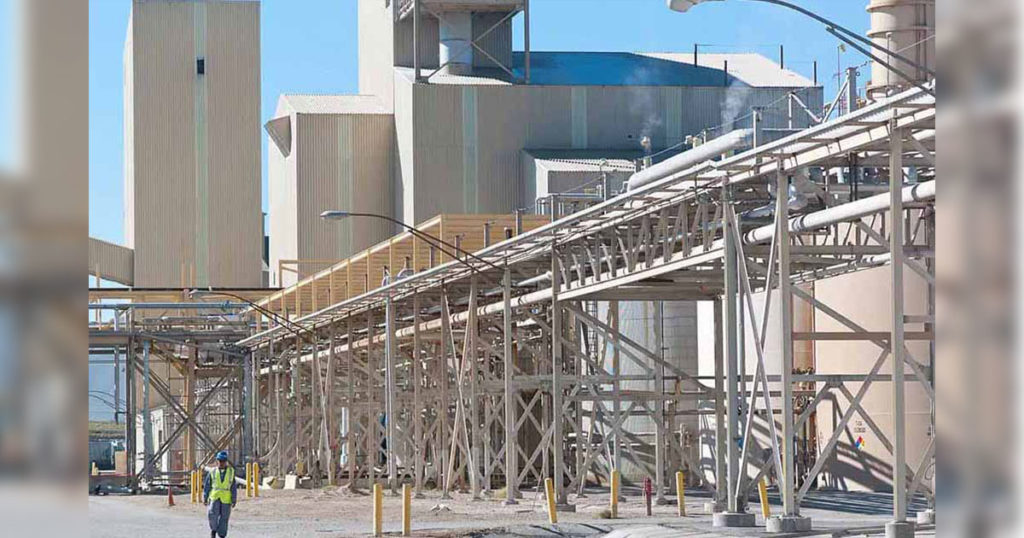 A worker at the Simplot plant outside Rock Springs in 2014. (Angus M. Thuermer, Jr./WyoFile)

The giant Boise-based agribusiness J.R. Simplot Company has agreed to pay $775,000 to resolve allegations it violated federal waste and community-protection laws at its phosphoric acid and fertilizer plant outside Rock Springs.

Simplot representatives signed a consent decree with the U.S. Department of Justice on July 9 in which they agreed to pay injunctive relief and civil penalties to resolve a suit brought by the federal agency.

Simplot “illegally placed” hazardous material in a waste pile of calcium sulfate byproducts known as a phosphogypsum stack system, the government claims. At Simplot’s Rock Springs facility, that pile has grown to cover 420 acres and is about 200 feet high, according to the consent documents.

Simplot also failed to properly categorize the hazardous wastes in reports, the government claims. The company disputes both allegations and denied various other government claims, according to the agreement. But it will pay the penalties and relief nevertheless.

“For the purpose of avoiding litigation among the Parties … Simplot agrees to the requirements of this Consent Decree,” the document reads.

Simplot will undertake four major actions, including conducting “compliance projects” and instituting waste-management protocols. The company also will plan for eventual closure and long-term monitoring of the Rock Springs facility. It will monitor groundwater for possible corrective action “to address any … contamination,” an announcement in the Federal Register reads.

If approved by a judge the agreement with Simplot and its subsidiary Simplot Phosphates LLC would take effect sometime after Aug. 15, the deadline for a 30-day public comment period.

“We’re pleased to have reached this proposed settlement and look forward to our continued partnerships in Rock Springs and [with] the customers and communities that our work supports,” the company said in a statement Monday.

“While the Company disagrees with the allegations, this proposed settlement helps ensure the future viability of our phosphate efforts and shows our commitment to long-term land reclamation and environmental stewardship,” the company’s statement reads.

The private company does about $6 billion a year worldwide in business, spokesman Josh Jordan told WyoFile. It employs about 13,000 people. It is a major employer in Rock Springs, population about 22,200, where its industrial fertilizer and ammonia plants and the phosphogypsum stack sprawl across part of the 2,720-acre Simplot property about five miles southeast of the city.

Simplot Phosphates facilities, including a phosphate mine in Vernal, Utah, spend $57 million annually in Vernal and Rock Springs, the company says. That includes  $1.7 million each year in municipal taxes, and $38.3 million through employee salaries, according to a company web page.

Hundreds of pages of documents make up the agreement between Simplot and the DOJ. Attachments to the agreement include technical diagrams, a groundwater monitoring plan, a civil complaint, cost estimates to close the facility site and the 194-page consent decree itself.

In that decree, Simplot pledged to change its operating practices regarding hazardous waste, implement environmental controls, provide financial assurances it could accomplish a $126-million closure plan and pay a civil penalty.

“Our Rock Springs facility is an important part of our fertilizer manufacturing efforts and we have and continue to make ongoing updates and improvements to the site knowing that we have years remaining in our operations there,” the company’s statement reads. “We have no plans related to [a] timeline for the facility; it is in great shape, has a stable ore supply and continues to be a big part of our long-term plan. We are committed to ensuring appropriate closure, maintenance and long-term stewardship of the plant.”

Manufacturing of fertilizer products begins in Utah where phosphates are mined, mixed with water and pumped via pipeline to the Rock Springs plant. Near Rock Springs, the subsidiary Simplot Phosphates LLC makes phosphoric acid, superphosphoric acid and dry granulated fertilizers, among other things.

Chevron Resources Company built the Rock Springs Facility in 1986. Simplot bought into the operation in 1992 and operated it as Simplot Phosphates starting in 2003, according to the documents.

Simply put, Simplot makes fertilizer by mixing sulfuric acid and phosphate rock. That generates the fertilizer ingredients and phosphogypsum, a waste that it stores in a pile outside the plant amid a series of settling ponds.

Phosphogypsum contains gypsum, a material commonly used in drywall. But the federal government banned phosphogypsum use in 1989 because it emits low-level radioactivity. Phosphogypsum is dumped and stored in increasingly large piles across the country but itself is not categorized as a hazardous waste.

The fertilizer manufacturing process also produces hazardous wastes that federal regulations characterize as chromium, corrosive materials and arsenic, among other elements. The water-intensive process produces 11,000 gallons a minute of aqueous wastes, according to the agreement documents. Between 120 million and 170 million gallons of processed wastewater circulate through the phosphogypsum stack system.

The EPA inspected the Rock Springs site in 2007 and in 2009 issued a notice of violation, according to a complaint filed with the agreement package. It inspected the site again in 2014 and 2017.

In recent years, the company has collected hazardous materials and disposed of them correctly, according to the documents. But before that, the company didn’t determine if wastes it was discarding — including various cleaning products, spills, leaks and other substances that were sent on to the phosphogypsum stack — were hazardous, the government states.

From at least 2004-2006, and likely through 2013, the company processed or used more than 25,000 pounds of arsenic, barium, chromium, nickel, selenium, vanadium, zinc and copper compounds, and hydrogen fluoride, the documents say. That apparently exceeds the level at which the company was required to report the substances. The allegations say the company violated not only federal law, but Wyoming regulations based on those federal standards.

Simplot and federal enforcers agreed the company will submit reports within 60 days of the completion of the agreement that will detail information missing from 2004-2013. Those reports will “incorporate reasonable estimates of the quantities of hazardous substances manufactured, processed, and/or released at the Facility,” during those years, years when the EPA alleges the company did not submit reports as required.

In 2016 Simplot undertook a groundwater investigation, according to the documents, and the EPA found no corrective action work was required. The company will institute groundwater monitoring, will notify the EPA if it finds any exceedance of Wyoming groundwater standards and perform corrective work if required, the documents state.

The agreement includes a provision that regulators, or contractors, would take over required work using the company’s financial assurances if Simplot does not perform the agreed-to work.

In 2014 Simplot received permission to expand its Rock Springs operations to include a $350 million ammonia plant. At a hearing before the Wyoming Industrial Siting Council, the company couldn’t say what hazardous wastes were going to be generated from that addition or what the company was ultimately going to do with them.

“We do have heavy metal,” one company representative said of known hazardous materials. But how much, representatives could not say.

“We could get guesses,” a Simplot representative told the siting council about hazardous materials.

“We’re well versed with dealing with them,” company representatives said. “There is no impairment,” to residents’ health.

The siting council approved the construction with one member abstaining for lack of information.

This article was originally published by WyoFile and is republished here with permission. WyoFile is an independent nonprofit news organization focused on Wyoming people, places and policy.