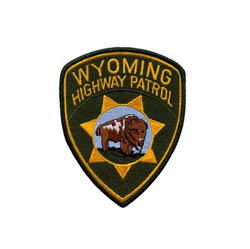 ROCK SPRINGS – Occasionally, even law enforcement becomes the victim of impaired driving. This was the case early Sunday morning shortly after 1:00 a.m. as a Trooper sat in his patrol car on the shoulder of Interstate 80 working a previous crash.

The incident occurred approximately 3 miles west of Rock Springs on the eastbound side.

The Trooper’s parked vehicle had the emergency lights activated when he noticed a vehicle approaching from behind and encroaching towards his vehicle. The Trooper was able to move his vehicle slightly before the right rear of his patrol vehicle was struck.

The driver of the other vehicle did not stop and continued down the Interstate. The Trooper was able to catch up to and stop the hit and run vehicle.

The driver, 21 year-old William Lewis from Rock Springs, was arrested and has been charged with alleged driving while under the influence, leaving the scene of a crash, failure to maintain a single lane of travel and failing to move over for an emergency vehicle.

The Trooper was not injured, however his patrol vehicle sustained approximately $2,000.00 in damage.

The Wyoming Highway Patrol would like to remind drivers that Wyoming’s “Move Over” law is there to be a measure of safety for emergency workers.