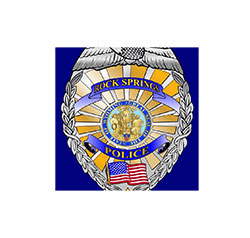 ROCK SPRINGS — On Friday, April 18, 2014, Chief Mike Lowell of the Rock Springs police department reported that Derik James Von Schriltz, age 25, of Rock Springs was arrested during a hit and run investigation that was later found to involve a stolen vehicle.

At approximately 8:26 p.m. a witness reported a hit and run crash involving a truck striking a pole near the intersection of Ridge and Elk Street. The vehicle was later identified as a brown 1976 Ford. The witness reported a suspect fled from the scene on foot in the direction of Joe’s Liquor nearby. Police observed the suspect in the area but lost sight of him prior to being able to make contact.

Sergeant Jubal Larimore located a man hiding behind a bush with a cut to his forehead behind Joe’s Liquor. The suspect was later identified as Schriltz. Police reported that Schriltz was placed under arrest for being drunk in public.

Shortly following the reported hit and run and police finding the suspect, a woman called to report her truck had been stolen from in front of the Sands Inn Motel on 9th Street. Police were able to determine the vehicle involved in the hit and run had just been stolen after the owner had left the keys under the front seat and left it unattended. Police are reminding the public not to leave keys in their vehicles to avoid similar issues.

Police located blood near the wrecked truck which will be sent to the Wyoming State Crime Lab for testing. The investigation into the crashed stolen vehicle is ongoing and will be forwarded to the Sweetwater County Attorney for review of charges once complete.

Sergeant Larimore noted a successful case depends on a team effort involving several officers. Larimore advised officers were involved in different aspects of the case such as investigating the crash, collecting evidence, transportation of the prisoner and several other tasks.

The Chief would also like to thank the witness in this case for reporting the crash and ultimately helping officers catch the suspect by quickly reporting the incident to police. Chief Lowell notes that citizens are an important part to crime prevention and apprehension by being the eyes and ears of law enforcement.

Police would like to remind the public that all persons are considered innocent until proven guilty in a court of law.

-FROM AN RSPD PRESS RELEASE