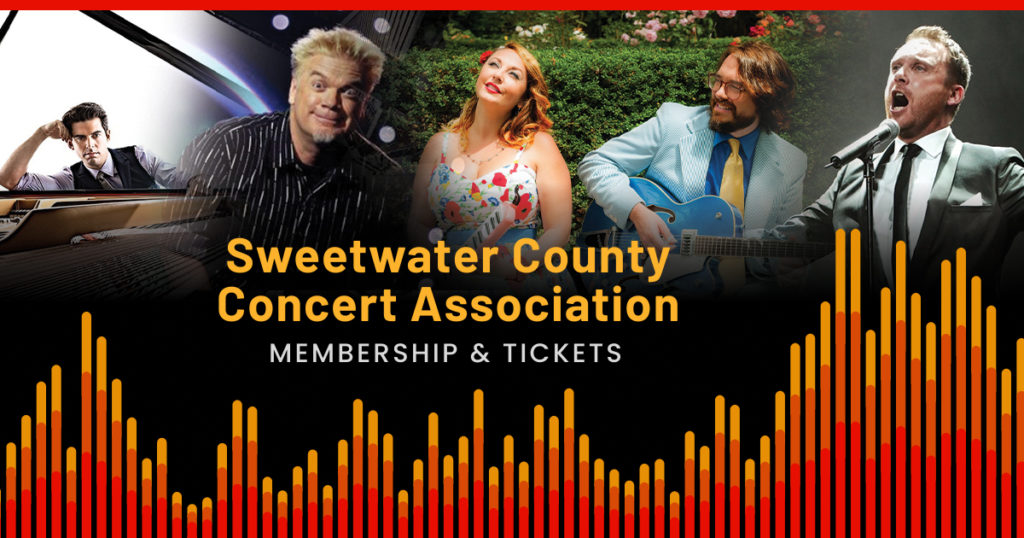 The Sweetwater County Concert Association announces the concert series for the 2021-22 season.

They are currently holding their annual membership campaign.

The Sweetwater County Concert Association is a local non-profit group whose mission is to bring the best in live professional entertainment to the residents of Sweetwater County at the lowest cost possible. SCCA offers guaranteed seats for the four concert series to members of the Association for one low membership fee. Because of this, county residents have the opportunity to experience these family-friendly performances at local venues without the added cost and inconvenience of long drives or over-night stays. SCCA memberships are completely transferable.

Members of the Association also enjoy reciprocity with the Cheyenne and Craig, Colorado Concert
Associations. This means that SCCA members are able to attend the concerts presented by these
Associations as part of their local membership fee, thus tripling the number of performances available.
The Sweetwater County Concert Association sponsors a local scholarship program that provides music-
related needs, such as instrument rental or repair, purchase of concert attire, etc., for local students.
SCCA also promotes music education by working with Sweetwater BOCES to provide student matinees
and Master Classes whenever possible.

Individual concert tickets are $20 for Adult, $15 for Senior and $10 for Student

Information on the concerts and membership fees has been mailed to previous members and is
available at the Rock Springs and Green River Chambers of Commerce. Season memberships and
individual concert tickets are available at the door the night of the first concert as well as online at
HERE.

The Sweetwater County Concert Association has four concerts slated for the 2021-2022 season. The
first concert will feature David Shannon and is set for Thursday, October 21st at the WWCC Theater.
David Shannon grew up in Ireland and has been singing professionally for more than 25 years. He has
graced the stage for SCCA previously as the Broadway half of the Irish duo Fir in the 2016-17 season.
David has played some of Broadway’s most famous roles, including The Phantom (Phantom of the
Opera), Jean Valjean (Les Miserables), Sweeney Todd (Sweeney Todd), Judas (Jesus Christ Superstar),
Chris (Miss Saigon), and most recently Kevin T in the original London company of Come From Away. He
was nominated for Best Actor at the Olivier’s (the British version of the Tony Award) for Andrew Lloyd
Webber’s The Beautiful Game. David also enjoys a busy schedule performing with orchestras around the
world.

The next concert in the series is scheduled for Monday, November 22 nd at the Green River High School
auditorium and will showcase pianist/singer Tony DeSare in a trio with guitar and bass in their show “I
Love a Piano”. Tony has three top-ten Billboard jazz albums under his belt and has been named a
“Rising Star Male Vocalist” by Downbeat Magazine. Tony has headlined Carnegie Hall, many jazz clubs,
Prairie Home Companion and symphony orchestras including those in Milwaukee, Seattle, Indianapolis,
Grand Rapids, Baltimore and the Smith center in Las Vegas. He not only won the USA Songwriting Contest, but has written the theme for the movie “My Date with Drew”, several broadcast commercials
and has composed the full soundtracks for movies for the Hallmark Channel and Lifetime. His sound is
romantic, swinging and sensual, but what sets DeSare apart is his ability to write original material that
sounds fresh and contemporary, yet pays homage to the Great American Songbook. His compositions
include a wide-range of romantic, funny, and soulful sounds that can be found on his top-selling
recordings.

The next concert is set for Friday, March 25, 2022 at the Broadway Theater and will showcase award-
winning comedian and magician Chipper Lowell in a family-friendly show for all ages. The son of two
Ringling Brothers circus performers, Chipper has shared the stage with Jerry Seinfeld, Dana Carvey, Tom
Bergeron and Terry Fator. The Chipper Experience is a high-energy blend of hilarious comedy, original
magic, jaw-dropping mentalism, dangerous juggling stunts and surprises galore, ad-libs and
improvisations. For over 20 years, Chipper has brought his odd brand of mayhem to audiences
throughout the United States, Canada, England, Australia, New Zealand, Malaysia, and Mexico.

The final concert of the SCCA season will feature husband and wife duo Sundae and Mr. Goessl on
Sunday, April 24, 2022 at the Broadway Theater. This duo puts on a vintage inspired show that blends
blues, swing, country and Latin sounds. Performing hits from the roaring 20’s to modern classics and
originals, Sundae and Mr. Goessl utilize technique, technology and unique instrumentation to give this
little band it’s big band sound. Mr. Goessl’s mesmerizing finger-style guitar dazzles and inspires while
Sundae’s sultry vocal interpretations drip with charm and nostalgia. The celebrated newly-wed couple
has been providing entertainment to music-lovers since 2014, including performing previously in
downtown Rock Springs as part of the “brown bag” summer concert series. This busy duo has done 5
albums, 8 national tours, 2 sponsorships and over 700 shows.

There’s Just Something About October