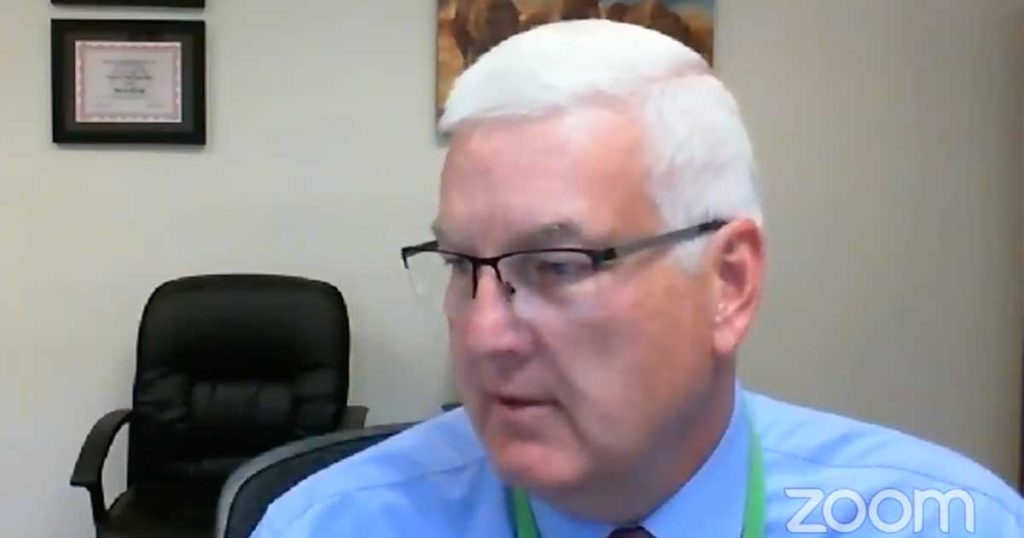 According to his estimates, Sweetwater County should prepare for about a $6 million decrease in property tax valuation to go toward the 12 mill, which funds the core county government as well as all the county’s component units.

When starting his presentation, he reminded the commissioners that “estimates are just that; estimates”, and he is going off of six months of data for his estimate valuations.

The Wyoming Department of Revenue’s Mineral Tax Division provides the mineral severance tax information to the county assessors, and those values are used for the estimates, Divis explained.

The timeline for tax valuations works out so that there is a three-month delay between the mineral production and when the tax bills are sent out. This means Divis is working off of the values from January to June 2020 to make estimates for the remainder of the year. In January, Divis will receive the numbers for July through September, and this will allow him to make more accurate estimates.

When determining the estimates for the rest of 2020, Divis took the values for the first six months of the year and multiplied them by two. He also said he took a 20 percent reduction for “locally assessed” properties, which includes homes and industrial sites.

He said it is important to note he is not saying the housing market is down 20 percent, but is rather doing the reduction to account for struggling industrial sites amid the COVID-19 Coronavirus pandemic.

“COVID was a major factor in their production and capability,” Divis said of local industrial sites.

Divis hopes the 20 percent reduction in locally assessed properties will be a conservative reduction, and that the actual values will come back better than that.

“Plan for the worst, hope for the best,” Divis said.

However, though trying to remain optimistic, Divis said in just six years, valuation has decreased by $1 billion.

“That’s a significant number,” he said. “When the minerals go down, the values go down with it.”

Though gas valuation was “off the charts” in 2015, according to Divis, it took a big drop in 2016 and has yet to recover. However, what stands out to Divis as a major concern in the decrease in trona, which up until recent valuations was “untouchable”.

In the past years, trona production by itself garnered a valuation of $500 million. This year’s valuation is down to $380 million. He said in discussions with trona industry leaders early on in the COVID-19 pandemic, they were reporting that it would take six to eight quarters for them to recover in production.

This is a concern, because the majority of the county’s total valuation comes specifically from mineral valuation.

The revenue breakdown for the 2021 budget general fund shows that of the $35 million that comes from revenue, $20.5 million comes from property taxes. Divis said, however, those dollars are just “numbers on paper”.

“I’m very concerned with bankruptcies that are coming from these [industry] companies. I don’t know that every dollar bill is going to be collected,” Divis said.

Effect on the Budget

In tax year 2020, the county had a valuation of $2.3 billion, which when multiplied by the 12 mills, came out to be $28 million that was able to be allocated to the general fund and the county’s component units.

The current estimates for tax year 2021, with six months of data, shows a valuation of $1.8 billion, allowing $22 million to fund the county’s general fund and component units.

Divis added he does not expect these tax valuations to have a quick turn around. He said if the valuations stay even from 2021 to the next year, he would consider that “a win”.

“I’m not expecting a quick turn around by any means,” Divis said. “We’re going to be in this mode, this valuation, this budget cycle, these conditions, I think, for at least two to three years.”

The commissioners agreed they do not expect the valuations to improve quickly, and therefore need to be proactive when drafting the budget this coming year.

“As a board, we really have our work cut out for us,” Commissioner Roy Lloyd said.

Lloyd suggested the commissioners look at ways they can be more efficient, look to form partnerships, and explore all avenues throughout the budget process. Chairman Randy “Doc” Wendling agreed, saying everyone will have to prioritize costs to absolute necessities for operations.

“Ride for the brand,” Wendling said. “And the brand is Sweetwater County.”