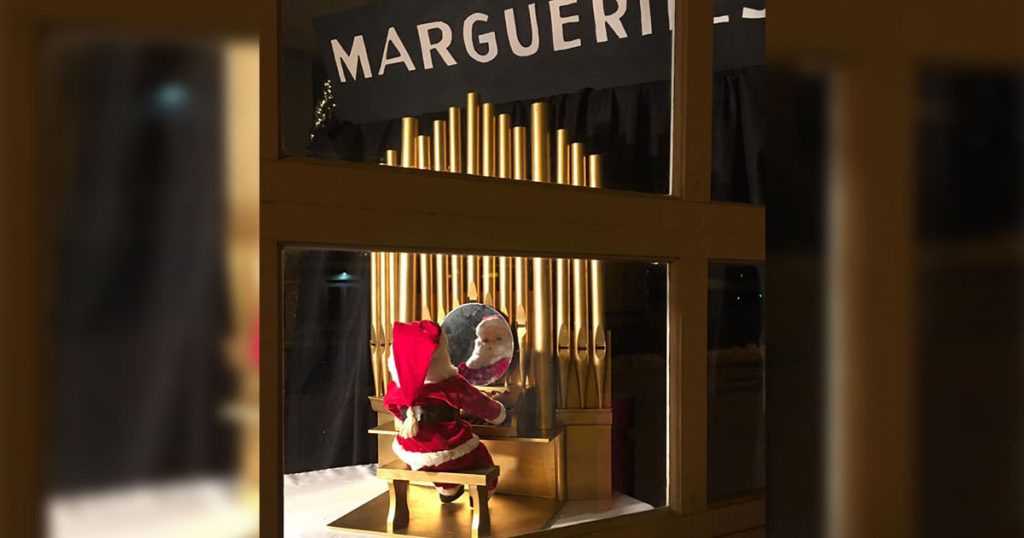 ROCK SPRINGS– The Rock Springs Historical Museum staff has put the Marguerite Santa on display for the Holidays in his traditional spot in front of the firehouse doors.

Viewers can stop and watch the small mechanical Santa play Christmas music on the pipe organ just like he did at Marguerite’s Gift Shop years ago.

The Marguerite Santa has been fascinating children and adults since he was first put on display in Marguerite Parker Galicich’s North Front Street Gift Shop window in 1946 or 1947.

Stories differ whether Marguerite’s husband, Albert Galicich, bought the Santa in New York while on leave during the Second World War, or if it was purchased in Denver after he returned home.

Either way, for thirty years, until Christmas 1977, children lingered at Marguerite’s to see the little velvet clad Santa whenever they were downtown.

“I Could Have Spent the Entire Month of December Watching Him”

Rock Springs native Barbara J. Bertagnolli wrote in her book “Years Ago: Scenes and Stories from Rock Springs, Wyoming” that:

“Marguerite’s was snazzy. Beginning with the flashy black and white tile exterior and delightful window displays of chic, classy gifts, Marguerite’s was the place to go…During the Christmas season Marguerite’s front window displayed a pint-sized mechanical Santa seated at a nifty little pipe organ playing Christmas songs…To say I was completely absorbed by Marguerite’s little Santa is a bit of an understatement. I could have spent the entire month of December watching him.”

After the Closing of Marguerite’s Gift Shop

It was a sad day when Marguerite’s Gift Shop closed in the spring of 1978 and the Santa went into storage.

He reappeared in 1980 in Carmen Berta’s antique shop here in town for a brief encore before moving to Hurricane, Utah. Mrs. Berta, her husband Rusty, daughter Wendy and son in law Bob Sines took care of the Santa in his new home for many years.

In 1994 that the Marguerite Santa made a one season only return visit to the Rock Springs Historical Museum before retiring back into Berta’s care.

Finally, in 2007 the Santa was returned to Rock Springs, where he makes his home at the Museum, an appearances every year in December to the delight young and old alike!

The Marguerite Santa will play nightly, from 6:30 to 7:30 pm at the Rock Springs Historical Museum through the night of January 6th.