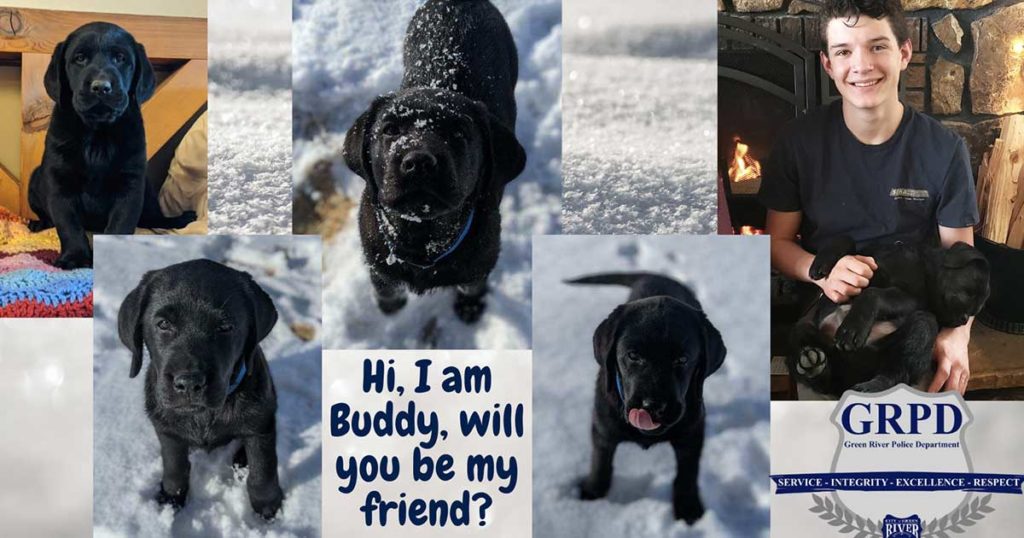 The Green River City Council will vote to approve the purchase and training of Buddy. Photo courtesy of GRPD

GRPD Juvenile Detective Martha Holzgrafe identified programs in other states that utilize a therapy canine to assists victims during interviews and later court testimony and decided she wanted to initiate a program here in Green River. This therapy K9 program will be the first program in Wyoming.

Ninety percent of Detective Holzgrafe’s caseload involves kids who are either a victim, witness, or suspect to a crime, she said. When interviewing children, the kids disclose traumatic events. Nationwide, therapy K9s have been increasingly used during these forensic interviews.

In addition to helping kids during forensic interviews, the therapy K9 can also be used for children with special needs in schools. Children can be triggered by crisis, and Holzgrafe said the therapy K9 can assist in calming the kids down by reducing internal struggles, and allow the staff to implement coping skills and return the student to their learning environment.

K9 therapy can also be used in courtrooms where the dog can assist in calming witnesses down as they prepare to provide testimonies. Holzgrafe said 26 states used therapy K9s in courtrooms in 2015.

Additionally, therapy K9s can assist in domestic violence calls by calming the victim down as they await the advocate’s arrival.

Lastly, Holzgrafe said therapy K9s can be used to benefit the mental health of police officers as well. According to Holzgrafe, the suicide rate for law enforcement is 60 percent higher than those not involved in law enforcement. She said the therapy dog will attend the police department’s debriefs to help the officers decompress after stressful and wearing calls.

GRPD’s therapy dog is Buddy, an 11-week-old black lab puppy. Buddy was born on November 13, 2020 and will be conducting his training with Duty Dogs for about three months. GRPD said they may be expecting Buddy to arrive in Green River in May.

Detective Holzgrafe will travel to Cody to visit and work with Buddy during his training. After Buddy arrives at the GRPD he will continue to work with Holzgrafe in his training. Once Buddy reaches a year old he will then travel to Cheyenne and complete his certification as a therapy service dog.

Councilman Mike Shutran thanked Holzgrafe for “thinking outside of the box” to address mental health issues in the community.

Mayor Pete Rust said after substituting in the school district, you see the kinds of situations children face, and he believes these dogs will be great for those groups of kids.

“Any help that they can get is a blessing so I’m really encouraged you guys are doing this,” Rust told Holzgrafe.

As for a fiscal impact on the city, the grant could offset some or all of the $7,000 cost anticipated in starting the program. However, having a program, will result in ongoing costs to care for the animal.

Buddy will live with Hozlgrafe, as she will be the handler, and will come to work with her every day.

The Council unanimously made the following appointments and reappointments Tuesday night: