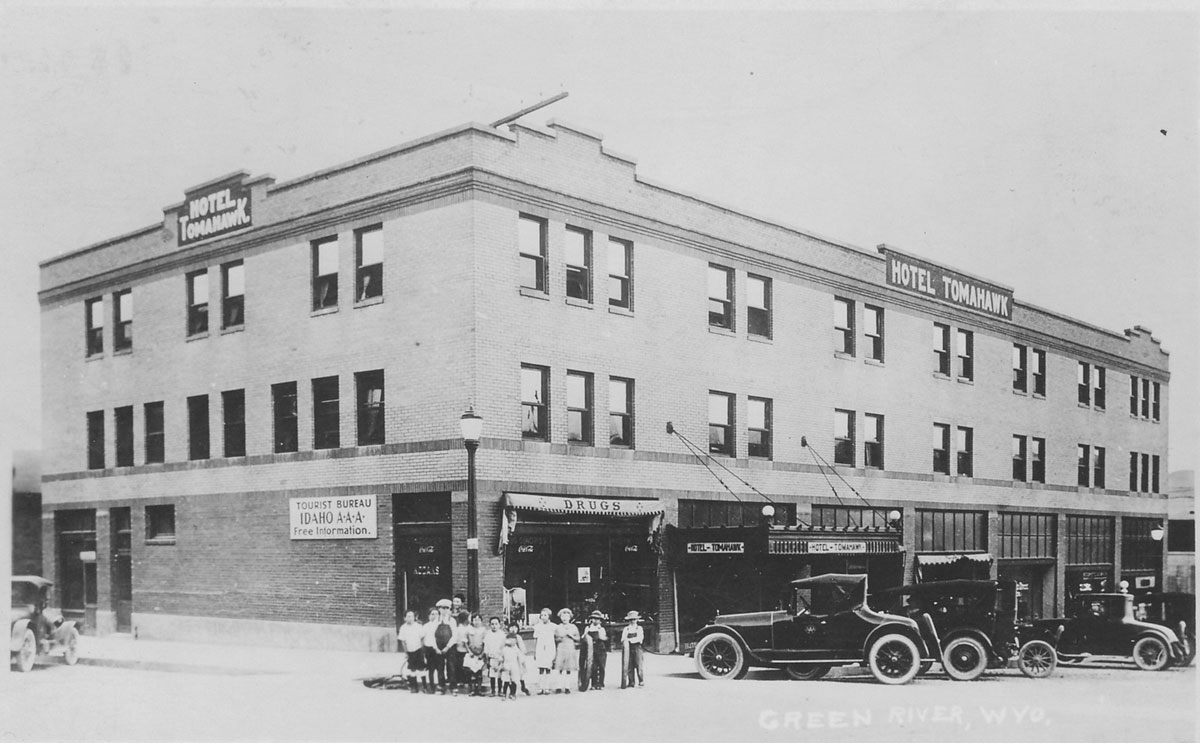 The Tomahawk Hotel when it first opened in 1921. Photo contributed by Sweetwater County Historical Museum

GREEN RIVER– The Tomahawk Hotel in downtown Green River is currently undergoing restoration as office space and apartments, which will enable this important piece of local history to remain in place for decades to come.

Adaptability is the key to continued existence.

Older residents may remember that the Tomahawk Hotel was a centerpiece of hospitality and a model for other hotels in the early- to mid-20th century. Construction on the Tomahawk began in 1919, with the hotel opening for business in 1921.

The Tomahawk Hotel was constructed to last: the builders constructed the hotel with 18-inch thick walls with steel beams wrapped in concrete. The Tomahawk remained in operation as a hotel until the early 1980s, when time and legal requirements passed it by.

Among other issues, the Tomahawk Hotel could not meet the access requirements of the Americans with Disabilities (ADA) Act for the second and third floors, according to Mike Frink, now with Sweetwater Trophies in Green River and formerly with Green River Futures (GRF), an economic development agency.

The GRF was the former owner of the Tomahawk Hotel. Asbestos and lead paint problems also needed to be addressed, and since have been.

Be the ADA issue as it may, the Tomahawk was upscale for its time. Some of the rooms had their own bathtubs.

“That was unique for that era,” Frink said, although most of the rooms had no bathroom and required occupants to share a common restroom.

Interestingly, according to the Library of Congress, the Hotel Tomahawk (as it was first called) was not named for the Native American weapon, but was a combination of the names of the first three owners: Mr.& Mrs. Thomas Welch and Dr. J.W. Hawk.

The Tomahawk was built and located for guaranteed success.

“It was right by the Lincoln Highway, facing the Union Pacific Railroad,” Frink said.

Guests expected, and got, luxury after sometimes challenging trips to get to Green River.

One story, Frink remembered, centered on a lady who arrived at the Tomahawk in a Model T automobile after driving through the Red Desert.

“Her automobile had no roof so she was tormented with sand driving through the Red Desert,” Frink said.

However, once arrived at the Tomahawk, guests during the early 20th century and the World War II era could enjoy amenities, which other overnight guest places hadn’t even dreamed of yet. The Tomahawk’s basement, now a dusty storage area, was formerly the location of the hotel bar, a bowling alley, pharmacy, dance floor, and even a stage for performances. There was also a barbershop at the Tomahawk Hotel.

“I can remember my mother saying she danced there (at the Tomahawk) in the 1940s,” Frink said. As for the bowling alley, Frink added, there were no automatic pinsetters. Instead, young boys were employed to roll the bowling balls back to the bowlers and set up the pins again.

The Tomahawk Hotel even contained the second or third J.C. Penney store ever, Frink said. Moreover, at one time there was even a variety store and a shoe store at the Tomahawk. Many diaries recorded how impressed they were by staying at a “fancy hotel,” Frink declared.

And for those male guests who felt that the above amenities were simply not enough, there was a discreet, steep back stairway where ladies of the evening could enter the hotel and then ply their trade with interested customers.

The Tomahawk Hotel is being rebuilt and refurbished on the inside, but not as a hotel. One of the current owners, Larry Fusselman, said that work is continuing on the second and third floors to turn the former guest rooms into office space or apartments.

Fusselmann had no definite timeline for when the work will be finished, except to say that “work would go a little faster if right now, today, we had people wanting to move in.”

Fusselman anticipates the second floor being used as office space and conference rooms, while the third floor will likely be studio apartments. Both the second and third floors contain approximately 6,500 square feet of space. Some of the original woodwork will remain, while new woodwork is needed in parts of the building. The first floor will be small shops and offices, as currently being used already.

As for the basement where the bowling alley used to be, Fusselmann said that the hope is that this section will become a banquet hall for weddings or other large party gatherings. The basement contains 8,500 square feet of space.

Besides Fusselman, the other current Tomahawk Hotel owners are Darren Clevenger of Laguna Beach, California, and Marty Carollo of Green River.

Time marches on, but the Tomahawk Hotel marches on with it. At a time when so many old buildings are feeling the impact of the wrecking ball, a place like the Tomahawk Hotel can last for many more decades, or even centuries, because of adaptability, giving current area residents a connection with a completely different time past and cultural era.

Fusselman was happy that at least some historical buildings such as the Tomahawk Hotel are being appreciated and preserved rather than obliterated. “Once they’re gone, they’re gone,” Fusselman said.

This is Part 1 of a two-part story on the history and redevelopment of the Tomahawk Hotel in downtown Green River. Keep an eye out for the second and final installment. Thank you to the Sweetwater County Historical Museum for contributing photos for this story.