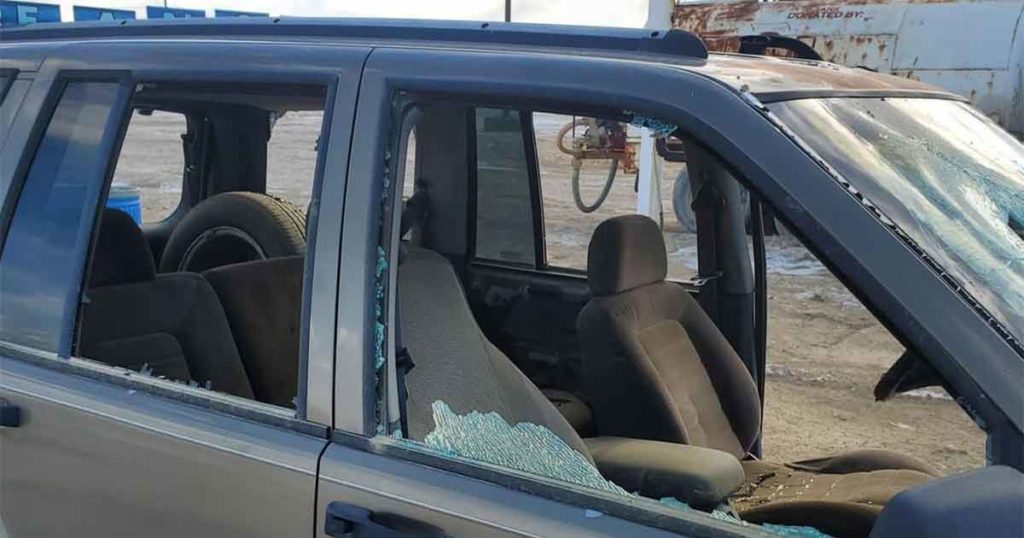 This is just some of the damage a Jeep Grand Cherokee at the Sweetwater Speedway sustained from a recent vandalism. Courtesy photo

ROCK SPRINGS — An estimated $5,000 worth of damage was reported after two vehicles at the Sweetwater Speedway were recently vandalized. Some of the damage included broken headlights, windows, and a windshield.

Some individuals gained access to the back portion of the track and drove their dirt bikes around on the race track even though the majority of the track is fenced off. Beech said the vandals drove their bikes on the track and also used a hammer to vandalize two mud trucks and a water truck parked near the track.

What really angers Beech is both of these vehicles were donated to Sweetwater Speedway for their use.

“I feel horrible,” Beech said. “It’s donated equipment that people have given us to use.”

This is just some of the damage done to the vehicles. Courtesy photos

“Sean Miller is our flagger and it was his Jeep that they broke all the windows out of,” Beech said. “The other mud truck is from Cory Wilder Racing out of Powell. He comes and races here, but we have personally known him for over 20 years. He wanted his truck somewhere it would get used and benefit a race track.”

The mud trucks are used to help prepare the track’s dirt surface for the race cars. They help pack the track surface so it is not slimy to race on, she said.

Burns Towing is a Speedway sponsor and is helping to locate replacement parts to repair the damage.

Even though Beech and the racing community is upset with all of the damages that were done, they know it could have been worse and are thankful it wasn’t.

Beech said the Rock Springs Police Department (RSPD) has already visited the scene and has taken items for evidence. She’s hoping the RSPD will discover who vandalized the vehicles, and anyone with information about this incident is encouraged to contact the department.

Beech is encouraging those who were involved to come forward and admit they made a mistake. She said they can help make it right.

While this puts another obstacle in front of the team when preparing to start the racing season, they will still be ready for their opening weekend on May 28-29, Beech said.