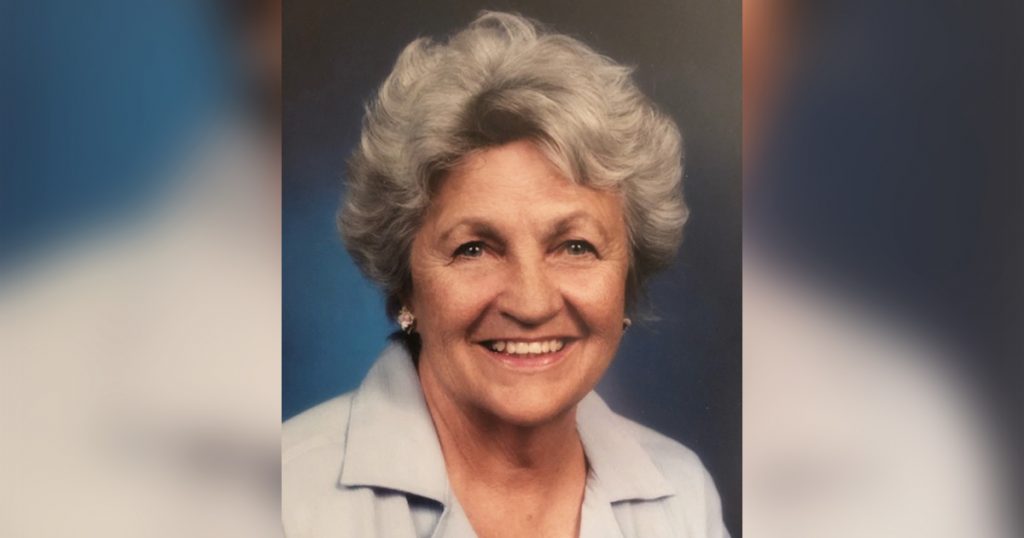 Verna Ray Nebeker West, 91, passed away Thursday, April 2, 2020 at the home of her daughter Abby, in Rexburg, ID. She was born August 20, 1928, in Roosevelt, UT, to Raymond and Lucy Ann Bell Nebeker. They moved to Rock Springs when she was eight years old. She graduated from Rock Springs High School and attended BYU.

She married Larry Owen West in 1949, (later divorced), and they bore seven children: Larry Galen (Wendie), Kimball Spencer, Brady Raymond (Jana), Reid Owen (Jeanne), Drew McKay, Abby Louise (John) Zenger, and Jason Wade West. She was preceded in death by sons Drew and Brady, her mother and father, and sisters Lora McConkie, Ona Baker, and Beulah Beveridge-Mudd. She always wondered why her Lord sent her all these sons when she came from a family of all girls.

Verna had a beautiful voice, and exercised it regularly, particularly with her sister Beulah (Boots). They made beautiful harmony and performed at many venues and talent shows. Music was a big part of her life and her home was always filled with music and fun. She loved a good joke and was a bit of a prankster, with April Fools’ Day always bringing some well thought out plans to prank her children. The biggest compliment children can pay their parents is that they had a good childhood, and our mother ensured we had a wonderful childhood. Despite raising a large family, she always made time for fun and laughter.

She was a devout member of the Church of Jesus Christ of Latter-Day Saints, and served in numerous leadership positions over the years, including Relief Society, Primary, Mutual, Boy Scouts, Choir, Young Women’s, and more. Her strong faith carried her through some difficult times in life, and she always came through them a bit stronger. As age marched on, she spent a few years in Deer Trail Assisted Living, but her last 16 months were spent with Abby and John Zenger and their beautiful family. She was surrounded by their loving and caring family to the end, and our family is forever grateful to them.

She was also very close to her nieces, and sister through marriage and beyond, Marjene Hansen West. She seldom met a person she didn’t like and had many other close friends and neighbors that helped her and cared for her, and for this we are eternally grateful.

Interment will be in the Wasatch Gardens Cemetery in Salt Lake City, UT, to rest by her son Drew. Due to the Covid-19 pandemic and limitations on gatherings and self-isolation orders, no formal burial or funeral services will take place at this time. The family suggests in lieu of flowers that any donations be made to Memorial Hospital of Sweetwater County Foundation Fund, 1200 College Drive, Rock Springs, WY 82901; or Madison Memorial Hospital Foundation, PO Box 252, Rexburg, ID 83440; for the specified purpose of Personal Protective Equipment (PPE).