ROCK SPRINGS – This is way better than just passing GO on the Monopoly board.

Students at Western Wyoming Community College who successfully follow the College’s 16 to Succeed plan for on-time graduation will receive a $1,000 stipend for working hard, staying focused on their educational path, and graduating in two or four years, depending on whether they are full-time or part-time students.

“We tell students to take 16 to succeed because the majority of our associate-degree programs are 64 credits, so 16 credits per semester over four semesters will have them graduating on time, which is the real purpose of this program,” said Mark Rembacz, WWCC’s Director of Student Engagement and Completion. “So if a student wants to take 14 credits in one semester and 18 credits in another, or 15 credits each semester during the school year and another six credits over the summer, that works, too. We just want them to have the mindset that they are going to finish their degrees on time and be academically successful. Sixteen credits each semester, on average, should get them there.”

This strategy has proven to keep students on track and has saved students money, Rembacz noted, because they are not making casual decisions on class choices and course loads.

Western already has the highest graduation rate – 46 percent – of any community college in Wyoming. But the College shares the concerns of state lawmakers that many students may be taking longer than necessary to complete their two-year degrees, thereby delaying their transfer to four-year institutions or their entry into Wyoming’s full-time workforce.

Western officials hope this $1,000 stipend will furnish students with additional incentive to take more credits – 16 is the recommended number per semester for full-time students, eight for part-time students – and complete their degrees within a standard timeframe.

Academic success is another factor driving Western’s 16 to Succeed push. Studies cited by the educational nonprofit, Complete College America (CCA), suggest that students who take more credits are more academically successful than those who take fewer classes during the semester. By encouraging students to take on a heavier course load, Western expects that more students not only will graduate but also will perform better academically.

Western is part of the Complete College Wyoming effort, a state-level initiative, linked to CCA, that aims to increase graduation rates by five percent annually among community colleges statewide. WWCC launched the 16 to Succeed effort in the fall semester, with advisors emphasizing the need for students to take 16 credits each semester or to plan a schedule that keeps them on track for timely graduation.

“Students should remember that summer classes are also available to them as they devise their plan for graduating on time,” Rembacz said. “If students take even one or two classes during the summer, that gives them more flexibility on the number of credits they need to take during the fall and spring semesters.”

Rembacz noted that, although Western officials wouldn’t mind seeing all students take an average of 16 credits each semester, many of the College’s part-time and non-traditional students are balancing their education around many other life responsibilities and simply cannot attend full time. But 16 to Succeed works for them, too, he explained.

“We are encouraging our part-time students to take an average of 16 credits per academic year, which would allow them to complete their degrees in four years,” Rembacz said. “Certainly, if students can accommodate more credit hours, we would like to see that, but 16 credits each year still puts them on track to graduate in four years, and also qualifies them for the $1,000 stipend.”

To receive the stipend, students need only sign and complete the 16 to Succeed Commitment form, found at www.wwcc.wy.edu/engagement/16tosucceed.htm and then complete all credit requirements for their degree to attain graduation eligibility. Once their degrees have been conferred in the agreed-upon timeframe, they will receive the $1,000 stipend. Students who began taking classes at Western in Fall 2013 are eligible to receive the stipend.

Western is also looking at other measures to assist students in focusing their academic efforts into a plan that helps them graduate on time. One of these is the idea of “meta-majors,” broad groupings of academic programs that would help undecided students follow an academic track that moves them closer to graduation even as they remain undecided about their specific program of interest.

“The idea behind meta-majors is that we want students who might previously have been categorized as ‘undecided’ to choose a broad but still well-defined academic focus so that they take the classes that will move them closer to their degree,” Rembacz said. “A student might know that he or she is interested in the hard sciences, for example, but might not have decided between biology, geology, chemistry, etc. But there are many classes that student will need to take for a hard-science track, regardless of the specific discipline, and the meta-major could help keep that student focused on taking classes that will count toward a specific degree, instead of taking a variety of different courses that don’t necessarily add up to a completed program.”

Rembacz said the meta-major idea is still in the planning stages, but he cited it as an example of the different approaches that Western is looking at to aid students in graduating on time.

“The 16 to Succeed initiative is part of a multi-faceted approach to student success and degree completion,” he said. “There is no one measure that will work for all students. But we are committed to finding the best ways to help our students graduate on time and leave Western with a valuable and relevant college degree that will take them wherever they want to go.”

From a press release provided by WWCC 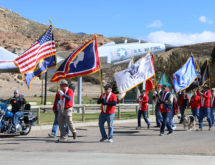