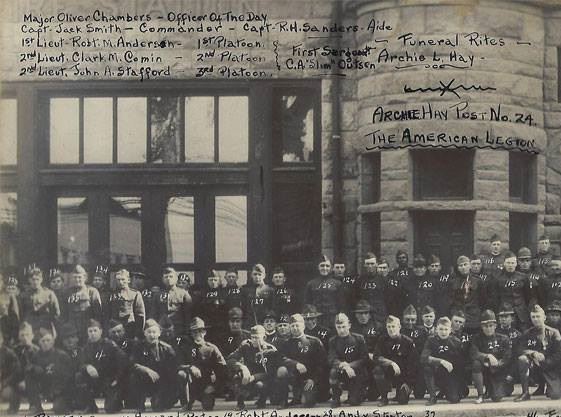 Find out at a special exhibit at the Rock Springs Historical Museum.

ROCK SPRINGS — The Rock Springs Historical Museum will be showing a portion of the artifacts from the American Legion Archie Hay Post 24 the week of April 16.

The items, regularly on display at the Legion Hall, will be accessible to the general public for one week only during the Museums regular hours starting Saturday the 14th through Saturday the 21st.

This display coincides with the Military Appreciation Days to be held April 20th and 21st at Western Wyoming Community College.

Included in the display is a large oil portrait of the Post’s namesake, Archie Hay, painted by local artist Peter Hougard, a three foot long panoramic photo of the local military heroes who attended Hay’s funeral, several firearms including a M1 Garand, the Swagger Stick carried by Hay’s commanding officer, and a Forty & Eight Cap.

Archibald Lawrence Hay was Killed in Action in France, 27 Sep 1918 at the age of 25. He served with Company G, 362 Infantry, 91st Division, U.S. Army. He was a son of John Woods Hay and Mary Ann Blair Hay and had been a lifelong resident of Rock Springs.

His obituary gives an impression of a fine young man: “Archie was a boy who was loved and respected by the whole community. Rock Springs was proud of him as an example of a boy, born and raised here, who had grown into manhood unspoiled, unaffected and in the best sense of the word a gentleman.”

“This display is a chance to see a little bit of World War I and Rock Springs history up close in a way that you may not have had an opportunity to do before” says Museum Coordinator Jennifer Messer. “The Museum staff cannot thank the American Legion, and in particular Leonard Merrell, enough for allowing us to display these wonderful artifacts. It was a pleasure to create this display for the community.”

The Rock Springs Historical Museums is open 10:00 a.m. to 5:00 p.m. Monday through Saturday, and is closed Sundays and city holidays.