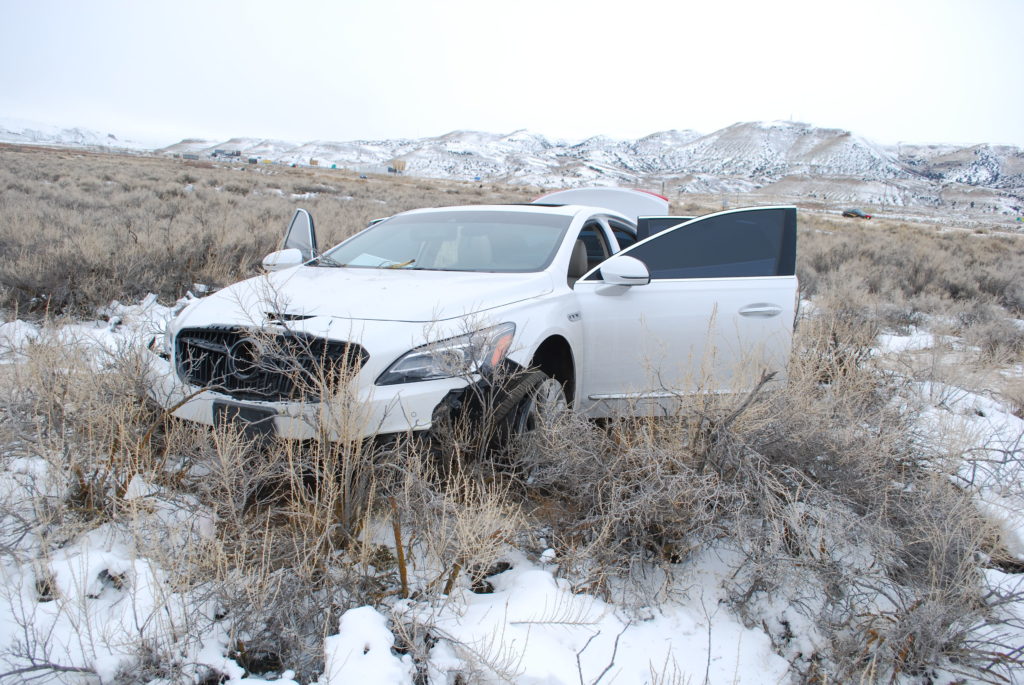 SWEETWATER COUNTY – A Riverside, California man involved in a pursuit with troopers from the Wyoming Highway Patrol on Tuesday (Dec. 6th) has been confirmed not to be a suspect in a bank robbery that occurred that same day in Evanston, Wyoming.

Around 2 p.m. on December 6th, WHP Troopers in Sweetwater County were searching for a possible suspect vehicle involved in a bank robbery in Evanston earlier that day. A vehicle matching the bank robbery suspect vehicle was located and stopped near milepost 85 on Interstate 80 eastbound approximately five miles west of Green River. As the trooper exited the patrol car, the white 2017 Buick LaCrosse took off at a high rate of speed.

As the Buick eluded troopers at speeds reaching 130 mph, deputies with the Sweetwater County Sheriff’s Office deployed spikes on the Buick’s tires at milepost 99 on I-80. At milepost 100, the Buick exited I-80, traversed a ditch, crashed through a right-of-way fence, traveled across a service road and eventually became disabled in an open sagebrush field. The driver and lone occupant in the Buick, 30-year-old Fane Tatofi, led troopers on a brief foot pursuit before he eventually surrendered without further incident.

The Buick had been listed as stolen out of Fremont, California on November 29th.

Tatofi was taken to the Sweetwater County Detention Center in Rock Springs and has been charged with possession of stolen property, possession of burglary tools, fleeing and eluding, reckless endangering, possession of methamphetamine, property destruction and various driving offenses.

No one was injured during the pursuit and apprehension of Tatofi.