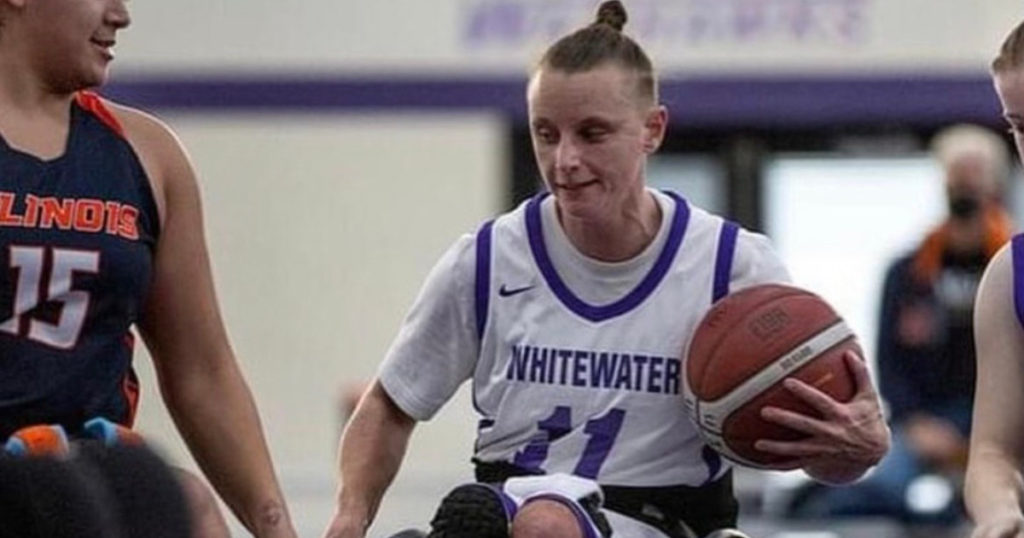 Basketball has served as an important part of Mandy Willmore’s life, but more so over the last few years as it has helped her rediscover herself and her purpose in helping others along the way.

Growing up in Rock Springs, Willmore was heavily involved in high school sports and the outdoors. The opportunities throughout high school eventually led to her chance to play college basketball for the South Dakota School of Mines and Technology.

In 2010, Willmore and her basketball team traveled to Hawaii for an invitational. She headed out a few days earlier before the team arrived with her grandparents. Knowing that her teammates would arrive in just a few days, she decided to take a surfing lesson with the hopes of keeping up with them while riding the waves.

What transpired during that surfing lesson changed her life.

Within the first few minutes of surfing, she noticed that her back was hurting. As she walked back to the hotel, a numbness in her legs progressed until she eventually collapsed.

After a trip to the hospital, Willmore was diagnosed with surfer’s myelopathy, a rare, non-traumatic injury to the spinal cord that left her unable to walk.

Over the next three months, she spent her time rehabbing at the Craig Hospital in Denver, Colorado. Days were not easy and the sudden change in her life was difficult to understand and accept.

“For the first few years, I really wanted to be able to walk again,” Willmore said.

During those first few years, she worked through preconceived ideas she had of what being disabled was like. From who to date, to the type of physical activity she could get, it was a challenge.

After graduating from college, Willmore went into the corporate world, chasing things she thought would bring her happiness and fulfillment. But she struggled to find that purpose and happiness in her life.

“I was not happy with where I was. I was hitting snooze four or five times in the morning before getting up to get ready for work,” Willmore said.

One day she had a change of heart, an awakening for something new and she realized she didn’t want to waste any more time. With aspirations to start a nonprofit, she headed to one of her favorite spots, the Wilderness on Wheels — an adaptive hiking trail with switchbacks up a mountain.

While on her hike she met a retired wheelchair basketball Paralympian who took an interest in her and invited her to join a team she was starting up in Denver. Willmore accepted the invite and soon found herself playing the sport she loved the most growing up.

Her coach told her if she wanted to go back to school to obtain her masters and play for team USA, she believed she could do it. But at that time, she was 28 and had a house and other responsibilities.

Six months passed and hitting the snooze button every morning brought her to the realization that her life could be whatever she wanted it to be. With new found confidence, she quit her job and moved to Wisconsin during the middle of the COVID-19 pandemic to pursue her masters degree and play wheelchair basketball for the University of Wisconsin Whitewater.

And that’s when everything began to change.

This January, her college basketball coach was selected as the Team USA Wheelchair Basketball Head Coach. She invited Willmore to apply for the team tryouts in Colorado Springs, Colorado.

“It was the most intense training I’ve ever done,” Willmore said.

The feeling of being on the court and breaking the huddle as Team USA was a surreal feeling and one of the coolest experiences of her life.

Earlier this month, the final roster was announced which will take 12 athletes to Sao Paulo, Brazil for the world qualifiers. Willmore was one of the 12 to go, earning her first Team USA selection. If the team qualifies in Brazil, they will head to Dubai for the World Championships in November.

Finding wheelchair basketball made all the difference for Willmore who was missing that aspect of sport that has always been a part of her identity.

Not only did moving to Wisconsin give Willmore an opportunity at basketball again, but it landed her the dream job of a lifetime.

Around the same time her coach informed her of trying out for Team USA, she also told her about a job position at GLASA (Great Lakes Adaptive Sport Association). She applied and received a job offer as a program manager which allows her to help others find the joy of adaptive recreation.

“I’m so thankful that I found a job that I’m in love with. I’m excited to wake up and go to work every day,” Willmore said.

Her goal is to help others find their “wheelchair basketball” just like others in her community helped her to discover.