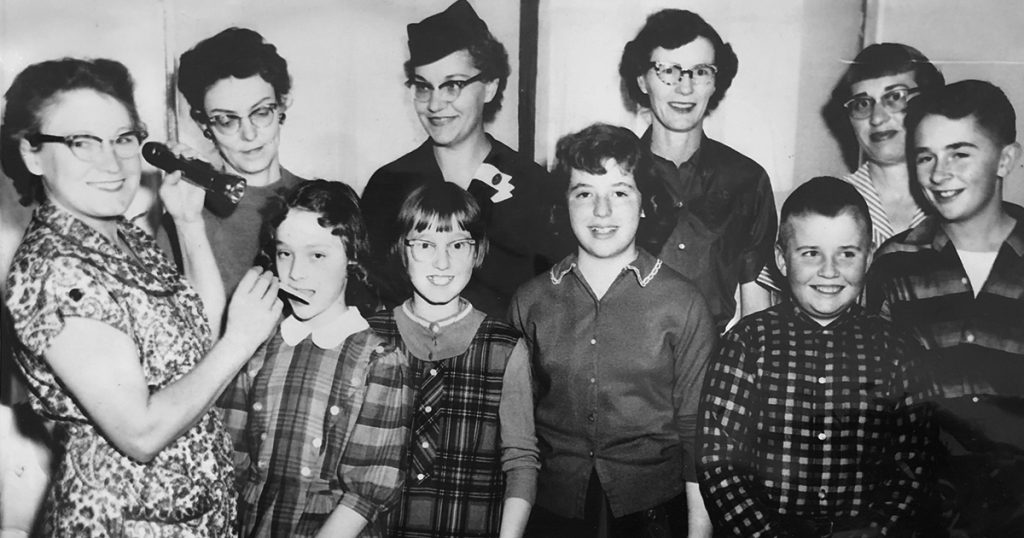 Thanks to the Woman’s Club of Rock Springs, a city-wide campaign to check kids’ throats for possible streptococci infections or rheumatic fever and other childhood diseases was completed in Sweetwater County. Courtesy photo

ROCK SPRINGS — Even though National Women’s History month came close March 31, the Woman’s Club of Rock Springs has more than earned a place in Rock Springs’ history and their story continues.

In later years, students and their parents would benefit from the alcohol and drug program organized by Muff Guttel and the Woman’s Club of Rock Springs’s membership. With concerns about the growing use of alcohol and drugs, the women sought out a plan to educate students on the dangers involved. The program came to be known as the DARE program taught by police officers to students at the elementary schools in the county.

Of all the incredible acts of kindness performed by the Woman’s Club of Rock Springs, there was nothing quite like the magic they added at Christmastime. They made the Christmas season special for children, needy families, widows, veterans, and those hospitalized.

One Christmas, 13 needy little girls, caught the attention of the group. The women dedicated a day to the little ladies with Santa providing gifts, a program to entertain, and then treated to a show after being fed a delicious Christmas feast for lunch.

Wyoming General Hospital was often a recipient of the generosity of club. From Christmas boxes to medical supplies, and even scholarships for nurses, the club delivered. Other projects they got behind included, but weren’t limited to, the Red Cross, the Tuberculosis Society, Infantile Paralysis, layettes for newborns, Mother’s March on Polio, the Cancer Drive, Crippled Children’s Society, Meals on Wheels, and too many more causes to mention.

The women were even involved in opening a maternity unit at the hospital. However, no list would be complete without mentioning the Lending Closet that still exists and benefits the community today.

The Lending Closet began 70 years ago under the leadership of Mrs. William Milligan. The idea was to aid community members during times of illness when a wheelchair, hospital bed, crutches, and those types of hospital equipment were necessary.

The Lending Closet would house the items borrowed as needed easing the burden of the medical expense. Items were both donated and purchased according to the needs of the community. The Lending Closet is temporarily closed with the current pandemic threat will continue to provide this service to the public with no more effort than a phone call.

One final program worth mentioning as a reminder of the positive done in the face of an epidemic. At the close of the 1950s, Rock Springs fought Rheumatic Fever that affected people in vast numbers. The streptococcus virus spread through families and school children faster than a pat of butter on hot pancakes. But even Rheumatic Fever was no match for the club.

The women researched to find a way to slow the spread in the community. Past President Helen M. Johnson explained in her historical narrative:

“The most important aspect of Mrs. Robert Bunning’s (Mary) year in 1958-59 was the inauguration of the Rheumatic Fever Throat Swab program in the elementary grades. It was a tremendous organizational project with club members actively working in their children’s schools as swabbers and assistants. The program involved examining all grade-school children and taking a culture from those whose throat indicated that the streptococcus germ might be present. The culture was then taken to the hospital technician who did a 48-hour test on it. Those children who had a positive culture were sent to their physicians for treatment. It had been proved that this cut down rheumatic fever by as much as 80 percent and absenteeism by a very large percent.”

The club provided the throat depressors and swabs for use in the program and took care of all the clerical work being done as well as supervising the organization of the program.

I remember standing in line with my classmates during the 1970s to get my throat swabbed. The line would extend down the entire hallway at Wilson Elementary in Green River.

We would try to wait patiently, but a classmate might get the giggles or attempt to cut in front of another student causing the teacher to quickly hush the disturbance so that those in classes could continue learning.

Before the week was past, thin white slips of paper would be delivered to the classrooms announcing who had the virus and needed to be picked up immediately by a parent or guardian. It is incredible to me that a group of women came together, researched, and instituted the Rheumatic Fever Throat Swab program to thwart a virus that threatened our schools and community.

Like all of their projects, they didn’t just offer ideas. The women came out of their homes, rolled up their sleeves, and made their ideas a reality.

There is so much more to tell about this fantastic group of women. The number of accomplishments attributed to the Woman’s Club of Rock Springs over the past century is vast.

The faces have changed from year to year. The community evolved as coal mining slowed and trona mining took over as the economic base. People have come and gone with the booms and busts. However, the mission of the General Federation of Wyoming Woman’s Club of Rock Springs has remained the same:

“Service is the standard of life, and love is the motive of service.”

This is the Part 2 on a two-part series on showcasing the woman who made Rock Springs what it is today for Women’s History Month. To read the first article click here.