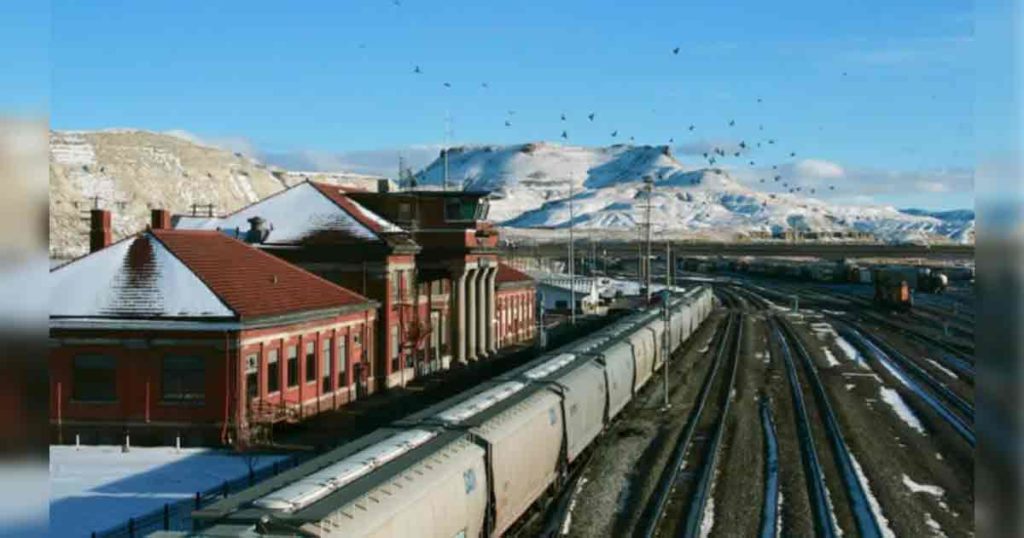 The Green River Union Pacific Depot in the winter of 2019. The railroad town was long friendly ground for Wyoming Democrats. People familiar with the region’s politics say change began when an oil boom in the early aughts brought in blue-collar workers who didn’t identify with Sweetwater County’s union-centric, democratic leaning politics. (Andrew Graham/WyoFile)

In Sweetwater County, the November election capped — at least for now — a decades-long shift of one of the state’s few Democratic strongholds from blue to red.

The transition marks a milestone for the state’s southwest region, as well as its statehouse, which is ever-more dominated by the Republican Party. The Rock Springs and Green River election results also represent gaps the state’s struggling minority party must overcome if it hopes to achieve relevance anytime soon, Democratic politicos say.

Democrats retained one seat in the county, that of retiring Rep. JoAnne Dayton-Selman. Democrat Chad Banks, a former Rock Springs city councilman and manager of an urban renewal initiative, won the seat.  He was unopposed.

Times weren’t always so tough for Democrats in the state’s southwest.

Those lawmakers worked in a statehouse with a more robust partisan divide. The 2005 Legislature had 17 Democrats in the House and seven in the Senate, according to Ballotpedia.

In contrast, just two Democratic senators and seven Democratic representatives will take their seats this January.

Working on the railroad

Democratic Party politics in southern Wyoming share an origin source with statehood itself: the construction of the Union Pacific railroad. The development of coal mines and train yards across the railroad’s route drew union laborers and built a stronghold for Democratic politicians, according to WyoHistory.org, a project of the Wyoming State Historical Society.

Though not everyone familiar with the area’s political history considers the union vote naturally Democratic, they agree that a strong labor movement helped the party’s candidates.

“It is very definitely because of some pronounced union history,” said Chris Boswell, a Democrat who served as state representative from Green River from 1993 to 2003 and went on to a long career in Wyoming government and politics.

But, “union labor in Sweetwater County was not a solid vote for Democrats,” Boswell said.

Still, until the mid-2000s at least, an affiliation with the Democratic Party was helpful for winning public office in Sweetwater County, according to residents and former state politicians.

Nate Martin, who grew up in Rock Springs and today directs the progressive political organization Better Wyoming, remembers his once-Republican mother registering as a Democrat to make sure she had a say in primary elections, he said. It’s a tactic left-leaning residents in many parts of Wyoming are familiar with today, but in reverse.

A slow-moving but fundamental change in the county’s bedrock politics coincided with an oil and gas boom beginning in 2006, around the time of Craft’s first election, locals say. To Craft, the change seemed to come on fairly quickly.

“After that first election, I never again put ‘Democrat’ on my campaign signs,” she said.

A different shade of blue collar

“If you get a job at the mines or the power plant, you’re [often] working there the rest of your life,” Martin said.

The oil-and-gas boom of the early aughts brought an influx of new workers to the region. The jobs may have been considered blue collar like those on railroads and in coal mines and power plants, but the politics were distinct.

If local and national union leaders tried to push their members’ votes toward Democrats, oil and gas bosses had a different message for their non-unionized employees, Boswell recalled.

“Their employers very effectively tell them, ‘the Republicans will support your continued livelihood and the Democrats are trying to put too many restrictions on our way of doing business,’” he said, “so vote Republican.”

Democrats struggled to counter the suggestions that they were a threat to the oil and gas industry, he said. “If there’s a perception that one side of the political equation is more interested in my paycheck and my financial security, then the votes are going to go that way.”

By 2012, the year of President Barack Obama’s reelection, Democrats were losing ground in Sweetwater County, losing two seats in the House. The party had already lost a Senate seat by that election.

Craft was always supportive of the energy industry, she said. She recalled “hearing whispers that people were being warned against Democrats because they were the enemy of oil and gas, which upset me greatly,” she said, “because I’ve always known where the bread is buttered here.”

Her former House district used to include the oil and gas town of Wamsutter. Craft always won her elections, but lost the vote in that town, she said.

“I would go out there and campaign heavily and everyone was happy to see me and everything was good, and then they never voted for me,” she said.

Today, the state’s oil and gas industries are both in a bust. The influx of new workers has ceased. But the political change stuck.

“The flavor that was imparted then is still with us and it remains here,” Craft said.

Wyoming Democratic politicians, and voters, have often considered themselves as distinct from the national party. In Wyoming, blue-party politicians often support the fossil fuel industry and resist gun control measures.

At the statehouse, many Democratic lawmakers focus on issues they believe can gain support across the aisle, like Blake’s focus on wildlife protections that were popular with both hunters and conservationists.

Such tactics, however, weren’t enough to overcome polarized politics, Blake said. “I had several people tell me, ‘you’re a Democrat. There’s no way I can vote for you,’” he said.

Many in Wyoming, including prominent politicians, place coal’s decline at the feet of Democratic politicians and policies.

“Fossil fuels are at the top of people’s lists, certainly for their own livelihood,” Joshua Coursey, a native of Sweetwater County and the director of the hunters’ organization Muley Fanatics, said.

The national Democratic Party is represented in ways that voters in most of Wyoming find hard to accept, too. The national party stance on gun control also displeases voters in the area, Coursey said.

“There seems to be more of a left leaning, socialist type of governing, and that just doesn’t align with people’s values in southwest Wyoming,” he said. “When you think Democrat, [California Sen. Dianne] Feinstein, [Senate Minority Leader Chuck] Schumer and [House Speaker Nancy] Pelosi come to mind and any association with that in southwest Wyoming is not only not appealing… it’s appalling.”

Can Dems come back?

Democratic losses in Sweetwater County were magnified by Rep. Sara Burlingame’s defeat by Republican John Romero-Martinez in Cheyenne. Democrats only achieved one flip, as Trey Sherwood captured a seat previously held by Rep. Dan Furphy in Laramie. Furphy moved on to the state Senate, and Sherwood defeated Republican Matthew Burkhart by fewer than 100 votes.

Albany County was Wyoming Democrats’ bright spot in the election. The county voted for Donald Trump in 2016, but supported President-elect Joe Biden this year. Democrat Sue Ibarra also narrowly defeated the Republican chair of the county commission, Terri Jones. Albany and Teton were the only Wyoming counties to vote blue this year.

While incumbent Democrats lost in Sweetwater, Republican incumbents beat back a wave of aggressive challenges in Laramie County, in some cases by tight margins. To win back seats, the party will need to think long term and candidates will need to develop relationships with voters that will weather polarized politics, Boswell said.

Trump won’t be on the ballot in Wyoming in 2022. Politicos contemplating Sweetwater County, or Wyoming at large, aren’t certain if that gives Democrats an opportunity, but, they say, the state’s dire straits might crack the door: If the fossil fuel economy continues to wallow, and Wyoming’s economy with it, voters might be open to change.

“The ability to address what I think everyone agrees is a very significant problem… all rests with one party right now,” Boswell said. “If that party fails, and if Wyoming falls into too deep an abyss … that’s the opportunity for the folks that are challenging the status quo. Whether that’s a third party, from within the Republicans or from Democrats.”