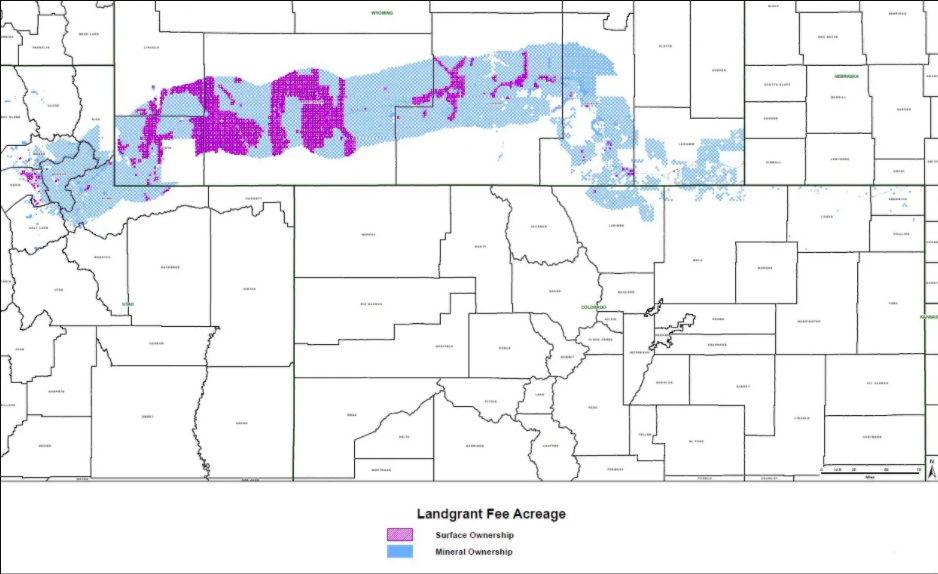 A map of 1 million acres of surface land (in pink) and 4 million mineral acres (in blue) the state's top officials want to buy from Occidental Petroleum. The map was provided to WyoFile by the governor's office.

Nearly three weeks after submitting a bid to Occidental Petroleum for 1 million acres of land and 4 million acres of mineral rights, the state of Wyoming has had no word from the oil and gas giant, state officials said this week.

“I don’t exactly know what that means,” he said of the silence. “My sense is we’re being considered.”

But one key official in the potential transaction, Wyoming Chief Investment Officer Patrick Fleming, said the silence could bode poorly for Wyoming’s prospects. The lack of response so far is “possibly not good for us,” Fleming told WyoFile in a text message Monday.

Wyoming is one of six potential buyers Occidental invited to submit bids for the swath of land and minerals along the I-80 corridor. The land’s checkerboard pattern of ownership — a legacy of historic land grants from the federal government — plays a defining role in many aspects of energy development, cattle grazing and recreation across southern Wyoming.

The other bidders are either unknown or aren’t being disclosed by state officials. Proponents of the deal have suggested rival buyers could be anyone from the billionaire Michael Bloomberg to the Mormon Church to a foreign nation like China.

Wyoming submitted its initial bid on July 8, Gordon’s energy policy advisor Randall Luthi told WyoFile. However, the state then “superseded” that bid with a new offer on July 10. Whether the second bid was higher than the first “remain[s] confidential,” Luthi wrote in an email Wednesday.

“There was additional information analyzed by the investment bank, which caused a new look at the bid,” Luthi wrote. The investment bank Luthi is referring to is Barclays, the state’s high-priced consultants on the deal.

Officials from Barclays were also in the dark on what Occidental was up to and what it could mean, Luthi said in a phone interview Monday. “They’re curious as well,” he said. “Most speculation has been that not hearing immediately was a good thing. That means you weren’t rejected right off the bat.”

Still, Occidental also “certainly could be” negotiating with another bidder, Luthi said. “Anybody can speculate what they’re doing or not doing and that’s all it would be,” he said.

Wyoming’s bid does not have an expiration date, and there was no timeline for Occidental to reply, Luthi said. Both Luthi and Fleming said the next step is in the seller’s hands.

“Given the amount and complexity of the purchase and since there are a lot of issues that would still be negotiable once OXY decides to negotiate further, we are truly on hold,” Luthi wrote. “At this point, we don’t see any reason to withdraw the bid, it was submitted in good faith and we are confident it is being carefully and conscientiously considered.”

Wyoming hired Barclays to assess and advise on the purchase. The state agreed to pay the investment giant $2.5 million regardless of the deal’s outcome, and pay more fees depending on the purchase price if it does go through. To date, Wyoming has paid $1 million, according to a review of the Wyoming Auditor’s payment data.

The first $500,000 came out of a state building account. The second installment came from the governor’s budget.

In his remarks to the Cheyenne Rotary Club, Gordon again called buying the land a potential improvement for the state’s returns on its investment portfolio. Barclays was asked to evaluate all the potential cash flows from the land and mineral assets, Gordon said.

“It would add about 2[%] to 3% to our return posture” on the state’s investments, Gordon said. Barclays made the analysis of returns with a certain price in mind, one that the state did not exceed in its offer, he said.