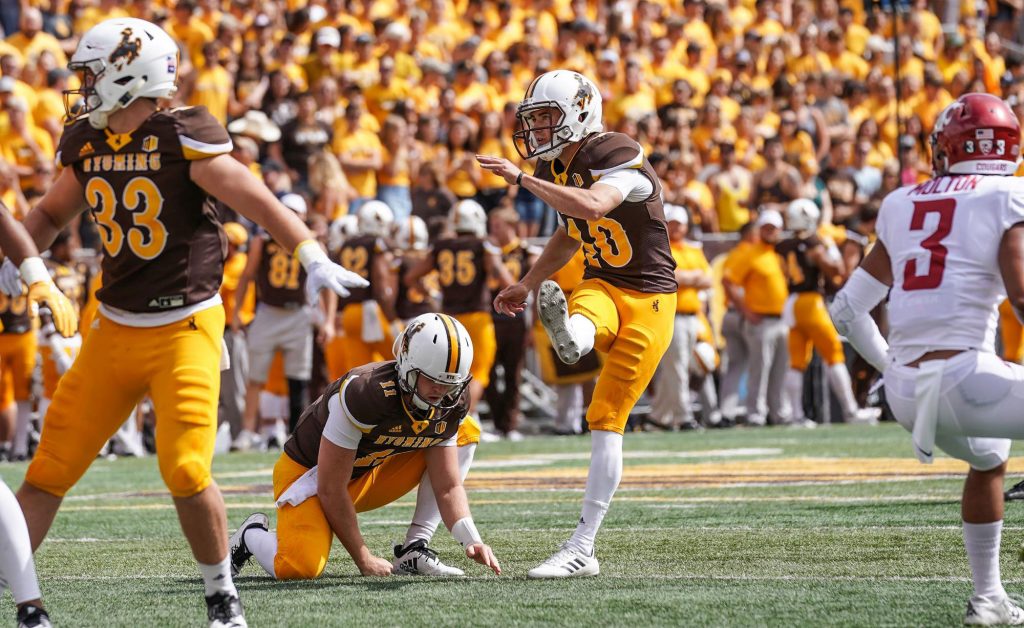 LARAMIE– The Wyoming Cowboys will welcome the Wofford Terriers to War Memorial Stadium on Saturday in the first meeting between the two schools.

Wofford College is located in Spartanburg, S.C. It is only the third time in history that Wyoming has played a team from the state of South Carolina. Saturday’s game is schedule to kick off at 2 p.m., M.T., from Jonah Field at War Memorial Stadium.

On game day, tickets will be available for sale on the east side of War Memorial Stadium.


Another in a Series of Challenging Opponents

Wofford is a talented team that advanced all the way to the quarterfinals of the 2017 NCAA Football Championship Subdivision (FCS) Playoffs before losing to eventual national champion North Dakota State.

The only other South Carolina teams that Wyoming has previously played are Furman and The Citadel. The Cowboys are 1-0 versus Furman, having defeated the Paladins 20-14 in 2001 in Laramie.

Furman is based in Greenville, S.C. Wyoming is also 1-0 versus The Citadel from Charleston, S.C. In 2002, UW defeated The Citadel by a score of 34-30 in Laramie.

The Wofford Terriers are only the third current member of the Southern Conference that Wyoming has played in its history. The other two previous SoCon opponents faced by the Cowboys are those same two South Carolina teams Furman (2001) and The Citadel (2002).

The Cowboys have posted a 13-2 record in those games. All 15 games have been played in War Memorial Stadium.

Cowboy strong safety Andrew Wingard has moved into very rare company this season. With his 20 tackles in this, his senior season, Wingard now has 387 career tackles.

In his most recent game, he recorded 12 tackles versus Missouri. Those 12 tackles moved Wingard into the No. 3 spot on Wyoming’s career tackle list, passing former Cowboy safety John Salley, who was credited with 379 career tackles from 1979-82.

Wingard has also passed two other former Cowboy greats this season — Chris Prosinski, who was credited with 373 tackles during his career from 2007-10, and Gabe Knapton, who made 368 tackles from 2008-11.

Wingard is also approaching the Mountain West Conference record for career tackles. That record is held by Carmen Messina of the University of New Mexico, who was credited with 454 tackles from 2008-11. Wingard trails Messina by 67 career tackles.

Junior place-kicker Cooper Rothe is having another outstanding season in 2018. Rothe is a perfect 5 of 5 in field-goal attempts this season, including making a career long 51-yarder at Missouri last week.

His five field goals this season were made from 36 and 39 yards at New Mexico State, from 30 yards vs. Washington State and from 51 and 36 yards at Missouri.

Rothe has made his last eight consecutive field goals, including making all three of his attempts in the 2017 Famous Idaho Potato Bowl victory. His last miss was a 49-yarder in his final attempt at San Jose State in the last regular-season game of the 2017 season.

After missing the 2017 season due to injury, redshirt junior cornerback Antonio Hull has bounced back strong this season. Hull has been very productive through the first three games of the season, particularly in creating takeaways for the Cowboy defense.

Hull has a team high two takeaways this season. He intercepted a pass against Washington State, and against Missouri he both forced a fumble and recovered that same fumble when he stripped the ball out of the arms of a Tiger receiver.

Prior to missing last season, Hull started nine games as a true freshman in 2015, and started 11 games in 2016. He is perhaps best remembered for knocking down a two-point conversion pass attempt in 2016 on the final play of the game to preserve a 34-33 win over #24 ranked San Diego State.

Hull is tied for No. 10 in the nation in fumble recoveries this season and ranks No. 20 in interceptions.

Saturday’s game will be video streamed on GoWyo.com, on the Mountain West Network and on Stadium. The game will be broadcast on radio over the 26 affiliate stations of the Cowboy Sports Network. The radio pregame will begin at 1 p.m. this Saturday.