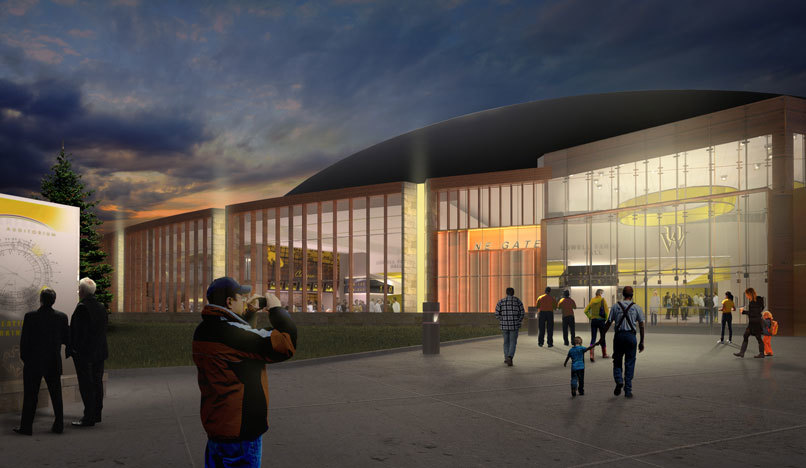 Laramie, Wyo — Wyoming’s $30-million, Arena-Auditorium renovation project officially launches today when the University of Wyoming will recognize the generosity of 36 private donors and the generous support provided to the project by the Wyoming State Legislature.  Recognition of those individuals will take place during a halftime ceremony at today’s Wyoming-Nevada men’s basketball game.

The $30-million redesign and enhancement of the Arena-Auditorium is the largest fundraising effort for Wyoming Basketball in school history.  Fundraising and planning efforts for the AA renovation have been taking place over the past several months, and due to the great response from private donors and members of the Wyoming Legislature the project is now a reality.

Construction on Phase I of the Arena-Auditorium renovation will begin immediately after conclusion of the regular season for the Cowboy and Cowgirl Basketball programs.

“We are extremely grateful to all of those individuals who have stepped forward to make this project possible,” said University of Wyoming Athletics Director Tom Burman.  “Cowboy and Cowgirl Basketball generate a great deal of passion around our state, and we know how proud the people of Wyoming are of the young men and women who have worn the Brown and Gold through the years.

“The renovation of the Arena-Auditorium is something that is necessary to provide our student-athletes and coaches with the best in competition and practice facilities in one of the most competitive basketball conferences in the country — the Mountain West.

“The enhancements to the Arena will also benefit fans as the venue will have state-of-the-art HD video boards, sound system, lighting and scoreboards.  The sight lines and quality of seating will also be improved. “In addition to making the Arena-Auditorium a first-class competition venue, the redesign will provide our teams with much-improved practice facilities and first-class locker-room, strength and conditioning and sports-medicine areas, which are all critical elements of recruiting the best student-athletes to the University of Wyoming.”

At halftime of today’s men’s basketball game, major contributors to the renovation project will be recognized.  Included in that recognition will be the announcement of the naming of the court in the Arena-Auditorium the Maury Brown Court.  It will also be announced that a sculpture has been commissioned of Wyoming All-American Kenny Sailors.  The sculptor for the statue will be Rudy Gunter, a University of Wyoming graduate and longtime resident of Green River, Wy.  The sculpture project has been led by Cowboy Joe Club member Bruce Pivic of Rock Springs, Wy.  The 22-foot high Sailors’ statue will be incorporated into a dramatic new entrance to the Arena-Auditorium.

Successful Cheyenne businessman Maury Brown, for whom the court is being named, had this to say about his involvement in the Arena-Auditorium renovation.  “I am a lifelong fan of Wyoming Athletics,” said Brown.  “I started listening to Wyoming basketball and football games on the radio back in the early 1940s.  I am excited to have the opportunity to be involved in this new chapter of Wyoming Athletics, and I am proud to be able to give back to the State and all of the people who have been so good to me.  Go Cowboys!”

The contributors were also recognized prior to Saturday’s game at a luncheon in the Wildcatter Stadium Club & Suites.

Phase I of the project will see entirely new spaces created for the Cowboy and Cowgirl locker rooms.  New strength and conditioning, sports medicine and visiting locker-room areas will also be created in Phase I.  The court area will be re-oriented 35 degrees and expanded to provide the Cowboys and Cowgirls with additional practice space.

The biggest change in fan amenities during Phase I of the project will be all new seating in the lower bowl below the concourse level.  All lower-bowl seating will feature new padded chair-back seats that will be approximately 22 inches wide — compared to the current Arena seats that are 18 inches wide.  Courtside seating that will expand up to the edge of the court will help add to the Arena’s outstanding home-court advantage for both Cowboy and Cowgirl games.

Two new video boards will be installed in Phase I along with a new video control room that will be linked to both the AA video boards and the video board in War Memorial Stadium.  Phase I will be completed prior to the start of the 2014-15 men’s and women’s basketball seasons.

Phase II of the project will focus on development of new fan areas on the concourse level of the Arena.  Those will include the new grand entrance to the Arena on the east side of the building, the creation of a new ticket office to serve Cowboy and Cowgirl fans, the addition of a Club Area that will also house the UW Intercollegiate Athletics Hall of Fame and renovation of concession and rest room areas.