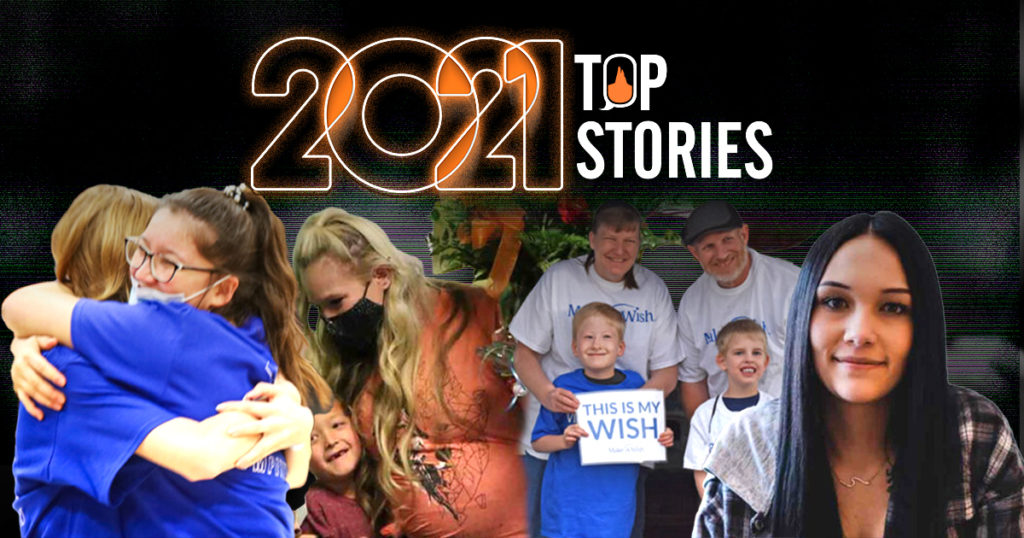 SWEETWATER COUNTY — As 2021 comes to a close, the employees at SweetwaterNOW can’t help but think about what the county has witnessed first hand throughout this year.

From breaking news, to heart-warming feature stories showcasing the best parts of this community, to stories we even thought were hard to believe, we covered it all. It’s hard to select just 10 stories to review all of 2021, but we still completed the time-consuming and memory-jolting task.

Before revealing our top picks, we want to thank you, our wonderful readers and subscribers, for sharing your stories, photos, videos, and news tips with us. We are grateful to live in such an amazing community with so many trusting us to tell those stories.

For Rock Springs residents Caiya Jackson and her fiancé Morgan Brown, the excitement of having their first child was something they had never experienced before.

Caiya said the pregnancy was going pretty well until around her 20-week appointment. She said that’s when doctors at Memorial Hospital of Sweetwater County noticed an abnormality with the baby’s heart rate. Jackson was quickly referred to the University of Utah and also Primary Children’s Hospital in Salt Lake City.

From there, Caiya described the rest of her pregnancy as a whirlwind. Due to the suspected leak in the baby’s heart Caiya was told she needed to have the baby in Salt Lake City so the baby could receive immediate care.

The combined Make-A-Wish week and blood drive between RSHS and GRHS came to a close on Thursday evening during the high school basketball games in Rock Springs.

Green River Police Department Has A New Buddy to Lean On

Buddy will be the first therapy police canine in the state of Wyoming, according to City Communications Administrator Steve Core.

The City received the grant from the Children’s Trust Fund and Police Chief Tom Jarvie said several donations, including $1,250 made by nine-year-old Jason Barrera, have been received by the GRPD to help supplement the program.

Devastation to Graduation: The Story of Katilin Kindel

On November 21, 2018, the then 17-year-old’s life changed dramatically after a single car rollover left her paralyzed the day before Thanksgiving.

Kaitlin, who had recently found out she was pregnant and dropped out of high school, was traveling with her boyfriend at the time to visit her family in Utah for the holiday. There was excitement prior to the trip to spend some time with her family which she hadn’t done for quite some time.

GREEN RIVER — Dreams do come true, and on Wednesday, Solomon Flinders’ wish for his very own playhouse was granted.

Make-A-Wish Wyoming and volunteers rallied together to help make Solomon’s wish for a playhouse come true this week.

Solomon, 8, has Prader-Willi Syndrome (PWS) which is a genetic disorder. His mother, Erin Wight Flinders, said that due to his disorder he’s only allowed 900 calories a day and has to take growth hormone shots daily. Solomon has low muscle tone and has to visit a PWS clinic once a year to visit with eight different specialists. He is considered nonverbal, though he can talk some.

Rockin’ From The Rain Fundraiser Reaches $53K for Flood Victims

Residents once again showed their profound generosity by opening their wallets at the Rockin’ from the Rain fundraiser last Sunday. Folks donated more the $53,000 to help victims of the July 28 flood in Rock Springs.

POINT OF ROCKS — In a letter to Rock Springs Mayor Tim Kaumo, Pacific Minerals Inc., doing business as Bridger Coal Company, informed the City of Rock Springs it “will be permanently closing its underground mining operation.”

According to the letter signed by Bridger Coal Company Mines General Manager Jon C. Brown, on or after November 19, 2021, the Bridger Coal Company will be closing its underground mine, which is located at 1088 Nine Mile Road, Point of Rocks. A total of 94 employees will be impacted by this closure.

“Employees covered by the collective bargaining agreement do not have bumping rights; however, they will have bidding rights to our surface mining operation,” the letter goes on to state.

GREEN RIVER — It was a surprise Green River teacher Brittney Montgomery will never forget. Shortly after the Pledge of Allegiance was recited this morning students and teachers filled the hallways to surprise Mrs. Montgomery.

First grade teacher and Wyoming’s 2022 Teacher of the Year, Mrs. Montgomery was then escorted out of Principal Steve Lake’s office to a shocking sight. With inspirational music playing over Harrison Elementary School’s speaker system, Montgomery was quickly greeted with a vase overflowing with flowers and too many helium-filled balloons to count.

She immediately started to tear up when she realized what was happening. In shock, Montgomery was asked to make her way around the school, where students and staff alike clapped their hands and shouted things like “She’s Teacher of the Year,” “Congratulations Mrs. Montgomery,” and “We’re so proud of you!”

Wyoming’s First Nuclear Facility to be Located in Kemmerer

SWEETWATER COUNTY — Representatives from Rocky Mountain Power (RMP) and TerraPower announced to the Sweetwater County Commission today that the new Natrium nuclear project will be located in Kemmerer.

Rock Springs, Gillette, and Glenrock were also in the running for the first facility. The Sweetwater County Commission congratulated Lincoln County after hearing the announcement.

“We hope we’re in line for the second one but by the same token, I see it as a win-win for Sweetwater County working closely with Lincoln County,” Chairman Randy Wendling said.

Stranded Trucker Thanks Rock Springs Residents for Their Hospitality

ROCK SPRINGS — One of the many semi truck drivers who was stranded at the Sweetwater Events Complex around December 11 due to Interstate 80 being closed made sure to write a letter to the City of Rock Springs thanking Rock Springs residents for their hospitality.

While the emailed letter was not read aloud during the Rock Springs City Council meeting Tuesday evening, Rock Springs Mayor Tim Kaumo pointed it out saying he wanted to thank Kimberly Davis for writing the letter to the city acknowledging all the great things Rock Springs residents did while truckers were stuck here.

The emailed letter from Kimberly Davis said she was one of the many truck drivers who was parked at the Sweetwater Events Complex over the weekend.

Thanks for joining us for a snapshot of what we thought were some of the biggest stories we covered this year. 2021 was certainly a busy and unforgettable year, but we are looking forward to what 2022 will bring.

Thanks again for deciding to come along with us for the ride.