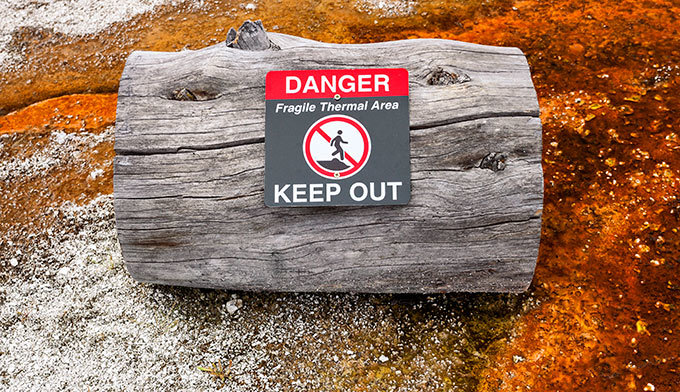 Don’t bother asking Lee Whittlesey about his favorite Yellowstone ghost stories. He doesn’t believe in ghosts. He doesn’t need to.

The Yellowstone National Park historian knows horror stories far scarier than made-up specters. They are haunting, disturbing and particularly terrifying because they actually happened. These are the stories of people falling into boiling water, of wild animals attacking and feasting on flesh, and the unsolved mysteries as to whether a person fell or was pushed.

“(These) are the ultimate scary stories in many ways, because they are real,” Whittlesey said.

Whittlesey first documented Yellowstone’s most unusual deaths in 1995 in his book “Death in Yellowstone: Accidents and Foolhardiness in the first National Park.” This Halloween, there are even more of these true tales to read with an updated version Whittlesey released in early 2014.

There’s a lot things that can kill you in Yellowstone: drowning, falls and avalanches, poisonous plants, hypothermia, falling trees, falling rocks, forest fires, bear attacks, lightning strikes, gas explosions and murder — not to mention the wagon wrecks and runaway horses more common in the early days of the park. Whittlesey documented the park’s most unusual deaths, excluding those from traffic accidents, random illness and high-elevation heart attacks and snowmobile wrecks, in the first edition. He told the stories as a historian, honestly and without shying away from the sometimes-gruesome details.

The updated version, divided into “Death by Nature” and “Death by Humans,” contains all the stories from the first edition, plus 60 new accounts, many from the last 20 years and some from further back, unearthed through research and tips from readers. There’s also expanded versions of some of the classic stories found in the first edition.

Whittlesey was 4 years old the first time he visited Yellowstone from Oklahoma. The landscape entranced him and the fishing impressed his father. The family returned many times. When Whittlesey was 17, he met a ranger working on a garbage truck who invited him to an employee dance. It was so much fun Whittlesey knew he wanted to work in the park one day.

“I couldn’t quite ever get (Yellowstone) out of my system,” he said.

The next summer Whittlesey had his own job on the back of a garbage truck in the park, starting a long intermittent career that lead him to law school, graduate school for history and eventually the full-time job of park historian.

But it was in 1991 when Whittlesey worked for a tour bus company that the idea of “Death in Yellowstone” was born. A group of guides sat talking about the books someone should write about the park when someone mentioned all the ways people died in Yellowstone.

Whittlesey saw the chapters unrolling in his head. He’d already written and published books on history and knew where he could find the pertinent information. He published the book in 1995.

In 2000, three young seasonal employees were walking back to their car in the dark after a day at the Firehole River. Hands joined, they jumped over a stream of steam, not realizing they were headed toward Cavern Spring. They landed on the precipice of the spring. The Earth crumbed below their weight as they tumbled into the deepest part of the 178-degree pool. It was the first time in documented park history three people were critically burned at once. All three were rescued, although one died in the hospital. The incident and the lawsuit that followed piqued Whittlesey’s interest in updating the book. Four grizzly bear fatalities in 2010 and 2011 after 25 years without a bear-related death in the park made him realize it was time for another edition.

Whittlesey wrote the books using records, but also interviews with surviving participants and witnesses, creating stories that sometimes haunted even him. Like the story of John Mark Williams who, during a snowstorm, fell into a 187-degree hot spring burning himself from feet to neck. He returned to camp his skin already shedding from his body. Friends sat with him through the night unable to help him while he remained awake until he died in their arms.

“That one stayed with me,” Whittlesey said.

All of the thermal deaths are intense not only because of the victim’s pain as they are boiled alive or their skin flakes away once they’ve been rescued, but also because of the helplessness of loved ones and bystanders as they watch their young children or family pet splash into a death that is neither instantaneous nor stoppable.

“There’s many ways to die in Yellowstone,” he said. “It’s not a sanitized city park. People think it’s like Disneyland and safe. But we have animals here that can eat you. People need to understand that.”

He isn’t trying to scare people away from the park. As a historian, Whittlesey sees his job as presenting the past in a factual manner. As a park employee, he hopes some of the stories prevent unnecessary deaths in the future. Chapters have names like “Human Deaths from Bears and How to Keep Them from Happening.”

Nor is Whittlesey advocating for additional safety regulations or rules. It’s the wildness that drew him to Yellowstone.

“We don’t want to sanitize these places,” he said. “That takes away the adventure, the fun.”

Other parks, such as Grand Canyon and Yosemite, now have their own versions of the book, inspired by Whittlesey’s first edition.

“But those parks do not have nearly as interesting ways to die,” Whittlesey said. “We have grizzly bears, boiling water and bison, as well as the drowning, falls and lightning.”

With all that, who needs ghost stories?

— “Peaks to Plains” is a blog focusing on Wyoming’s outdoors and communities. Kelsey Dayton is a freelancer and the editor of Outdoors Unlimited, the magazine of the Outdoor Writers Association of America. She has worked as a reporter for the Gillette News-Record, Jackson Hole News&Guide and the Casper Star Tribune. Contact Kelsey at kelsey.dayton@gmail.com. Follow her on twitter: @Kelsey_Dayton 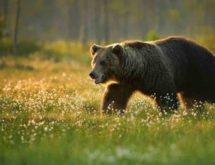 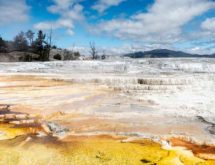 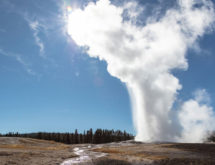