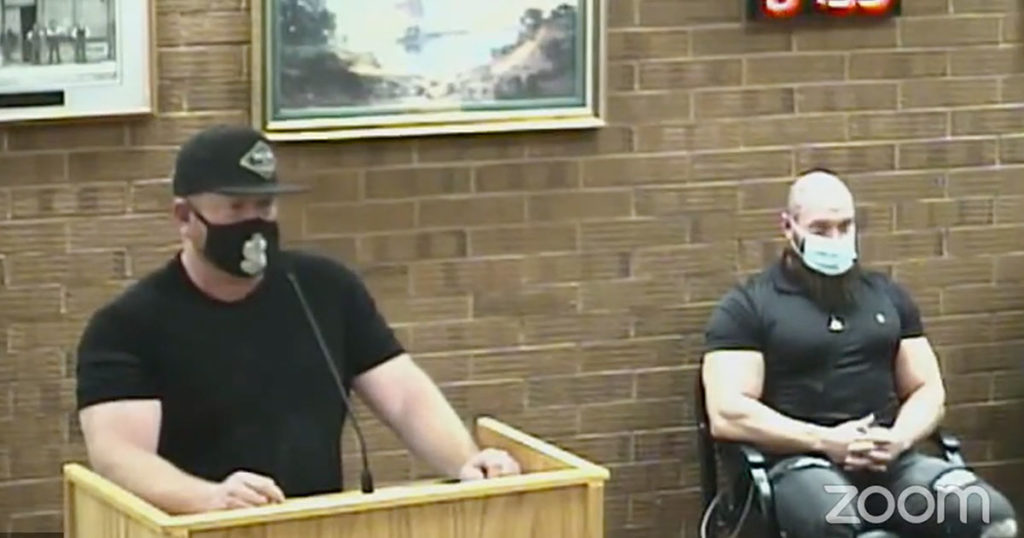 Thomas Eddy, owner of The Mast Lounge, addresses the Green River City Council about opening a strip club in the building.

GREEN RIVER — The Green River City Council heard from an upset business owner on Tuesday due to being unable to open The Mast Lounge as a strip club because of issues with the zoning district in which the establishment is located.

Thomas Eddy recently bought The Mast Lounge with the intention of opening it as a sexually-oriented venue.

However, businesses that are sexually oriented are considered a “non-conforming use,” in which the use for The Mast was terminated due to the business being discontinued for over 18 months.

A non-conforming use occurs when any property is used for a purpose that does not conform to the use regulations for the zoning district in which it is located, according to the city ordinance. The Mast is located on Flaming Gorge Drive next to restaurants, residences, the museum, and churches, which makes is a non-conforming use within that zone.

If active and continuous operation of a nonconforming use is discontinued for a period of 18 consecutive months, however, the structure loses its non-conforming use and can only be used for a conforming use, the ordinance explains.

Through a series of ownership issues with The Mast, as well as the need for building repairs, the establishment has not been in operation for nearly three years, according to Mark Westenskow, Green River Public Works Director.

Eddy argues, however, that the reason they couldn’t open within 18 months was because of repairs that had to be done on the building such as replacing the roof, and fixing a sewage issue in which the business next door’s sewage was filling the basement of The Mast. Additionally, he said the COVID-19 Coronavirus pandemic also set them back.

Eddy said there is clause in the non-conforming use ordinance that says time shall be allotted for any repairs that need to be done on the building.

Therefore, Eddy said the repairs and the pandemic should be taken into consideration when looking at timeline of this non-conforming use.

The Council, Mayor Pete Rust, and city staff all agreed that the 18 months passed and that the non-conforming use had been terminated.

Ken Yeager, Senior Building Inspector, said the business has not been open since April 2018, and it is still not open to this date, which is about 34 months of inactivity.

“The reasons why that’s been the case and the different people involved, we understand that it’s a lot of different moving parts there, but it’s clear that it’s not been in operation for over 18 months. In fact, it’s almost three years,” Westenskow said.

Mayor Rust said the non-conforming uses are fairly standard in every zoning law across the United States, and that this is not particular to Green River.

“These are a precious right and just have to be watched over, sought after, it has to be careful because, you lose them, they’re gone,” Zimmerman said.

Council Not Likely to Support a Strip Club

Westenskow said Eddy can open the business as a bar without the sexually-oriented business component, or he can apply for a special use permit for a non-conforming use. However, that process would go through the city’s planning and zoning commissioner and then the City Council would have the final say.

Councilman Gary Killpack made it very clear that he would not support a strip club.

“I will not support a strip club. Not in the city of Green River,” Killpack said.

Mayor Rust and Councilman George Jost agreed that the use is not deemed appropriate for that zoning district, and therefore they would not support a special use permit.

“It’s non-conforming and it’s been determined via non-conforming that it’s not an appropriate use in that zone, and I’m not going to change my vote regardless what method comes up,” Mayor Rust said.

Councilwoman Sherry Bushman and Councilman Zimmerman agreed that due to the legalities of the issue, they would not support it either. Zimmerman said that if it was a new business, this non-conforming use would not be allowed in this district.

Lawsuit Threatened Against the City

Jack Eddy, Rock Springs resident and Thomas’ dad, said that when he and his son viewed the building before buying it, the basement was dry. He believes the city of Green River cleaned out the sewage prior to showing the building.

“That should have never been sold that way,” Jack said.

Jack claimed that the city has “some liability” in this matter, and that they “need to realize that”. He said that his son never would have bought the building had there been “two feet of sewage” in the basement.

Jack added that his son has put hundreds of thousands of dollars into The Mast in hopes of opening it up as a “respectable gentlemen’s club”.

Councilman Killpack responded by saying, “to me, a strip club is not a respectable business.”

Thomas Eddy disagreed with Killpack, saying that strip clubs fall under arts and entertainment venues, which is the same type of venue bars are classified as.

“You want to look down on somebody and be judgmental, that just shows that you’re biased,” Eddy added.

Eddy threatened legal action against the city for their denial of a non-conforming use.

Mayor Rust once again told Eddy that he could open up a bar in the building because that is permitted in the zoning district, and that the city would be happy to work with him on that, but that a strip club would not be permitted.

“You cannot have a sexually oriented business, that’s the end of the conversation tonight,” Mayor Rust said.

Before leaving the meeting, Eddy asked for the city’s attorney’s information and for the meeting minutes to be provided to him when they are available.

The full conversation can be viewed on the City of Green River Youtube page.