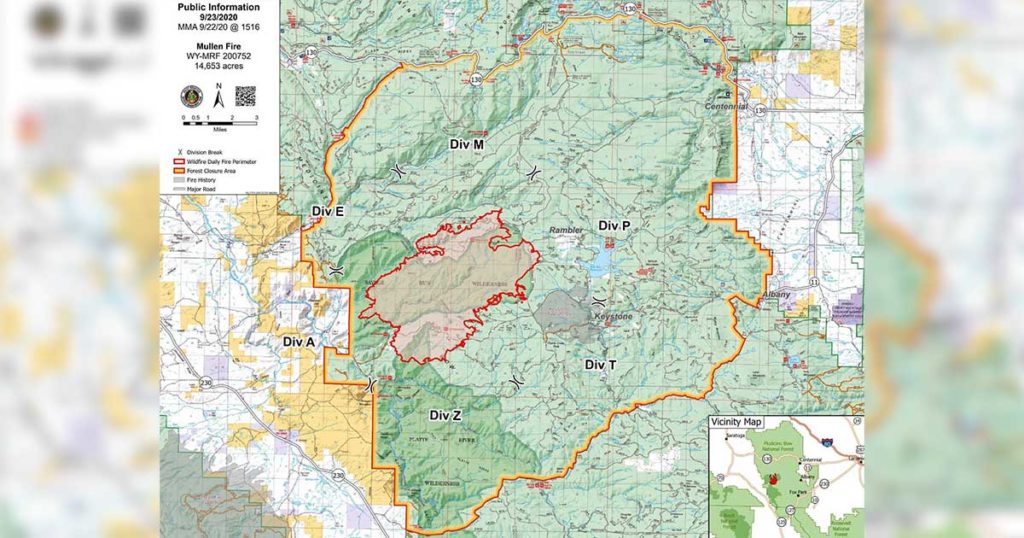 The Mullen Fire as of Wednesday at 10 am. Inciweb photo

The fire was first reported in the Savage Run Wilderness on Thursday, September 17, and spread rapidly in extremely rugged terrain, with dense vegetation and beetle-killed deadfall.

As of Tuesday, aircraft continues to be critical to the Mullen Fire suppression effort. Yesterday, helicopters delivered more than 22,000 gallons of water that supported the work of firefighters on the ground by cooling the fire’s edge and slowing its rate of spread. Fixed wing aircraft, including CL-415 scoopers and smaller scooping aircraft, fire bosses, were also used on the east side of the fire in the Rambler area.

There are currently 185 personnel reported to be working on scene.

Fire managers have assigned personnel and other resources to focus on values at risk, such as evacuated communities of Rambler, Keystone communities, Lake Creek, the Rob Roy Reservoir area and the City of Cheyenne water supply. The Structure Protection Group is in each community, clearing brush and installing sprinkler systems to prepare structures for possible fire progression to those areas.

Engines and hand crews are working on the western edge to secure the fire perimeter to prevent spread to the west onto private property.

In other areas, fire managers are scouting the terrain for opportunities where firefighters can be successful in slowing fire progression.

Dry dead and down fuels, low humidity, and gusty winds have contributed to active fire behavior, even throughout the night. Later this week, fire weather is expected to become critical, with strong west and southwest winds, very low humidity, and above-normal temperatures.