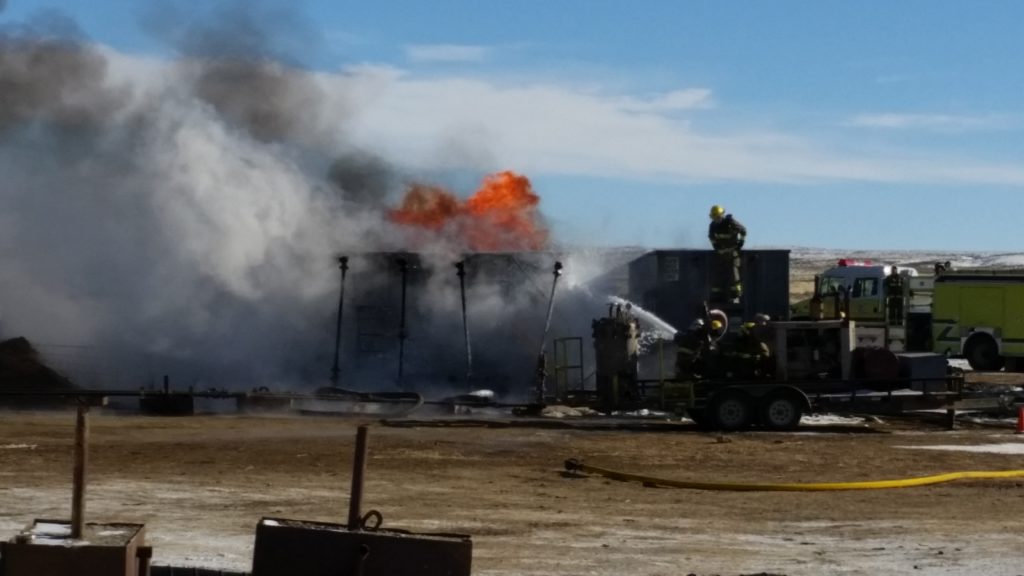 The smoke was very visible from Interstate 80 and was carried far to the northeast by light winds. The 2 tanks involved contained about 2,400 gallons of various liquid byproduct that were being pumped into them from a well site. The tanks each hold about 500 barrels (4,200 gallons) of flammable liquid when full but these were not full at the time of the blaze.

According to Mike Bournazian, the Sweetwater County Fire Warden, the blaze took about 3 hours to snuff out by applying a heavy thick blanket of Class B foam that is used to smother liquid fuel fires.

Due to the large rapid response of the joining agencies and calm winds, the firefighters were able to systematically apply a thick layer of foam using large amounts of water that had to be shuttled out to the site by 4 fire department water tenders.

The foam is then injected into the water discharge of the fire engines and mixes to make what looks like a large bubble bath that separates the air (oxygen that is required to allow a fire to burn) and the fuel causing the fire to go out.

The fire crews then cooled the tanks and, with the sub-freezing temperatures, were able to cool the fuel with water and keep the fire from reigniting. Bournazian said that there were multiple fire engines and water tenders along with 23 personnel from the three fire departments.

The cause of the fire is under investigation and there were no injuries to anyone. The damage to the tanks is estimated at about $75,000.

WAMSUTTER — Multiple agencies are responding to a confirmed report of two barrel tanks on fire 20 miles northeast of Wamsutter. The energy industry tanks are believed to hold around 500 barrels each.

Updates as we get them.