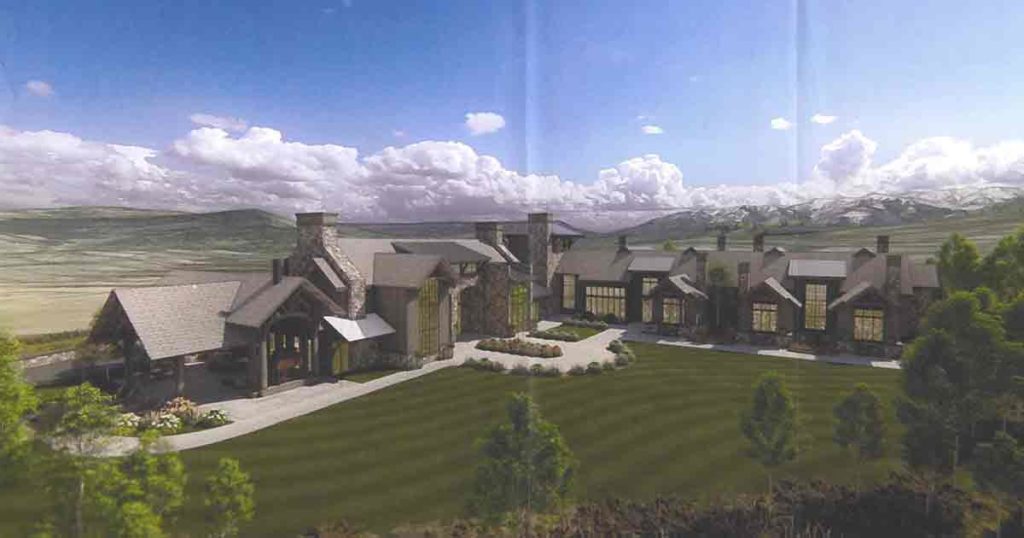 Here is a rendering of what the Jackson Fork Resort will look like when completed.

SUBLETTE COUNTY — A Bondurant billionaire is seeking a zoning change to allow him to move forward with developing and constructing a resort in the Upper Hoback River area.

During the Sublette County Commission meeting on Tuesday, December 7, the Commissioners will review a zoning request change from TD Ameritrade founder and part owner of the Chicago Cubs Joe Ricketts, who would like to build a resort called Jackson Fork Ranch Resort and Cabins. While the Commission’s meeting starts at 9 a.m., this item will be discussed at 1 p.m. at the Pinedale Library Lovatt Room at 155 S Tyler Ave. in Pinedale.

According to Exhibit B in the Change of Zoning District Boundary Application, the applicant is requesting 56 acres of Agricultural 1 to be rezoned to Recreational Service 1. This will allow for the construction of a 15-20 room resort and guest cabins, which will be constructed in two phases.

“Both phases will be constructed with little to no viewspace impact on the bench above the Upper Hoback County Road,” Exhibit B states.

Phase 1 will employ around 18 employees, after phase two is complete, an additional 15 employees will be hired.

“The project will be planned, built, and managed to embrace and sustain the surrounding landscapes’ natural beauty, wildlife, and water while expanding recreation and hospitality jobs and revenue in the county,” according to Exhibit B.

To review the entire application, see the document below.

However, despite the project proposal stating it will not negatively impact the area, it has been met with opposition. During the Sublette County Planning and Zoning Commission meeting numerous residents spoke against the project. After listening to residents, the commission voted 3-2 to deny recommending the zoning change.

In a lengthy letter Bondurant resident and Kiesha’s Preserve founder John Carter asks the Sublette County Commissioners to deny the zoning change. Kiesha’s Preserve is in southeastern Idaho, but Carter is in the process of expanding it into Wyoming.

“In 2019, following the Roosevelt Fire, my family and I surveyed possible areas to expand Kiesha’s Preserve into Wyoming. We settled on parcels in the Hoback Ranches area. We are engaged in restoring habitat and plan to place these parcels into a conservation easement to protect the habitat,” the letter states.

Carter claims approving this zoning “would result in impacts that are incompatible with the values contained in the County vision and regulatory intent.” He said Ricketts has his own conservation foundation called Rickett’s Conservation Foundation and he is encouraging Ricketts to use this land in that effort.

“Given the high value wildlife habitat occurring in the project area, it would seem the proposed resort conflicts with the values of the Rickett’s Conservation Foundation,” Carter claims.

Carter is not only concerned with potential air-quality impacts, increased traffic and noise, but with the potential for wildlife migration corridors being interrupted. Some of the animals that could be negatively impacted by the construction of the resort include, elk, mule deer, pronghorn antelope, moose, sage grouse, grizzly bear and lynx. According to Carter, all of these animals are dependent on the land around this area.

To review the entire letter from John Carter, Jason Christensen and Kandis Christensen, see the document below.