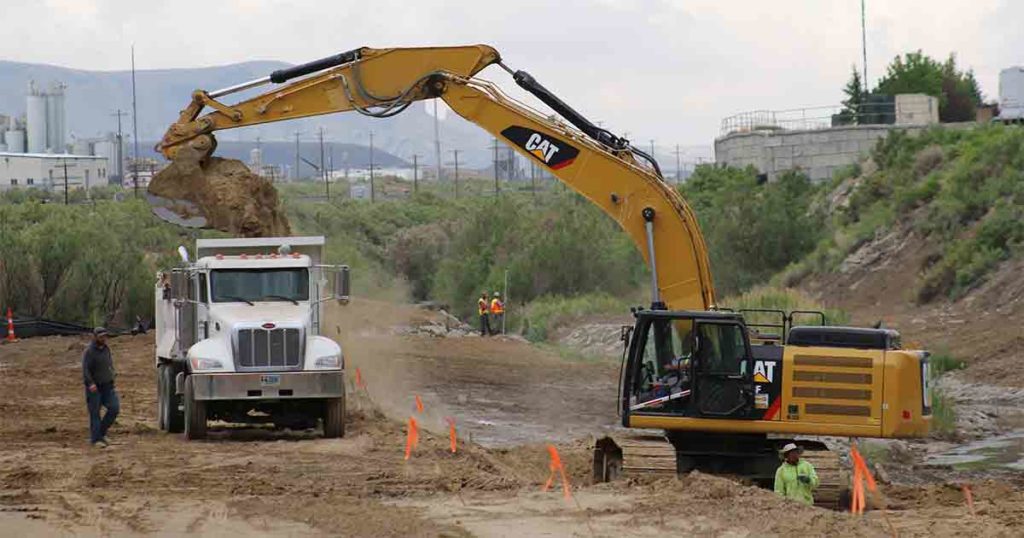 After a long wait, construction has already started on Phase 1 of the Bitter Creek Reclamation Project. SweetwaterNOW photo by Stephanie Thompson

ROCK SPRINGS — The City of Rock Springs has waited for almost two decades to secure funding and start Phase 1 of the Bitter Creek Reclamation Project. The wait is finally over as construction is well underway, at least for this portion of the project.

With all of the most recent conversations about how to pay for the project, the bidding process, and everything else that has come up, we thought it might be a good idea to reach out to City of Rock Springs representatives and focus on the actual project, how long it took to get here, and where the funding is coming from to pay for Phase 1 of the project.

Ryan Schmidt, City of Rock Springs engineer, said he has personally been working on the project for the last two years, but knows it’s been a project in the making for years.

“We began this idea of reconstructing the Bitter Creek back in 2004 in order to alleviate the flooding issues and flood insurance requirement through our downtown,” Rock Springs Mayor Tim Kaumo said.   “We’ve been working to obtain funding for 17 years and we still continue to search for funding for the remaining three phases of the project.”

The current phase of the Bitter Creek restoration is partially funded through a grant from the Abandoned Mine Land (AML) Reclamation division of the State of Wyoming Department of Environmental Quality, according to Matt McBurnett Director of Administrative Services.

These are federal pass-through funds from the Department of the Interior and the amount of this grant is $3,836,136. The city was also allowed to allocate $91,137.32 from a different AML grant for this phase of the project, McBurnett said.

The total budget for this phase of the project is $5,441,805.86. The portion of this project funded locally is $1,514,532.54, which was money earmarked from excess tax collections from the 2013 specific purpose tax ballot, according to McBurnett.

Obtaining the funding for segment one of the project was quite a task and was something the city worked on for years.

The city wrote the grant for the Phase I portion of the four-phase project. Then, a small team of city employees and legislators lobbied on its behalf through the Wyoming Business Council and the State Lands Investment Board (SLIB), Kaumo said.

“This has been a very long road that we need to continue,” Kaumo said. “The funding through the AML process is no longer an option so we need community support on completing this project.”

The funding for the other three phases could come through a specific purpose tax, American Recovery Act funding or other funds the city can find, he said.

Schmidt said during Phase 1 of the project, 2,500 feet of the channel will be restored. This portion, which extends from the South Belt Route bridge and 2,500 feet west of the bridge, is basically the behind the Plaza Mall and other businesses near the Bitter Creek. The channel will be widened and improvements will be made to the channel to help with future floods and erosion.

About 300 feet of Phase 2 will be completed in this portion of the project because of the location of the bridge. They wanted to complete all of the work around the bridge at the same time. Any areas that are disturbed during the project will be revegetated when the work is finished. The project is expected to be completed by December 31, 2021.

While city official are excited that Phase 1 of the project is taking place, they know the importance of continuing the funding pursuit to complete the other three phases.

“Phase 1 is just the beginning, it will take the completion of all four phases in order for the city to benefit,” Kaumo said.

Due to the cost of the project, the city decided to divide it into four segments. When all four segments of the project are finished, it will remove quite a few properties from being classified in a “flood plain.” This includes both residential and commercial properties, Schmidt said.

When all four phases have been completed, the land adjacent to the creek, which encompasses the vast majority of our downtown area, can be removed from the flood plain and it removes the possibilities of flood damage along this route, Kaumo said.

“Once the channel is reconstructed, the flood boundary will be relocated just up to the banks of the channel themselves and allow development and the requirement for flood insurance to be removed,” Kaumo said.

Since the area is in a flood plain, the businesses and residential homes in that location pay for flood-plain insurance.

“The expense in building within the floodway and flood plain tends to chase developers away from taking on the additional expense of construction and flood insurance,” Kaumo said. “The city has seen a few flood events which have flooded our downtown areas, these are mostly related to the Deadhorse Channel and the Killpecker Drainage, which both confluence with the Bitter Creek.”

Many thousands of dollars in damages have been left for business owners and the city to deal with after the floods occur. Once all four phases are completed, this should be eliminated. Kaumo said this could open up some areas to future development.

The Walking and Biking Path

While the city is fixing the floodways, it would also like to create a walking and biking path for residents to use along the Bitter Creek.

Eventually, the walking and biking path will connect the east end to the west end of town. It would also provide access to several existing and proposed greenbelts and parks along the way.

“My goal would be to eventually extend the bike path to Point of Rocks and to Green River basically following the Bitter Creek Channel,” Kaumo said.

With all of this in mind, the city will continue its long pursuit in securing funding to complete all four phases.