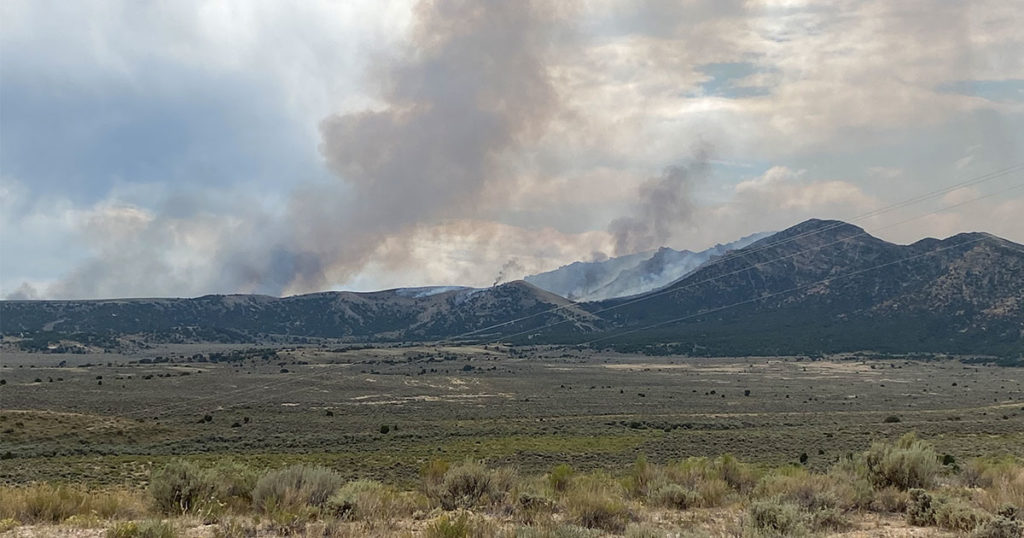 Bournazian said the Sweetwater County Fire Department responded to 100 calls in 2020, 50 of which were wildland fires.

The largest fire the department worked on was the Richard Mountain Fire, which was a lightning-caused fire that burned into Utah. The Sweetwater County Fire Department worked on this fire for about five to seven days. While lightning is the biggest threat for fires in the county, Bournazian said human-caused fires went up this year in Sweetwater County.

According to Bournazian, 2020 was a record year for wildland fires across the western United States with 10 million acres being burned. For the past 10 years, the average was seven million acres, with 4,500 less fires.

So far, this winter has been very dry with half of the county experiencing an “extreme drought,” Bournazian said. Due to this, he said the 2021 fire season could be really bad unless the spring brings a lot of moisture.

He explained that “fire season” is no longer just a season. The department is responding to fires from spring through the fall until snow starts falling. Every month but January has had a wildland fire, according to Bournazian, and 25,000 acres have burned in Sweetwater County in the last five years.

“Where in an area where the trend is going up,” he said.

Bournazian said it is very important that the County maintain their mutual-aid agreements with other fire agencies, as they all pull together to help respond to fires.

Bournazian requested to hire 14 seasonal firefighters for the upcoming fire season, which brought forth some budget concerns.

He said there is a lot of competition so they are trying to start the hiring process in March. The request for the firefighters is the same as last year, except the cost is about $2,000 less this year. Bournazian requested two nine-month hires, eight six-month hires, and four three-month hires for a total of about $254,000.

“It’s our workforce, it’s really our core,” Bournazian said of the seasonal staff.

Commissioner Lauren Schoenfeld said she looked up the number of fires and the number of seasonal staff since fiscal year 2015-2016 and found that with fewer and similar numbers of fires, the department worked with five and eight seasonal firefighters. In 2019-2020 Bournazian requested 14 firefighters for the first time. Schoenfeld asked if it was possible to go back to fewer seasonal positions.

“We are looking at cutting these numbers back for every department and in looking at the number of fires and the positions and the salaries, that makes sense to me,” Schoenfeld said.

Bournazian said in past years the department ended up overworking staff.

“We burned them out,” he said. “It takes more than two people on a brush truck to fight a wildland fire safely. We can’t have those kinds of practices anymore.”

He added that if he was staffing to their true needs, he would need 18 seasonal firefighters with four full-time staff. With 14 hires, however, he said they can stagger shifts and rest them.

Commissioner Roy Lloyd also expressed concerns with approving the request as Donna Lee Boback, Clerk of District Court, recently asked for another employee in her office and the Commissioners denied the request. District Court used to have eight employees, and they currently have six.

“I worry a little bit about confirming and saying I’m willing to go with 14 employees at this point, based upon the fact of the answer we gave her, but also until we know our budget a little bit better,” Lloyd said.

He added that the county is currently looking at a $15 million deficit in the budget and he doesn’t want to layoff other county staff.

Bournazian said figuring out how to staff his department has been a work in progress and that 14 is the minimum they can work with. With only six volunteers currently, seasonal staff makes up the bulk of the force.

“Honestly, I cannot work with less than this,” Bournazian said. “I can’t, I’ve tried.”

Commissioner Mary Thoman asked if they can work more with other agencies to help fill in when they do not have enough staff, but Bournazian said they already do that with their mutual-aid agreements.

We’ve got 6,000 square miles of unincorporated area in the county and this is the workforce that it takes to do the job safely. I won’t go back to the way we used to do things because it’s not safe. I won’t be accountable for that.

Commissioner Jeff Smith said he was willing to approve the request as is. Chairman Randy “Doc” Wendling said he is aware the Commissioners are looking at money, but it is also important to consider public safety. He asked Bournazian if cutting the number of seasonal staff would jeopardize public safety, to which Bournazian said it would because they would not be able to respond to as many fires.

“This is truly the minimum,” Bournazian said.

Bournazian said he could cut capital and operational costs, but he needs 14 minimum seasonal staff.

Commissioner Thoman said with the severe drought currently impacting the county, she sees the request as a safety need. Commissioner Lloyd said he was still concerned about laying people off, but Wendling said he was in favor of ensuring public safety.

“I’m very, very OK with reducing staff in the courthouse for the safety of meeting minimum needs of public safety,” Wendling said.

The request was approved 3-2 with Chairman Wendling and Commissioners Thoman and Smith voting in favor of the request, while Commissioners Lloyd and Schoenfeld voted against it.