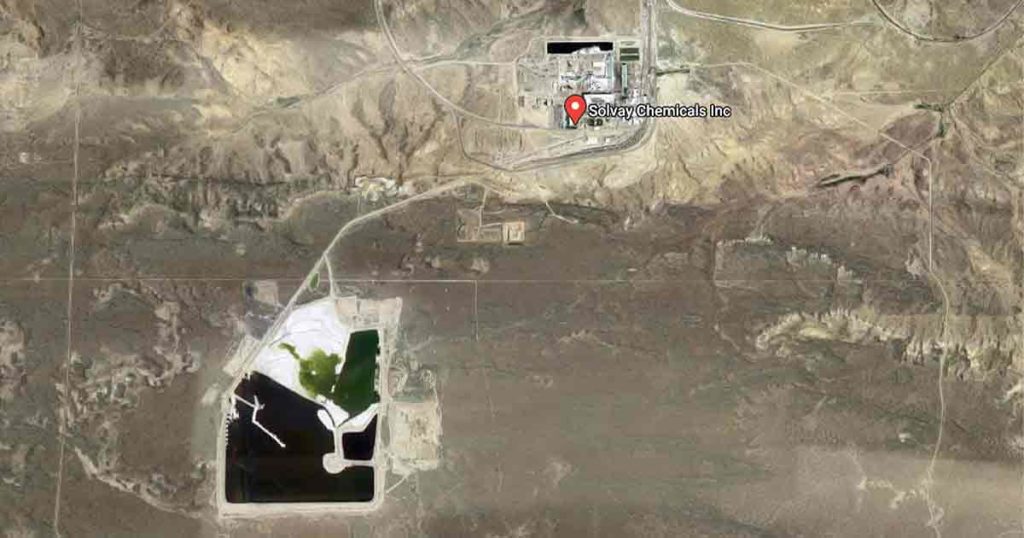 GREEN RIVER — The Wyoming Department of Environmental Quality (DEQ) is investigating a containment pond breach that took place at Solvay Chemicals Inc., located west of Green River, Wyoming, during a late-summer snow storm that hit the area in September.

Dana Ponciroli, Solvay Chemicals Head of North America Communications, told SweetwaterNOW that Solvay was impacted by the “highly-unusual winter storm” that struck on September 8 and 9.

“As a result of the power disruption combined with the rapid snow melt, on September 9, for the first time in the history of the plant, the fluid began to exceed the available capacity in the containment pond, resulting in the overtopping of the dam embankment,” Ponciroli said. “Under normal circumstances, all of the fluid that goes into the pond is either evaporated or brought back into the plant.”

The pond is located on a Bureau of Land Management (BLM) easement leased by the company. According to BLM Rock Springs Field Office Manager Kimberlee Foster, the overflow reached an unnamed tributary and eventually made its way to a confluence of the Meadow Spring Wash.

Both Solvay and the DEQ were asked about the size of the containment pond and how much substance spilled out of it, however, clarification wasn’t given.

Foster said the water breached midway through the storm carrying with it heavy salts from the pond, but no hazardous materials.

Eventually everything flows downstream, but it appears the debris stopped at Meadow Springs.

Solvay immediately called DEQ and the BLM and started mitigation of the breach using “sand dams,” according to Foster. DEQ employees made it to the breach location that same day, and the breach was contained by September 10.

“I will say, Solvay was on top of it in the sense of that they got a hold of us right away. We were able to have staff go out there and and do some initial investigation,” said Guille.

Ponciroli said once the overflow was discovered, Solvay began performing earthwork to protect the integrity of the impoundment, contain as much fluid as possible, and mitigate any potential off-site impacts.

“Obviously, there were some other issues. My understanding is that I believe the power was also out to that facility or to that area due the snowstorm,” Guille said. “I don’t know the timing of that and what that would have meant for trying to handle this.”

Guille says regardless of the circumstances, a review of what happened is taking place.

“We are, as a department, still investigating,” Guille said.

During the ongoing investigation, Guille said DEQ learned Solvay did not have a discharge permit for the containment pond. He said the DEQ can provide discharge permits and those permits require companies to meet certain water quality standards of the stream the discharge would drain into and water samples from the drainage is tested and monitored.

They didn’t have a permit. So, we are obviously looking towards enforcement action.

Guille said his agency doesn’t write tickets because it doesn’t have that jurisdiction. However, if there is a violation, they need to come to a settlement agreement with the violator. This is usually in the form of a financial penalty. The agreement may also require a company to take additional steps to ensure something like this doesn’t happen again.

Foster said mediation will likely be needed, but might not happen until the spring as winter begins. She said it’s unlikely that any soil will be removed, but that will be determined once the DEQ wraps up its investigation.

“Solvay takes its environmental responsibility and the safety of its employees and communities in which we operate very seriously,” Ponciroli said.

We continue to work cooperatively with the Wyoming DEQ and the BLM to complete the investigation and identify the proper engineering and operational modifications to prevent this from occurring in the future under similar or other unique circumstances.