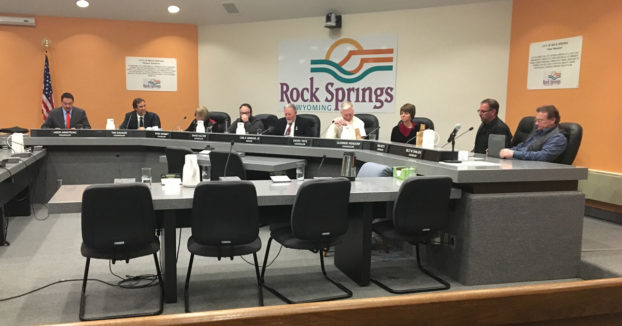 Sweetwater County Attorney Daniel Erramouspe has completed an investigation into an alleged violation of Wyoming Campaign Finance Law, [filed by current and former members of the Rock Springs City Council against the unnamed authors, who were found to be employees of the City of Rock Springs.]

The letter in question, appeared to be an opinion letter in response to a letter written by Bruce Pivic, [owner of Wyo4News]. Pivic’s letter appeared to be critical of mayoral candidate Tim Kaumo and the response letter was in support of Kaumo. The complaint alleged that the authors of the letter should have either listed their names or have been a registered political action committee (PAC).  Instead, the published letter contained the following line: “Paid for by a group of employees of the city of Rock Springs.”

Through the investigation, it was determined that SweetwaterNOW had a campaign advertising policy of deeming every campaign article an advertisement, and therefore charged a fee to publish.  Regardless of whether the article was an opinion piece, endorsement letter, or cycled ad, SweetwaterNOW treated it as advertising.  This policy was distinct to SweetwaterNOW as other media outlets did not follow the same guideline.  Therefore, when the “employees of the city of Rock Springs” paid SweetwaterNOW to publish the opinion letter refuting the piece in Wyo4news and supporting mayoral candidate Kaumo, they essentially contributed anonymously to his campaign.  This was a violation of Wyoming Campaign Finance Law, Wyoming Statute §22-25-110.

Assisted by the cooperation of Gary Collins of SweetwaterNOW, one of the authors of the letter was contacted by the Sweetwater County Attorney’s Office and interviewed.  Through the interview, it was learned those employees behind the letter were unaware that their actions constituted a violation of campaign finance laws.  Their intention was to write an opinion piece, and they were unaware that paying to have that document published was essentially contributing to a campaign.  They admitted that they were not a PAC, nor did they publish their respective names.

“I felt that it was clear that no one intended to violate campaign finance laws.  Had the parties been aware of the specific law, or not been charged a fee, then a violation would not have occurred,” Erramouspe said.

The list of “employees of the city of Rock Springs” are listed below: