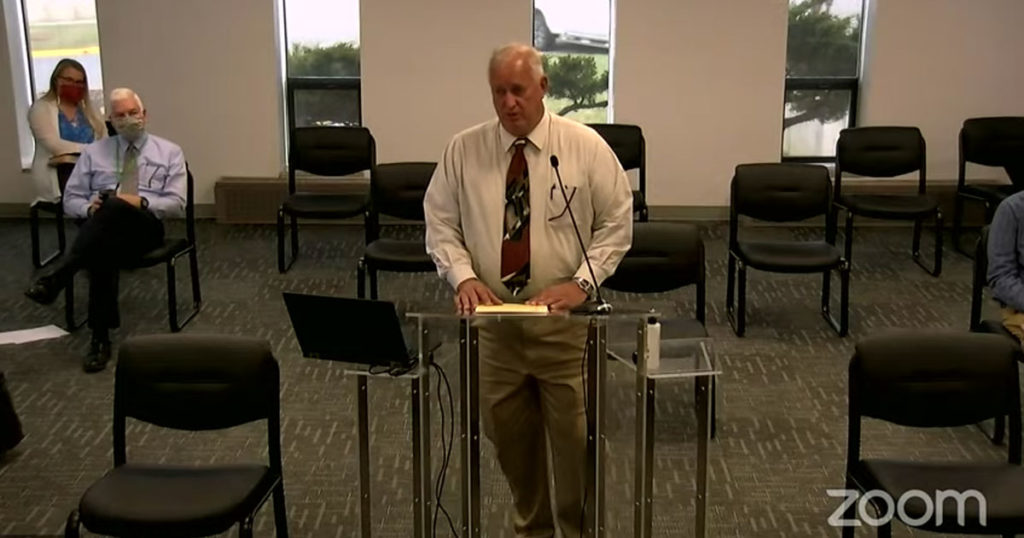 SWEETWATER COUNTY — The Sweetwater County Commission discussed the Fiscal Year 2022 budget during its meeting Tuesday morning, which is currently facing a $13.5 million deficit.

Current county reserves are at about $34 million and the Commission decided today they would like to keep that amount at about $25 million in the upcoming fiscal year. Robb Slaughter, Sweetwater County Treasurer, said was recommending keeping reserves at about $22 million.

Slaughter said the County is going to be receiving about $8.2 million from the federal government as part of the American Rescue Plan Act over the next two years. Within about 60 days, the County will receive the first half of the funding and will receive the second half a year later.

He said some of those funds can be used to help offset some of the human service agencies and component units the county helps fund and allow for those budgets to be weaned over the next couple years. However, he and Chairman Randy Wendling pointed out these funds are temporary and the $13.5 million deficit will be continuing past this fiscal year.

“We still have to deal with that wide gap of revenue versus expenditures,” Wendling said.

Slaughter said the temporary funds can be used to help fund agencies as they figure out places they can make cuts moving into the future when these funds are no longer available.

“The ultimate goal in this is to decrease our expenditures, and we have to do that over time,” Slaughter said. “But as I said, I think using some of this money in the interim while we’re looking at doing that, it would give the commission time to talk with some of these boards and agencies.”

The county has historically relied on mineral valuations to cushion the budget, but those valuations have been declining.

Slaughter said that though valuations are not where they used to be, over the last four months there has been increased pricing in oil and gas, and trona production is up. However, he said the key is the pricing of trona, which has not increased yet.

However, valuations have been dropping for a few years now, and even if or when pricing increases, expenditures will continue to outpace the county’s revenues, according to Slaughter.

“It would take a $1.1 billion increase in our valuation to get our revenues back in line with where our expenditures are,” Slaughter said. “Are we going to see that in the near future? No, we’re not.”

Commissioner Roy Lloyd said he would like to start looking at the budget as a two to three-year cycle so the outside agencies as well as county departments can project their budgets ahead of time and better plan for the future.

He added that he would like to keep the reserves at about $25 million at the least because although the valuations have better projections in the future, he said they never know what can happen. Lloyd said if they get below $20 million in reserves, it doesn’t take long to find themselves in a “bad spot”.

“Between 2015 and today, our taxable revenue is down a billion dollars. When you stop to think about it, that’s huge,” Lloyd said.

Though Commissioner Jeff Smith said he would be comfortable with keeping reserves at $20 million, the rest of the Commission agreed with Lloyd, preferring keeping the balance at $25 million.

Chairman Wendling pointed out that if they can keep the reserves higher, they will. This amount is simply the lowest they will allow the balance to be at.

“That does not mean we spend our reserves down to that, that just means we’re going to hold ourselves to $25 million,” he said.

Slaughter said to maintain $25 million in the reserves, and to balance the $13.5 million deficit, the county needs to look at a 15 percent decrease in funding from FY2021, which equates about $8.2 million in cuts from last year’s budget.

He is predicting about a $1.5 million carryover. With this carryover and with decreasing the budget by $8.2 million, about $4.1 million from reserves will go to funding the deficit. This will take the reserve balance to about $30 million.

Wendling said that instead of tasking each county agency and component unit with cutting their budget by 15 percent from their FY2021 budgets, they will handle it by a case-by-case basis. Some agencies may be asked to cut 20 percent or more, as some agencies will struggle to cut anything out of their budgets without it impacting personnel.

The commissioners agreed that working with agencies individually rather than making across the board cuts is the best way to handle the budgeting process.