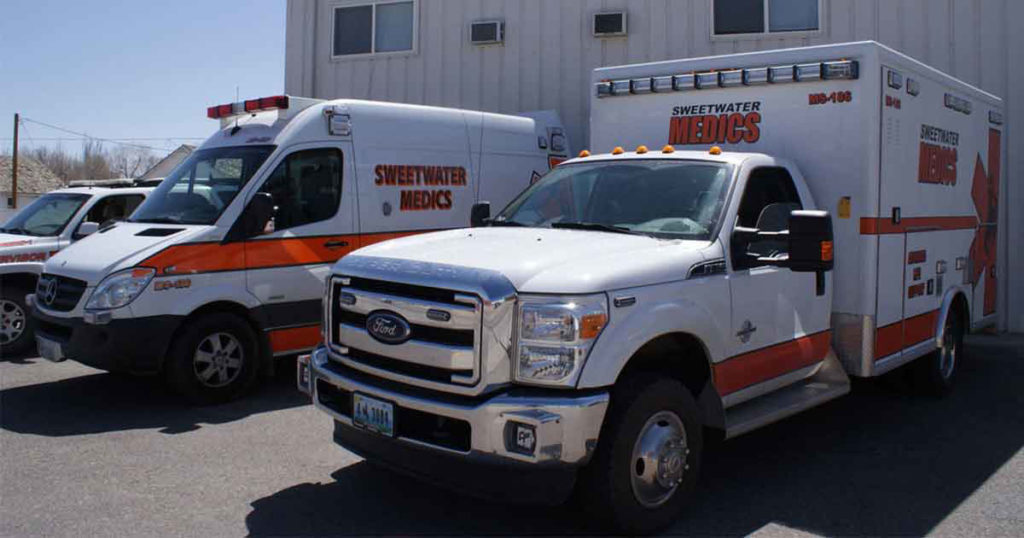 SWEETWATER COUNTY — Ambulance service funding in Sweetwater County has become difficult, and if Rock Springs and Green River do not start chipping in, Sweetwater Medics will no longer respond to 911 calls by the end of the month.

The Sweetwater County Commissioners announced in December 2020 they would no longer be able to fund ambulance services without help from the cities. The Commissioners said they are terminating the current service contracts and all associated funding with Sweetwater Medics and Castle Rock Ambulance Service on March 31, 2021.

In January, the Commissioners met with the cities and towns in Sweetwater County and established a committee to explore solutions for funding ambulance services. Commissioner Jeff Smith said that committee is hard at work, but a longterm solution has still not been found at this point.

With the impending termination of the contracts, the Commissioners have drafted a letter to the City of Rock Springs and the City of Green River to ask for their help in funding these services. Smith announced that if the cities do not approve to help cover the funding of ambulance services, Sweetwater Medics will stop responding to 911 calls starting April 1, 2021.

“The current contract to provide ambulance service will expire March 31. Without continued funding, Sweetwater Medics will not respond to 911 calls starting April 1. The county understands the current financial environment and is mindful of the limits of this request during a current budget year,” Smith read from the letter. “If the cities agree to participate in funding in the new budget year beginning July 1, 2021, the county will continue to fund both Sweetwater Medics and Castle Rock Ambulance Services through June 30, 2021 as a gesture of good will and to show willingness to cooperate going forward.”

In other words, the County will fund both Sweetwater Medics and Castle Rock through the end of the current fiscal year to allow the cities to find funding sources for the upcoming fiscal year, according to Smith.

“This will allow for the development for a long term solution without an interruption of ambulance service and will allow the cities time to budget for these new expenses,” Smith said.

“If there’s not an agreement to go forward with funding in July, there’s no reason to prolong the agony, we’ll just end it on March 31,” Smith said.

The 2021 budget request for ambulance services is over $1.2 million. Up until this point, the County has funded this at 100 percent, Smith said.

According to Smith, the County currently pays Sweetwater Medics $77,000 per month, and Castle Rock $348,000 annually.

The Commissioners discussed the letters for each city in executive session, as Commissioner Roy Lloyd expressed concerns with leaving residents without ambulance services.

“I stand strong that we should not have to shoulder the burden of this entire contract but I also have concern that we may have to look at moves. Otherwise we won’t have ambulance services, whether it’s our responsibility or not, for an entire city.”

However, all five commissioners approved the letters and they will be presented to the City Councils Tuesday night. Commissioners Smith, Lloyd, Lauren Schoenfeld, and Chairman Randy Wendling signed the letters, while Commissioner Mary Thoman has not signed them as she had to leave the meeting before she could sign them. The letters can be found below: