LARAMIE – The Wyoming tennis team (16-3, 4-0 MW) won its seventh-straight match with a tough 5-2 victory against the Air Force Falcons (16-8 overall, 2-2 MW) on Saturday afternoon. With 16 victories on the season, it’s the most wins in a single-season in program history. The Cowgirls are now 9-0 on the year at home.

“We obviously haven’t lost the doubles point in a while, so it was a little different feel in the locker room in between,” head coach Dean Clower said. “The good thing was that ladies put the doubles loss on themselves, took responsibility and said that we’re going to get it done. It was all on them how they came out with that fire. The upperclassmen really showed their leadership, took care of business and executed the game plan. It was very much a team effort.”

The two teams battled in doubles action with Air Force coming away with two wins to go up early in the match. The number two team of Dorottya Jonas and Ana Tkachenko won the first two games against Chloe Forlini and Jocelle Rudico but the pair dropped the next six of seven to fall 6-3, but the Cowgirls answered with a 6-2 win by Elisa Koonik and Tessa van Der Ploeg against Elizabeth Barnickel and TJ Fumagalli. It came down to the team of Magdalena Stencel and Milka Genkova against Lily Forlini and Nadeen Lieberman. UW went up 2-0, which was answered with the Falcons winning the next five of six to go up 5-3. The Cowgirls won the next game, but would fall 6-4.

“We’ve been talking about Air Force all season and how good they’ve been. They are very well disciplined, well-coached and deeper than previous years. They added TJ (Fumagalli) to the line-up, who is a talented recruit, plus a solid senior at one (Chloe Forlini), so we knew that this was going to be a battle. Good job for our team to come off a tough match against New Mexico and bring it today as well.”

The Cowgirls had to earn the win the hard way by winning five out of six in singles action. Koonik got the Cowgirls on the board first with her quick work of Lieberman, 6-1, 6-1, followed by Stencel at the number one spot over Chloe Forlini, 6-3, 6-2. van Der Ploeg beat Barnickel in straight sets, 6-3, 6-3. For the second straight match, Tkachenko clinched the match for Wyoming with a 6-2, 6-1 victory against Rudico, while Genkova defeated Lily Forlini, 6-1, 6-2. In the teams’ only loss of the day, Jonas battled Fumagalli at the number two spot. Air Force took the first set 7-5, which was answered with UW winning the next six games to take the second, 6-0. The Falcons won five out of eight games to go ahead 5-3. Jonas battled back on the next game, but didn’t have enough in the tank falling 6-4 in the third set.

Wyoming will host its season finale next Saturday against the Colorado State Rams. The match is set 1 p.m. MT at the UW Indoor Tennis Courts. It will be senior day for Dorottya Jonas and Miranda Talbert.

“We’ve talked all year about how deep our line-up is. We can win at any spot and it’s nice to have freshman be able to clinch for us, but kudos to Ana (Tkachenko) and all of the other players that bring it every day,” head coach Dean Clower said. “We had some people drop matches but they still brought it. This New Mexico team was hot coming in to the match today and have beat some tough teams in the conference. There are a few seniors on this team that beat us in the championship two years ago and our players remember that. It was a great win at home and hope it leads us into a tough match against Air Force tomorrow.”

The two teams battled in doubles action with UW coming away with two wins to go up early in the match. The number two team of Dorottya Jonas and Ana Tkachenko lost to Emily Olivier and Diana Wong 6-4, but the Cowgirls answered with a 6-4 win by Magdalena Stencel and Milka Genkova over Ludivine Burguiere and Cassie Chung. It came down to the team of Elisa Koonik and Tessa van Der Ploeg against Dominique Dulski and Rachana Bhat. UW went up and took an early 4-1 lead. The Lobos responded by winning the next four of five to tie it up at five all. Each won its next games on serve, but Wyoming came out on top in the tiebreaker to win the match, 7-6 (7-4).

With the all even at three in the third, the Lobos won the next two games to go up 5-3. Unfortunately, Stencel couldn’t come back losing the final two of three games and the set, 6-4. The match came down to a pair of freshmen at the fifth and sixth positions. Tkachenko cruised in her win over Chung, 6-1, 6-2, to clinch the winning point for the Cowgirls. Genkova dropped her first set 7-5 against Bhat but didn’t finish the match. 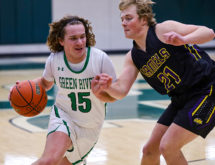