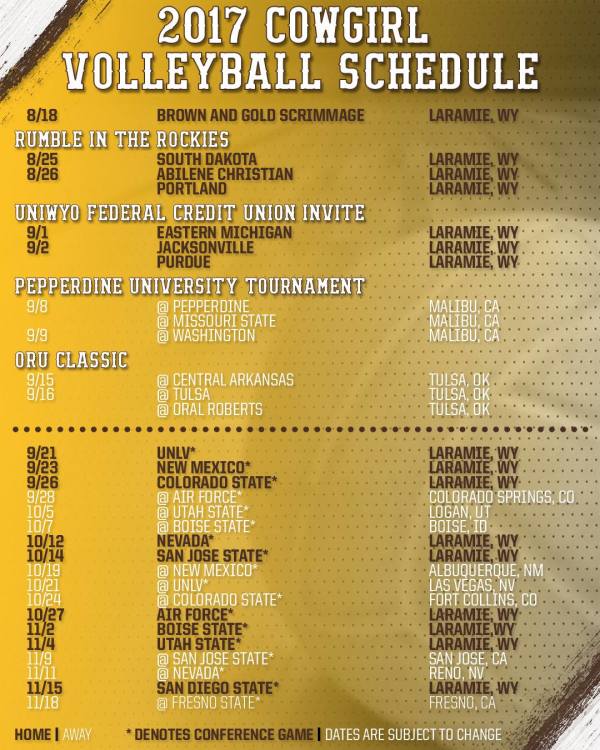 LARAMIE – Wyoming volleyball head coach Chad Callihan, who will be entering his fifth season at UW, announced the Cowgirls 2017 schedule on Tuesday. Wyoming will once again compete against five teams that qualified for the NCAA Tournament a season ago.

The Cowgirls will play 15 matches inside the friendly confines of the UniWyo Sports Complex, including nine Mountain West matches. Additionally, UW will host two non-conference tournaments, the Rumble in the Rockies (Aug. 25-26) and UniWyo Invite (Sept. 1-2).

The Brown and Gold Scrimmage is set to take place on August 18 at 6:30 p.m. MT. It will be free and open to the public. Wyoming will then begin its 2017 campaign by welcoming Abilene Christian, Portland and South Dakota to Laramie for the Rumble in the Rockies non-conference tournament.

Portland is coming off its most successful season as a Division I institution. The Pilots went 17-13 a year ago. The 17 wins were the most wins in a season for the program since 1986. Abilene Christian is led by first-year head coach Angela Mooney and closed out last season with a 12-19 overall record, in addition to third-place in the Southland Conference with an 11-5 mark. South Dakota will make its way to Laramie after its most successful season in program history. USD set a program record with 25 wins and captured the program’s first conference title by winning a share of the Summit League regular season title. The Coyotes claimed runner-up honors in the Summit League Tournament.

Presented by the UniWyo Federal Credit Union, the UniWyo Invite will take place Sept. 1-2 as Wyoming will play host to Jacksonville, Purdue and Eastern Michigan. Jacksonville ended the 2016 season with a 9-19 overall record in addition to making its 17th-straight appearance in the ASUN Conference Tournament. Eastern Michigan will travel to Wyoming after an 8-21 season last year and 3-13 in the MAC. Purdue will be the first of five opponents for UW that qualified for the NCAA Tournament in 2016. The Boilermakers posted a 19-14 mark and advanced to the NCAA Second Round.

After the UniWyo Invite, the Cowgirls will make their way to the Pepperdine University Tournament and will face off against Missouri State, Washington and host Pepperdine on Sept. 8-9. The Waves ended 2016 with a 13-17 overall mark including a 7-11 record in the WCC. Missouri State fell to Ohio State in the First Round of the NCAA Championship last season. The Bears (26-9) recorded their most victories in a season since 2006 and included a Missouri Valley Conference regular season title. Wyoming will then take on the University of Washington. The Huskies season came to an end a year ago against Nebraska in the Elite Eight. Washington went 29-5 in 2016 and were ranked seventh in the final AVCA Coaches poll.

The Cowgirls will have 18 matches in MW play, including the Border War against Colorado State on September 26, and senior night against San Diego State on November 15. Nine of Wyoming’s 18 conference matches will be played at home this season. UW went 11-2 at home last year and dating back to the 2012 season, the Brown and Gold have a record of 69-12 in Laramie.

UW will open MW competition at home by welcoming UNLV and New Mexico on September 21 and 23, respectively, just before the Border War match. The Cowgirls will have two three-match road trips during conference play. They will face Air Force (Sept. 28), Utah State (Oct. 5) and Boise State (Oct. 7) before traveling to New Mexico (Oct. 19), UNLV (Oct. 21) and Colorado State (Oct. 24). Wyoming will kick off its second three-match conference home stand with Air Force on Oct. 27, before they compete against Boise State (Nov. 2) and Utah State (Nov. 4). To close out MW competition, UW will make its way to Fresno State on Nov. 18.

Wyoming is coming off an 18-13 campaign that included an 11-7 mark in MW play. Laura Beach and Kayla Slofkiss were each named to the All-MW team and were joined by Courtney Chacon to win 85 matches at UW. The 85 wins were third all-time as a class. Junior Reed Copeland ended 2016 ranked 28th in the NCAA in total blocks. Copeland was once named the MW Defensive Player of the Week, while sophomore Madi Fields was twice named Defensive Player of the Week and finished eighth in the conference in digs. In all, Wyoming returns ten letterwinners.

Fans can purchase season tickets through the Wyoming Athletics Ticket Office at 307-766-7220 or online beginning June 26.