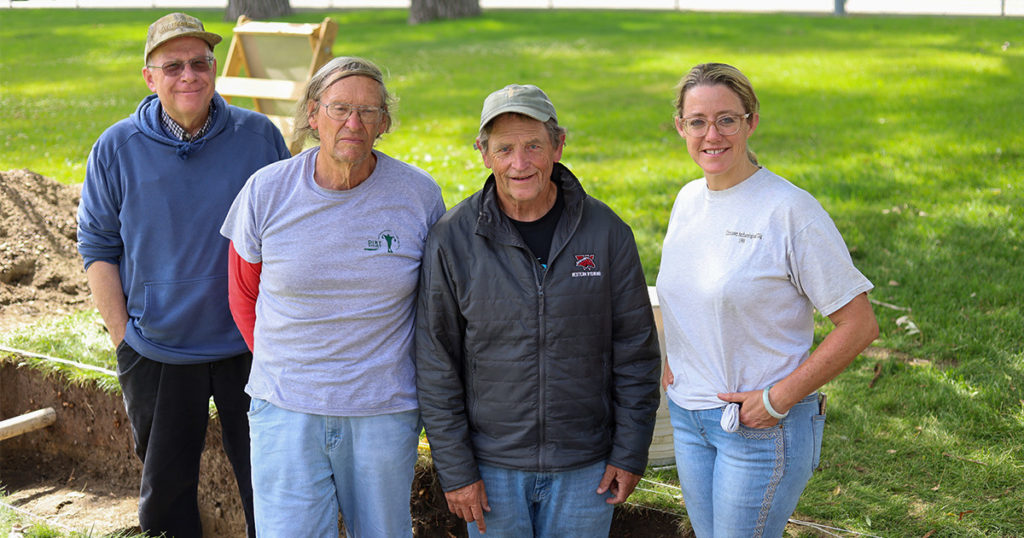 Dudley Gardner and his team of archaeologists are digging up history in downtown Rock Springs.

A few feet beneath the surface of the field next to the Saints Cyril & Methodius Parish Center, Gardner and his crew have revealed the story of old Chinatown in Rock Springs.

Gardner and his team are aiming to make Chinatown a National Historic Landmark. As one of the many checkboxes to qualify, there has to be evidence of intact culture deposits that haven’t been disturbed. Although there have been a handful of excavations of Chinatown, there hasn’t been a formalized excavation of the town, which is the purpose of the current dig that has been ongoing for the last month.

The strands of brown, yellow, grey and black soil tell the story of Rock Springs’ old Chinatown, which began around 1874 when the Chinese first appeared in Rock Springs. Previous excavations Gardner has been a part of, such as the one in 1990 revealed many details about the people of Chinatown including details about their diet.

On September 2, 1885, the Chinese Massacre resulted in the death of 28 Chinese coal miners and the arrest of 16 men charged with murder robbery, riot and arson. Chinatown was burned downed during the massacre, but quickly rebuilt the same month.

In 1913, the Union Pacific’s property began being subdivided, which led to the construction of a school near where the cottonwood trees on the field sit today. That school was in use up until the 1970s when it was tore down.

The Washington school was then built and the land was leveled where the field now rests along Bridger Avenue.

“Within the soil you can read those particular events,” Gardner said. “These [deposits] have been disturbed, but they are beautiful intact deposits left.”

Layer one is where the Chinese arrived in 1885. The team of archaeologists found broken Chinese ceramics in this layer during their dig.

“The nature of the artifacts we found, we think we’re in the street. This is one of the streets within Chinatown at this particular location in 1885,” Gardner said.

Layer two is the burning of Chinatown on September 2, 1985 during the massacre.

In layer three, this was from 1885 to 1913. This shows the occupation of the new Chinatown and Camp Pilot Butte. Around 60 homes had been rebuilt after the massacre.

Layer four is the Washington elementary school. In this layer Gardner and his team discovered shards of pencil and even a Snoopy toy, which he jokingly said they will gladly return it to its rightful owner.

Evidence of the Washington Elementary school was found with this Snoopy toy and a piece of pencil and lead. SweetwaterNOW photo, Brayden Flack

“The ultimate goal is to turn this into a national landmark,” Gardner said.

Should the evidence be enough, it would put Rock Springs’ historic Chinatown on the map with the likes of the White House in terms of National Historic Landmarks.