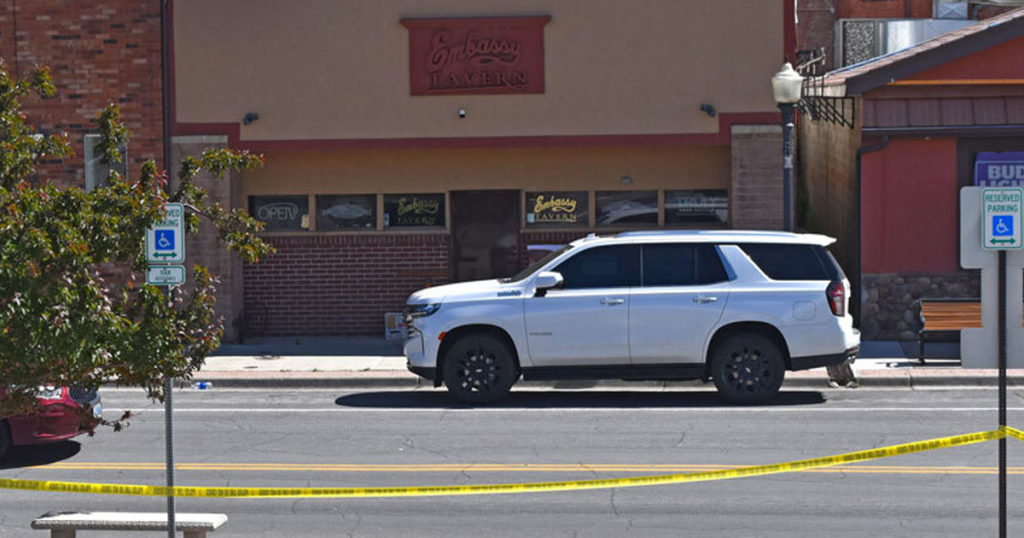 Wolf fled to Rock Springs after entering the Embassy Tavern on Railroad Avenue and killing two people in the late-night hours, according to the Green River Police Department. (Photo: Olivia Kennah)

GREEN RIVER — The suspect in a shooting that occurred in the late-night hours of June 23 at the Embassy Tavern Bar in Green River has succumbed to apparent self- inflicted injuries while being apprehended by area joint tactical law enforcement agencies.

The suspect has been identified as 51-year-old Douglas Wolf of Green River.

“Tactical teams including K9 Units located the suspect in an unoccupied industrial building on Mesa Dr. near Cathedral Dr. north of Rock Springs, alive, and still in possession of the firearm, which was pointed at his head. Upon contact, officers observed blood and an apparent self-inflicted gunshot wound. “

“As officers attempted to take him into custody, the suspect fired the weapon at himself. Tactical officers moved in and secured the weapon, then immediately began life-saving measures. The suspect was taken into custody and transported by ambulance to the Memorial Hospital of Sweetwater County, where he was officially pronounced deceased shortly after 11:00 a.m. this morning.”

“No shots were fired by law enforcement during the encounter, however, due to standard operating procedure for local law enforcement agencies in Sweetwater County, the investigation of the shooting in this portion of the incident has been turned over to The Department of Criminal Investigation for further investigation.” We want to thank Green River Police Department, Sweetwater County Sherriff’s Office, Rock Spring Police Department, Wyoming Department of Criminal Investigations, Combined Communication Center, Combined Tactical and Negotiation Teams, and BLM Rangers for their fast and immediate response.

Also, thanks to the Combined Bomb Team and Disposal Team for providing robots used for entry. We are deeply saddened by the loss of lives that have been taken by this senseless act. Our thoughts go out to
the friends and family of those affected by this tragedy.

The names of the victims in the shooting have not been release as of Friday afternoon. SweetwaterNOW will have more on this story as it develops.